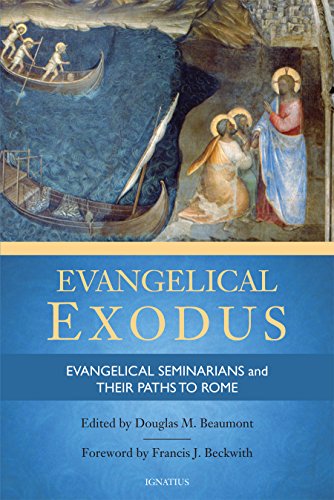 Evangelical Exodus is a compilation of the “conversions” to Roman Catholicism of nine evangelicals, all of whom were connected to Southern Evangelical Seminary (SES). The essays are irenic in their various explanations of these “conversions.” There is no vitriol or substantial invective against SES. All of the authors respect their former seminary and the teaching they received there.

When I first heard of this book, my interest was piqued, in part, because of my own background. I was raised in the Roman Catholic church, and then was converted in the context of dispensational evangelicalism. Because of this background, I was curious how someone could justify moving from evangelicalism to Rome. I detected three significant aspects to this movement from SES to Rome.

First, there is a unifying theme in each of these essays that almost every author recounts. It is explained in the introduction this way:

You may be thinking: How is it possible that such an august group of Catholic converts can arise from one small Evangelical seminary in one geographical region of the United States over only a few short years? One of the reasons, and certainly a very important one, was the type of theological formation that drew many of them to SES. As is well known in the Evangelical world, SES founder Norman Geisler is a self-described Evangelical Thomist, a follower of Saint Thomas Aquinas . . . perhaps the most important Catholic thinker of the second millennium. What Geisler found in Saint Thomas was a theologian whose view on God, faith and reason, natural theology, epistemology, metaphysics and anthropology were congenial to his Evangelical faith. (pp. 13–14)

The emphasis on Thomistic studies at SES led these students and faculty to pursue Thomas beyond the selective bounds of the SES curriculum. “What [these students] discovered is that one cannot easily isolate the ‘Evangelical-friendly Aquinas’ from the ‘Dominican friar Saint Thomas.’ There was no ‘historic Thomas’ with ‘Catholic barnacles.’ There was just Saint Thomas Aquinas, the Catholic priest” (p. 14). The book is dedicated to “The Dumb Ox” himself.

This testimony is echoed in virtually every contributor in the book. One author says that “for all intents and purposes, Saint Thomas Aquinas was the seminary’s ‘patron saint.’ Another author admits that “the first thing that brought me to Catholicism was the Thomism at SES” (p. 167). The notion that one could take only a part of Thomas’s teaching and leave the rest was suspicious to these evangelicals (p. 114; see also pp. 139, 156–57, 194).

The second theme that was not as prominent in each author but nevertheless contributed to their “paradigm shift” (p. 19) from evangelicalism to Rome was an almost total lack of church history in the SES curriculum (pp. 27, 98). This lack explains the contrast that one author saw between the individualism of evangelicalism, and the community offered by Holy Mother Church (p. 66). Without an adequate knowledge of church history, one might think that these are the only two options available. For example, the appearance of bishops, presbyters and deacons in early church documents was interpreted by at least one author as a defense of apostolic succession (pp. 55–56). A couple of authors quote John Henry Newman approvingly, “to be deep in history is to cease to be a Protestant” (pp. 80, 204). Another author notes that his interest in moving from Dispensationalism to a more “communal” view brought him to church history (p. 171). But his movement to a study of church history was viewed in the context of the church as an authority alongside Scripture.

The third aspect of these “conversions” is both most obvious as well as most troubling—the utter insufficiency of the theology taught at SES. This insufficiency, it seems to me, explains each and every “conversion” experience in this book. Though all authors would agree with this insufficiency, their analyses and critiques of it are themselves insufficient, since it motivated their conversion to Rome. Examples abound in the book (and this aspect could fill a book of its own), but we will have to be content with highlighting three of the most significant points.

The first insufficiency that these authors imbibed at SES is apologetic, or perhaps better, epistemological. The Thomism embedded in the SES curriculum spawns a rationalistic evidentialism for a Christian apologetic and as an epistemological base. So, as one author puts, it, “Reason was on prominent display. No questions of theology or morals were left untouched by the power of apologetics and rational demonstration” (p. 113). This is no minor problem. With this method “on prominent display,” for example, the Bible itself is subjected to an evidential epistemological foundation. For example, the founder of SES, Norman Geisler, argues that, though the Word of God is self-authenticating, the Bible is not: “For there must be some evidence or good reasons for believing that the Bible is the Word of God, as opposed to contrary views” (“Reviews,” Christian Apologetics Journal 11.2 [Fall 2013], 173). The evidential arguments used to “prove” the Bible to be the Word of God require that those arguments be the evidential foundation for biblical authority. Thus, biblical authority, by definition, is a derived authority. So also for Christian faith more generally. As one author, reflecting on his training at SES, says, “I had been trained to think that faith was bound up with inferences in such a way that the arguments were what secured faith” (p. 92). (It is worth noting that this particular author recognized that these arguments could only produce probable conclusions and were, thus, insufficient for Christian faith.)

In line with this, the Westminster Confession of Faith, in chapter one, section four, recognized that there are, at bottom, only two options when it comes to biblical authority.

The authority of the Holy Scripture, for which it ought to be believed, and obeyed, dependeth not upon the testimony of any man, or Church; but wholly upon God (who is truth itself) the author thereof: and therefore it is to be received, because it is the Word of God.

Either authority is conferred by some person (e.g., evidences) or church (i.e., Roman Catholicism), or Scripture is authoritative “because it is the Word of God.” (For a recent helpful defense of this view, see John Piper, A Peculiar Glory: How the Christian Scriptures Reveal Their Complete Truthfulness [Wheaton, IL: Crossway, 2016]). If one is trained to believe that authority comes from something outside of Scripture, it is a very short step from “evidential” authority to the authority of the church. In a switch from mere evidences, to churchly authority, Scripture is still dependent on something outside of itself so that one’s epistemology remains intact, but it is now “baptized” by the church. This “evidential” approach even leads one author to affirm the Roman teaching on the “Assumption of Mary” because “no body parts of Mary have ever been found” (p. 196)!

The second insufficiency of the training these authors received is in the notion of “Free Grace” that is prominent at SES (e.g., pp. 17, 140). The notion of “free grace” typically teaches that one can have Christ as Savior, but not as Lord. Thus, “to believe” in Christ has no necessary implications for Christian obedience. Specifically, “free grace” includes a couple of ideas, one that is conducive to Rome and one that, they think, Rome corrects. In agreement with Rome, these authors were taught that “God is not a divine rapist” (p. 53); conversion is not a monergistic work of God, but is synergistic. However, what Rome appears to these authors to correct is the separation between justification and sanctification that this notion of “free grace” requires. Many of these authors rightly saw this separation as unbiblical (p. 60). So, they conclude that Rome’s view of justification that includes both Paul and James—both faith and works—is the only biblical option (p. 62).

The third insufficiency of doctrine these authors were taught is dispensationalism. They don’t mention it as often as they might, but as I read their many reasons for converting to the Roman church, dispensationalism was between every line (see, for example, pp. 17, 39, 62, 66, 97–98, 102, 171, 250–51, 257). As one who was taught dispensationalism, I can testify that its effect is to so minimize the church such that it is practically irrelevant to one’s Christian life. The church’s “parenthetical” status in the dispensational plan of God, on its own terms, can never allow for vibrant Christian worship. These authors think they found such vibrancy in the mass and the sacraments.

There is so much more to say about this book. It concludes with appendices dealing with the canon of Scripture, the notion of Christian Orthodoxy, of sola scriptura and of sola fide. None of these appendices offer anything new to anyone familiar with discussions of these ideas. The book concludes by noting, surprisingly, that there are already enough converts to Rome from SES to fill two more books of this size (p. 209), so we likely haven’t heard the last from this group.

As I read those who moved from evangelicalism to Catholicism, I couldn’t help but think of my own experience. As one who moved from Catholicism to evangelicalism, I have to agree with the authors’ assessment of the insufficiency of evangelicalism. But the proper movement is not to Rome, but back to Scripture. The best and biblical option in the face of these “conversions” is embedded in the beauty of Reformed theology. A proper understanding of the self-authentication of Scripture, of union with Christ (from which both justification and sanctification necessarily flow), of the church as God’s chosen vehicle of the means of grace (the Word, sacraments, and prayer) for all who are in Christ, brings a biblically rich and glorious response to anyone who would contemplate “swimming the Tiber” (p. 23). The most natural transition for evangelicals is not to Rome, but to the glorious truths that flowed from the Reformation, where alone can be found the self-authenticating Christ of Scripture.