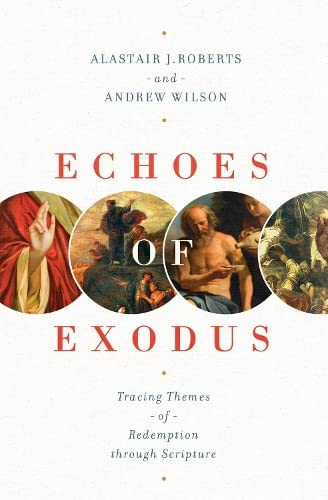 It is not often that one gets to review two books on the same topic, published in the same year, and bearing the same title. These volumes invite comparison even as their respective subtitles set expectation for intertextual and biblical-theological analyses of Exodus. This is an important pursuit, for “no other event is as basic to the fabric of both Testaments” and yet it is challenging to interpret this motif precisely because it is so pervasive ( “Exodus, Second Exodus,” in Dictionary of Biblical Imagery, ed. Leland Ryken et al. [Downers Grove, IL: InterVarsity Press, 1998], 253).

Alastair J. Roberts is fellow of Scripture and Theology with the Greystone Theological Institute and Andrew Wilson is teaching pastor at King’s Church London. Their stated purpose for Echoes of Exodus is to convince readers that “Scripture contains all sorts of connections, riffs, and themes” which may have heretofore been missed, and to do that by showing rather than telling (p. 13). The authors state they will err on the side of hearing echoes (p. 14) as they develop their controlling metaphor: “Scripture is music” (p. 21). Consistent with this metaphor, Exodus motifs are approached as “perhaps the clearest example of a recurring, time-consuming, rhythmic, melodic theme in the entire Bible” (p. 27).

The remaining twenty-one chapters listen to the rhythmic melody of the exodus by focusing on select biblical sections. Passover motifs in Matthew 26 form the “Overture” (ch. 2). This leads in turn to exploration of Exodus 1–Judges 7 (chs. 3–6) as the “First Movement.” Chapters 7–10 shift discussion back to Genesis on the basis that Genesis 3–6 looks remarkably similar to Exodus 1–2 (p. 61). The re-echoing of exodus themes in Ruth, Samuel, and Kings is treated in chs. 11–15 before a brief look at the Prophets (ch. 16) and Ezra-Nehemiah (ch. 17) concludes the focus on the OT. The book’s “Fourth Movement” dedicates five chapters to unveiling exodus motifs in the Gospels (2 chapters), Acts, Romans–Jude, and Revelation.

Roberts’s and Wilson’s study is wide-ranging and teems with textual observations and proposed parallels. Many are insightful. The sections charting how Exodus functions as intertext in the Gospels (pp. 125–29) and Revelation (pp. 150–51), for example, are excellent. Other proposals, however, remain much more tenuous—like Israel’s so-called “birth” in Exodus 12: “Israel steps out from the womb through doorposts covered in blood … and later emerges into new life from a narrow passage through waters, which then close again behind them” (p. 44). Although the authors recognize that not all parallels and connections are equally probable, in practice they are given identical weight. I will return to the methodological questions this raises below. It is also difficult to discern which exodus Roberts and Wilson are trying to hear echoes of. The discussion moves between identifying lexical and thematic similarities with the book of Exodus, approaching exodus as a paradigmatic geopolitical event, and investigating patterns of divine deliverance considered more broadly.

Bryan Estelle is professor of Old Testament at Westminster Seminary California. He states his aim as follows: “My goal throughout this book is to help readers grow in their ‘allusion competence,’ especially in their ability to recognize scriptural allusions to the exodus motif” (p. 2). Estelle proceeds to lay a hermeneutical foundation by surveying intertextual theory—including criteria by which to assess possible allusion (pp. 19–39; further treatment appears in an appendix [pp. 327–51]). He also makes a case for reinstating typological readings of Scripture, advocating a stance that lies somewhere between historicist and allegorical approaches (pp. 39–60).

With these principles in place, Estelle proceeds canonically to tease out how and why exodus motifs are used. Chapter 2 explores exodus themes in Genesis and helpfully addresses the wider relationship between creation and redemption. Chapter 3 turns to the book of Exodus where Estelle summarizes the essential motif as follows: “deliverance from the enemies of Israel in Egypt and the wilderness wanderings as described in the Sinai pilgrimage, which culminate in the arrival at the foot of the mountain of God” (p. 102, italics removed). This formulation sets parameters for discussion of Exodus resonances in the Psalms (ch. 4), Isaiah (ch. 5), and in the exilic and postexilic texts (ch. 6). Throughout, Estelle demonstrates the inner-biblical exegesis at work—that is, not just quoting Exodus material but actively reworking it. Five more chapters survey NT material: Matthew and Mark (ch. 7), Luke-Acts (ch. 8), Paul (ch. 9), 1 Peter (ch. 10), and Revelation (ch. 11). A strong case is made regarding the importance of exodus grammar for hearing the message of the NT. Again, Estelle reveals how images and themes are not simply repeated but are advanced and supplemented. For instance, 1 Peter’s contribution is summarized as an ecclesial reading of exodus motifs in which the church is conceived as liberated Israel (p. 296).

Both iterations of Echoes of Exodus are full of valuable insights and unquestioningly demonstrate the importance of exodus motifs for biblical interpretation. Yet, comparing the volumes is revealing and underscores the potential benefits and dangers of intertextual readings of Scripture. Although both are shaped by similar agendas, the end results are markedly different. To be fair, Roberts and Wilson have written a shorter work aimed at a popular audience whereas Estelle has produced a longer, more technical book suited for higher-level study. Nevertheless, a degree of criticism is warranted.

The lack of methodological constraint felt when reading Roberts and Wilson is only thrown into sharper contrast when put alongside Estelle. Throughout, Estelle’s explicit hermeneutical framework tempers his exegesis; connections and parallels are demonstrated rather than assumed. Subsequent discussion of function thus has a secure footing. For Roberts and Wilson, however, proposed connections are at times simply incorrect or slide towards the allegorical. The former is exemplified on p. 66 where the town of Haran is said to be named after Abram’s brother, even though the words are different (חרן vs. הרן). The latter is seen in the conjecture that, akin to Pharaoh’s piercing (Isa 51:9), so “Goliath is pictured as a villainous snake, covered in scaly armor (1 Sam. 17:5)” who ends up with bruised head (p. 94). No explanation is given for why armor made of “scales” (קַשְׂקֶשֶׂת) in 1 Samuel 17 should relate to snakes, let alone the Genesis 3 serpent (elsewhere, קַשְׂקֶשֶׂת is used for fish, not reptiles). Moreover, this strained connection obscures the more obvious intertextuality: Goliath falling over and losing his head as divine judgment resembles the fates of Dagon and Saul, not Pharaoh. The more fundamental issue concerns authorial intent. While intertextual theory accommodates reader-centered synchronic approaches in which connections remain in the eye-of-the-beholder, these must necessarily jettison original intent. While I suspect the authors involved want to hold on to intended meaning, the lack of methodological constraint subverts that end for Roberts and Wilson.

In his conclusion Estelle hopes that he has demonstrated a responsible use of intertextuality (p. 318). By and large, I think he has. I don’t think Roberts and Wilson succeed to the same degree. Nevertheless, for discerning readers, both volumes reveal the wonderful tapestry of allusion and echo that continually recalls the exodus, whatever part of the Bible you are in.