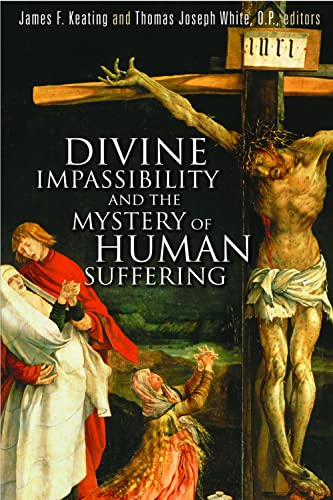 Divine Impassibility and the Mystery of Human Suffering

Theology must address the concerns of the present if it is to serve the church that ministers in the world. Yet theology also owes its commitment to its own resources and its heritage, the communion of saints. Sometimes the pull of the present and the principles of the past seem at loggerheads. In our own day, the classical doctrine of divine impassibility has been seen by many to conflict with our deep, contemporary awareness of human pain and agony. It is precisely in a situation such as this that our greatest theological efforts are needed, and Divine Impassibility and the Mystery of Human Suffering is meant to serve as a needed resource to shape future conversations along these lines.

The book comes from a conference hosted by Providence College in March 2007 on this perennial and pertinent topic. The essays range across the historical and dogmatic landscape. Chapters address the approach of the patristic era, Cyril, Hilary of Poitiers, Thomas Aquinas, and Karl Barth. Other chapters are organized topically, relating divine impassibility to a host of related doctrines, approaches, or problems: divine immutability, two natures Christology, patripassianism, the dereliction of Christ, divine transcendence, and divine providence. The contributors are top-notch, including Gilles Emery, Bruce Marshall, and Paul Gondreau among their ranks, to name but three. As with any collection of essays, the length and quality varies somewhat. In the interests of space, I will highlight only a select few.

Perhaps the most interesting feature involves the scuffle between Thomas Weinandy and Robert Jenson. In his essay “God and Human Suffering: His Act of Creation and His Acts in History,” Weinandy unpacked Jenson’s account of God, his actions in history, and the manner in which he creates (p. 100). He argues that Jenson’s project will not hold together: “His view of God renders God impotent to create, and so his articulation of God as Creator is, as a consequence, philosophically, utterly naïve and, theologically, wholly inadequate” (p. 104). The key concern for Weinandy is that a being that is “in act in one manner and is capable of being in act in a subsequent manner through change” could not create from nothing (p. 105). Thus, Jenson’s revised doctrine of God—as only defined from the future—cannot be held together with his traditional understanding of creation from nothing. Weinandy goes still further and suggests that not only creation but the acts of God in history, namely, the gospel story, cannot be performed by this kind of God, as described by Jenson (pp. 109–16). Then in the introduction to his chapter “Ipse Pater Non Est Impassibilis,” Jenson responds with exasperation that Weinandy transgressed some rules of the conference, even more so that Weinandy judged Jenson’s past proposals by a foreign metaphysical rule. Jenson notes that all theologians carry the burden of thinking of God after the “profound questions raised by pre-Christian Greece’s religious thinkers, and in responding to transform them” (pp. 117–18).

Surely the most important essay in the volume is Paul Gavrilyuk’s “God’s Impassible Suffering in the Flesh: The Promise of Paradoxical Christology.” The chapter summarizes much of the work done in his remarkable monograph The Suffering of the Impassible God: The Dialectics of Patristic Thought (Oxford Early Christian Studies; New York: Oxford University Press, 2006). Gavrilyuk points to the importance of noting the context and intent of divine impassibility in patristic thought: “divine impassibility is primarily a metaphysical term, marking God’s unlikeness to everything in the created order, not a psychological term denoting (as modern passibilists allege) God’s emotional apathy” (p. 139). I might add that this distinction marks a crucial need of the hour: for advocates and critics alike of the classical tradition of divine attributes to inquire after its original intent (e.g., recent criticisms of the language of instrumentality as applied to Christ’s human nature show little to no awareness of its intent; one could say the same thing for criticisms of Thomas Aquinas’s denial that God has real relations with us, a statement that can sound ghastly if taken out of context but which has a perfectly comprehensible meaning when one takes it on its own terms). What Gavrilyuk terms “paradoxical Christology,” then, follows these patristic thinkers in holding together two things that seem contradictory but, biblically and in light of the gospel, are not: “God, as God, does not replicate what we, as humans, suffer. Yet in the incarnation God, remaining God, participates in our condition to the point of the painful death on the cross. Remaining impassible, God chooses to make the experiences of his human nature fully his own” (p. 148).

As in a number of essays published elsewhere, Bruce McCormack’s essay in this volume (“Divine Impassibility or Simply Divine Constancy? Implications of Karl Barth’s Later Christology for Debates over Impassibility”) seeks to show that Barth cannot be read as a Chalcedonian theologian, if by that description one means that he remained committed to the metaphysics implicit in the Chalcedonian definition; of course, McCormack does not mean to suggest that Barth is not Chalcedonian, though he wants to identify Barth’s Chalcedonian commitment as, we might say, according to the spirit and not the letter (p. 158n20). His thesis is blunt: “Barth’s later Christology leaves no remaining room for any doctrine of divine impassibility” (p. 184). McCormack argues that Barth’s revised doctrine of election (in Church Dogmatics II/2) led him eventually to revise his doctrine of God in such a way that impassibility has no validity. McCormack realizes that Barth is not fully consistent in this regard, whether before volume four or even throughout that magisterial fourth volume of the Church Dogmatics (p. 172n58). As we have come to expect from McCormack, he provides a nuanced reading of and beyond Barth; one wishes only that his proposals could be put in direct conversation with, say, the patristic studies of Paul Gavrilyuk. Even if we were to accept McCormack’s reading of Barth, is Barth’s theology really so far from the paradoxical Christology of Cyril? The verdict is still out, it seems. And, of course, many of us continue to find a more classical reading of Barth to be entirely plausible, even if not without its own exegetical complications, which would reframe the debate entirely (as argued, for example, by George Hunsinger and John Webster).

The debate about divine impassibility is not ending anytime soon. Students and pastors could do no better than read through this volume to gain understanding of the resources in the tradition and the challenges raised against it. Essays by Emery and Marshall, Weinandy and Gavrilyuk, for instance, will help see the biblical reasoning and philosophical critique intrinsic to the long-standing tradition regarding divine impassibility so that criticisms of that tradition will not be plausible unless they are nuanced and truly engaged with the material claims of the patristic and medieval fathers. And essays by Culpepper and McCormack will demonstrate the lively revisionary process that has been ongoing in the last few decades and, indeed, has roots much deeper in the tradition of kenotic Christology so that students can see the various impulses and approaches toward revision. Because the gospel is only as good as the character of its God, we must carefully consider our thinking about the triune God revealed in Jesus Christ. This book will be a genuine help in that regard.