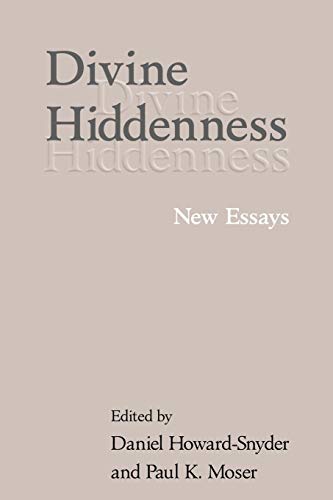 For many people it is not clear that God exists. J. L. Schellenberg has used this as the basis of an atheistic argument in his Divine Hiddenness and Human Reason (Cornell, 1993).

His argument is that a loving God would reveal his existence clearly enough for everyone who wanted a relationship with him to have one. This revelation would not have to be overwhelming or coercive, merely clear enough to avoid blameless unbelief. However, there are blameless unbelievers, e.g. honest, conscientious seekers who find the evidence unclear, despite wanting to believe and even engaging in religious practice. So if there were a God there would be no blameless unbelief, but there is blameless unbelief, so there is no God. Insufficient evidence for God is evidence against him.

The introduction outlines two main responses. The first is to deny that love would always motivate God to reveal his existence. There may be reasons for God to hide himself. The second response suggests that apparently blameless unbelief might really be blameworthy. In subtle ways sin blinds one to evidence for God.

Peter Van Inwagen suggests that it is always possible for sceptics to explain away miracles e.g. by space aliens. When sceptics demand signs Christians should reflect on Luke 16:31.

If they do not listen to Moses and the prophets then neither will they be persuaded even if someone should rise from the dead’ and John 20:29 ‘blessed are they who, not being believe.

J. L. Schellenberg suspects that a loving God would give equal religious experience to everyone-blaming apparently blameless unbelief on sin seems uncharitable. Michael Murray defends the ideas that God hides himself to avoid coercing us to be good; even uncertain threats or rewards can be on offer we can refuse.

Laura Garcia notes that Roman Catholicism teaches that those who blamelessly fail to believe in God can still be saved, and investigates the theology of St John of the Cross. In ‘the dark night of the soul’ the believer is deprived of understanding and experience so as to love God solely for himself.

William Wainwright explores Jonathan Edwards’ idea that sinners do not lack evidence of God but the ‘true benevolence’ necessary to handle the evidence correctly. Nonbelievers might want to believe, but may want other things more, or want to avoid the radical changes involved. Wainwright suggests that those who blamelessly fail to believe might still relate to God through moral experience.

Paul Moser argues that God wants us to trust and obey him and that he may hide himself from those disposed to disobedience. Jonathan Kvanvig argues that, to the extent that one is unconvinced by the problem of evil one should the unconvinced by the ‘Argument Hiddenness’, for similar responses can be made to both. M. Jamie Ferreira defends a Kierkegaardian view of faith. Christian faith involves absolute commitment, so more uncompelling evidence is irrelevant. Jacob Joshua Ross argues that sophisticated theologies put God beyond personal properties like being loving. He doesn’t explore whether such theologies undermine traditional religious hope and worship.

Paul Draper argues that there are various facts that make God’s existence more or less probable, but he cannot determine the overall probability. This goes for the Argument from Hiddenness too, so he remains agnostic. The ambiguity of the evidence might even favour the existence of God, since God might have reasons not to make himself too obvious.

Nicholas Wolterstorff claims that the Bible suggests that God intends everyone to flourish and be full of years, but is silent as to why this is not so. One is left echoing the faithful prophets in the Bible.

Overall this is a useful collection of essays, on a fundamental topic and should be required reading for all serious students of apologetics and philosophical theology.