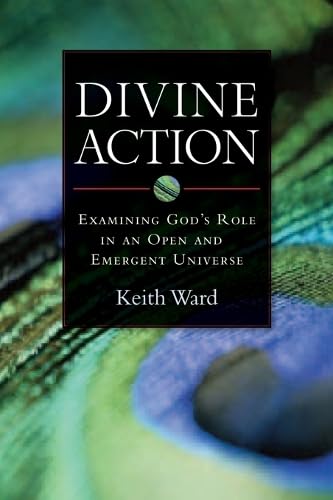 I first heard of Keith Ward when I lived in Britain in the late 1980s when Ward took on the skepticism of Don Cupitt, whose 1980 Taking Leave of God caused a stir. I therefore expected a strong philosophical case for a fairly traditional view of God’s action in the world; and the preface reinforced that expectation: “This book is a defense of a strongly supernaturalist idea of God as a purely spiritual creator of and personal agent in the cosmos, who was incarnate in the person of Jesus, who answers prayers and performs miracles” (p. vii).

The book was originally published in 1990, based on lectures given in 1989, the main changes being the addition of a preface and a list of further reading. In the preface Ward reaffirms that his topic “remains the most central and difficult question for thoughtful Christians who are aware of the findings of modern science.” (It is common with contemporary writers on science and faith issues to suggest that the advances of the sciences may challenge deeply-held aspects of our Christian worldview, but in my judgment the really tough questions, having to do with the problem of evil and the nature of human freedom, have always been with us and are not put to us any more forcefully by scientific advances as such—though they may feature prominently in popular philosophizing.)

Ward writes as a philosophical theologian, and people (such as myself) trained in a more exegetically oriented fashion should not expect serious wrestling with biblical passages. Indeed, his writing style at times left me wondering who exactly he envisioned as his proper audience and what criteria he uses for a successful argument. I will return to this question anon.

The book has fourteen chapters. In the first chapter, Ward argues that the statement “God exists” is “a logically necessary truth, in the sense that it cannot be denied without contradiction” (p. 13). Ward shows good judgment when he finishes a very abstract discussion by coming down to earth:

So the sense of divine necessity is not merely an abstract concept: it is an apprehension of the faithfulness of being, of unlimited power, rooted in the experience of worship and confirmed by revelation. (p. 16)

The next chapter, on “Divine freedom and necessity,” is a further abstract discussion leading to the following sensible conclusion:

It follows that it would be wrong either to think of God as excluded wholly from particular action within the world; or to think of him as doing absolutely anything he wants at any particular moment of the world’s history. (p. 37)

The importance of this is that we are not in a position a priori to rule out miracles from God’s interaction with his world. Although I am happy with the conclusion, there are steps along the way that foreshadow some of his later argument, namely, the conception of God as not fully sovereign over his creation (p. 33):

One might think, instead, of God bringing some initial state into existence, which has a future development not entirely determinate, but which he can help to determine by the exercise of his supremely imaginative creativity.

Chapters three through seven address the problem of evil. Here he advocates a notion of God’s relation to the world that departs in important ways from the traditional Christian view. He seems to agree with modern theologians who no longer accept any account of the fall of mankind and of Satan (p. 40), and he suggests, “If suffering and destruction are ever possible in any world, they are necessarily included in God, not freely chosen by him. Thus God is not free to eliminate the possibility of suffering” (p. 43). He tells us,

[M]any of the conclusions of modern physics delineate a picture of the universe which even more clearly helps one to understand how suffering and destruction are necessary features of a universe in which alone beings like us can exist, (p. 62)

He is referring to notions from chaos theory and quantum mechanics in which “the future cannot be predicted wholly from the physical past” (p. 63). This, he assures us, gives us a “probabilistic physical system, open to the creative shaping of the divine imagination at very many points” (p. 65). Throughout these chapters he seems to equate the unpredictability one finds in modern theories in physics with freedom, which seems to me to be an impossible equation to defend. If I say that my actions are “free” when they are not physically determined, I do not mean that they are un determined. When I “freely” choose to do a moral action, I am conforming my action to some principle that goes beyond the physical.

Ward defends his position with the assertion, “God cannot create a universe in which free creatures always choose the good” (p. 68). He never considers the obvious problem this produces with the traditional picture of everlasting bliss: does he think we will not be “free” in the glorified state? He also ends up with a notion of sin that cannot be squared with the biblical picture: it is no longer an invader in God’s god creation; it is now a native.

In chapter 8, Ward takes up the question of “the particularity of providence.” Here he is clear: [M]y suggestion is that disasters happen by nature, that God cannot eliminate all, or even most, of them. But he can save some from disaster.… God’s providential action does not have human happiness, whatever its character, as its aim. His purpose is to increase true knowledge and love of the Divine nature, without undermining human freedom, (p. 143)

He finishes the chapter with this conclusion: “It is a wholly misleading picture of God which thinks of him as able to heal or help everyone, but as choosing only to help a few people, apparently at random” (p. 153). This last phrase, “apparently at random,” is an astonishing caricature of traditional positions. Does Ward think that this is the only alternative to his view, or that anyone actually holds the position in the way he states it?

Chapter 9 deals with “prayer as participation in divine action.” Ward argues that since the divine plan is largely open, God may consent to do something simply because it is requested. Ward characterizes what he calls the Augustinian-Thomist tradition: “the main problem of prayer is how a changeless God can be affected by prayer at all” (p. 160)—a position he rejects. Now the literature on this topic is enormous, and no one chapter can interact with it all. At the same time, Ward really should show us that he has read what is out there and that he can do justice to it; he has not done so. There is also very little grappling with Scripture.

In chapter 10, Ward argues for the possibility of miracles. He rightly insists,

The sceptical eighteenth century philosopher David Hume performed a great disservice to religion (as he intended to) when he defined a miracle as “a transgression of a law of nature by a particular volition of the Deity, or by the interposition of some invisible agent.” (p. 179)

He also helpfully critiques the modernist theology of Paul Tillich. At the same time, when he seems to limit miracles to God acting “in response to the prayer and faith of creatures” (p. 182), he leaves me wondering if he is implying that God cannot take the initiative—neither the Red Sea crossing nor the resurrection of Jesus are presented in a way that matches Ward’s description.

In chapter 11, Ward deals with revelation and pluralism, arguing, “It is not intolerant or absurd to claim that in the life, death and resurrection of Jesus of Nazareth, there exists a definitive embodiment of God’s own activity for human redemption, which is the matrix for interpreting the Divine activity everywhere” (p. 210). This is good, though along the way he makes some surprising concessions about the inadequacies of the Biblical writers as vehicles of revelation.

Chapter 12 helpfully defends the unique divine incarnation in Jesus, while chapter 13 is a valuable discussion of two key questions: can one legitimately base one’s life on historical accounts, and may we properly derive a doctrine of incarnation from the Gospels? Chapter 14 finishes the book with reflections on the consummation.

Ward’s presentation of his approach did me the service of making me evaluate whether my own views are adequate for the issues he discusses. Thus, even in disagreement—at times strong disagreement—the book did me good.

At the same time, Ward’s overall style of argument suffers from some serious methodological problems, in addition to some of the content problems I have already mentioned. Although he rejects many aspects of traditional theology, he does not show any real awareness of how that tradition has addressed the topics he raises. Perhaps this is because he does not think that the tradition has addressed those topics, or perhaps it is because he thinks that modern science has faced us with challenges that our forebears did not face. In either case I think he is mistaken. Often when he summarizes traditional views, I could not recognize myself in the description, and I wondered whether he had any real contact with an educated traditionalist.

Further, in discussing “suffering” and “evil,” he never really defines them. Is all suffering evil? Is animal death evil, and are all natural catastrophes (such as the extinction of the dinosaurs) evil? I do not know how Ward would answer these nor whether I would agree with his answers, but I do know that he should at least deal with the definitions.

Finally, such appeals to Scripture as there are in the book are normally superficial in their exegesis. Since this is supposed to be a work in Christian philosophical theology and since Ward (at times, anyhow) speaks appreciatively of Christian revelation, I am left wondering why he spends so little time on the Bible itself. Partly it seems this is because critical views of the Bible’s origin have demoted its content to secondary status, and Ward seems unaware of what this does to Christian faith to begin with. This shows the need for careful exegetes to demonstrate the proper place of biblical material in philosophical discussions.

In sum, I do not know what Ward would do with such biblical passages as Matt 10:29–32 (the fall of a sparrow) or Isa 10:5–19 (Assyria as the unwitting tool of God’s purposes). There are tensions here, to be sure, and each of us must decide what he can live with. But Ward’s solutions do not seem to leave us with a God who really achieves his holy will. So while I am grateful for his positive affirmations of God’s freedom to act in his world, I am confident that one need not abandon conventional Christian metaphysics in order to do so responsibly.