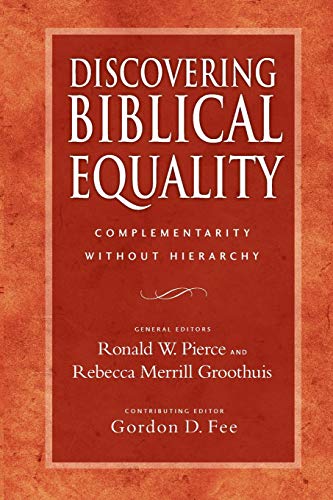 IVP have published a major work on each side of the gender debate this year (British edition). Discovering Biblical Equality is a coming together of the best ‘egalitarian’ scholars to respond to ‘complementarian’ arguments, most notably the 1991 volume Rediscovering Biblical Manhood and Womanhood. There are twenty-nine contributions, divided into historical (the roles of women in ministry in the past), biblical (examinations of key texts), theological, hermeneutical and practical. It is compehensive in its scope but more striking is its coherence: The editors have done a very thorough job to ensure that the contributors speak with one voice. The chapters are repeatedly cross-referenced to each other and do not overlap or offer contradictory approaches to the key questions. For a coherent and detailed response to the complementarian position it is unrivalled, containing potted versions of the strongest arguments put forward to date (Kevin Giles on the Trinity, Fee on 1 Corinthians, etc.) in the context of an overall approach which is internally coherent, even if it is still open to external critiques.

Evangelical Feminism and Biblical Truth is an extraordinarily thorough and user-friendly guide to the complementarian critiques of the ‘egalitarian’ or ‘evangelical feminist’ position. Grudem sets out his own viewpoint clearly and then addresses no less than 118 key arguments put forward by ‘egalitarians’. I could not think of a single important issue he does not engage with, including all the major questions raised by Discovering Biblical Equality. The contents pages are laid out so that the reader can locate quickly the section (usually between one and five pages long) which addresses any given issue. The last 200 pages are made up of some fascinating appendices including a complete list of the 82 examples of authenté (‘to exercise authority’) in Ancient Greek Literature and a selection of policy statements of denominations and organizations regarding women in ministry. It is unlikely that many will read the volume cover to cover but it will make an extremely valuable reference book for anyone wishing to engage seriously with what the Bible says on these questions.

Reading the books together, two major issues stand out. Firstly, what are orthodox hermeneutics, and, secondly, what is the orthodox doctrine of Trinity?

On the hermeneutical question, the contributors to Discovering Biblical Equality (notably I. H. Marshall, Gordon Fee, William Webb) take an attitude to Paul’s teaching which consistently treats his ethics as part of a ‘trajectory’ which we must now develop further. This often sounds very plausible, but Grudem argues that it is actually a dismaying position to take regarding the final authority of Scripture. The view reaches its most shocking expression in Marshall’s contribution on the household codes:

All recognize that the Christian revelation takes us well beyond the OT revelation (and renders some aspects of it obsolete). By analogy, the growth in understanding of Christian revelation under the continuing guidance of the Spirit may lead us to apply some culturally specific parts of the New Testament in a way that does not compromise its supreme authority for us (201).

This reader would question the validity of the analogy. The NT authoritatively teaches us how Jesus has fulfilled the OT, and nothing has changed since then. We are still in the last days, still living in cultures marked by their rejection of God, and still need to work at understanding and applying that definitive revelation which will often be profoundly counter-cultural, as it was at the time it was written. The ‘trajectory’ argument seems to amount to placing one’s final authority not in Scripture, but in the place towards which one thinks Scripture was heading. The possibility is opened up for all manner of ‘development’ of unpopular NT ethics to suit today’s ‘insights’ (or perhaps blindspots?). Although Marshall states this view the most dramatically, the key chapters on Pauline texts and on hermeneutics (such as Webb’s ‘Redemptive-movement hermeneutic’) show a very similar approach. In one appendix, Grudem deals in detail with Webb’s approach.

The second issue is harder to adjudge. The major theological underpinning of the complementarian view is the supposed equality-and-subordination within the Trinity. Giles claims this view is not the historically orthodox one found in the creeds, Athanasius, Augustine or Calvin. Grudem counters that Giles’ thesis runs counter to the research of world-renowned theologians such as Hodge. Berkhof, J. N. D. Kelly and Bromiley. Both Giles and Grudem quote the Fathers and church historians at length to support their respective positions. However, one is left with the sense that, of the two, Grudem is the more diligent in his engagement with the biblical witness on the Trinitarian relationships, without neglecting the historical debate. Giles shows an unwillingness to confront the relevant biblical data, such as repeated statements concerning the Father’s predestining of his people in the Son (prior to human history, let alone the Incarnation) and the Son being finally made subject to the Father. Egalitarians need to address the biblical as well as historical questions in this debate.

These two weighty tomes are accessible to any interested reader and give a comprehensive picture of this vital question for the church.