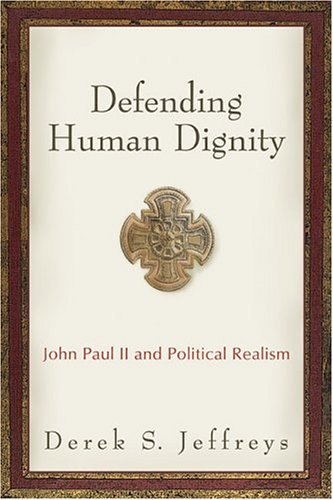 Without any doubt, pope John Paul II (1920–2005) has been one of the most important political figures of the second half of the twentieth century. Consequently, any attempt to evaluate his wide-ranging contribution to world, history should take into consideration his political views and actions. Written by a professor of humanistic studies at the University of Wisconsin, this book primarily deals with the former and traces Wojtyla’s political thinking in the interface between his philosophy of being and his value-based ethics.

Being aware that John Paul II is a ‘complex thinker’ (30) who has drawn on numerous sources, Jeffreys indicates how influential has been Max Scheler on Wojtyla, thus showing how the pope relied heavily on the latter’s phenomenology. Wojtyla’s conceptual political framework stems from a critical engagement between his Thomistic philosophy, based on concepts such as ‘act’ and ‘potence’, the ‘will’, ‘truth’, etc, and Scheler’s phenomenology, especially his views on the intentionality of value. John Paul II’s goal can be seen as using ‘phenomenology within Thomism’ (192), thus updating the traditional Catholic social thought with compatible modern insights. The new impetus given by the pope to the social doctrine of the Roman Catholic Church is an indication of the importance of the subject.

Jeffreys convincingly argues that the background of John Paul II’s reflection is to be found in the powerful challenge posed by political realism in political affairs, both at local and global level. According to political realism, politics is a power game in which the analysis of consequences is the primary political criterion. In this way, sheer consequentialism is devoid of ethical considerations such as the value of the person. Its main concern is to be an instrument in the hands of political actors. In national and world politics there are many examples in which the exercise of power is valueless and only interested to serve its own goals. Wojtyla’s first hand experience of Nazism, then Communism, and eventually un-ruled global capitalism provided an extraordinary platform for him to engage with these issues.

According to Jeffreys, John Paul II had tried to fight against political realism, always framing his political thought in a philosophical grid (i.e. Thomistic metaphysics) and ethical vision whereby the centrality of the person is primary. While being mainly sympathetic with the pope, Jeffreys questions whether John Paul II’s positive attitude towards the United Nations was consistent with his attack to political realism, given that the UN is largely governed by consequentialism, in spite of its formal adherence to a value-based juridical framework.

An issue that Jeffreys does not tackle is whether the Roman Catholic Church under John Paul II has been in danger of consequentialism in its politics in the world scene, bearing in mind that the Catholic Church is both church and state (i.e. the Vatican). For example, has the Vatican Bank (IOR) always invested its money in an ethically responsible way? Has the Vatican state always dealt with totalitarian regimes with a prophetic voice and behaviour? Has the Vatican diplomacy always participated to world politics in an alternative way to sheer consequentialism? Apart from tracing the philosophical milieu of his political views, these questions would be an interesting case-study to test the degree of coherence between the political thought and action of John Paul II.