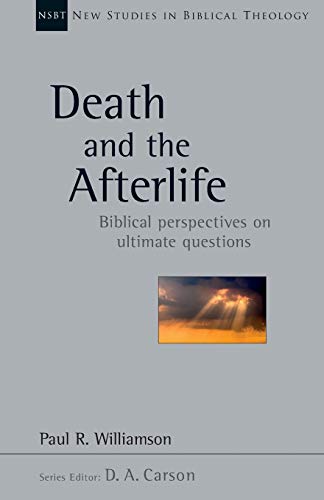 Death and the Afterlife: Biblical Perspectives on Ultimate Questions

Paul R. Williamson (Lecturer in Old Testament, Hebrew and Aramaic at Moore College, Sydney) has produced a timely and informative contribution to the New Studies in Biblical Theology series. In response to recent challenges to traditional views regarding personal eschatology, Williamson surveys the biblical teaching on the intermediate state, resurrection, judgment, hell, and heaven. The book is very well organized. Each chapter introduces a recent challenge from within evangelicalism and then surveys the Old Testament teaching on the subject, intertestamental developments, and the New Testament teaching on the subject.

Chapter 1 briefly explores contemporary perspectives and misunderstandings of the biblical perspective, then surveys ancient Near Eastern and Graeco-Roman perspectives, and finally outlines the various biblical issues that will be tackled later in the book. Williamson holds that personal eschatology was progressively revealed so that the fullest understanding of it does not come until the New Testament, though the Old Testament already anticipates where the New Testament will go. In Chapter 2, Williamson defends the idea of an intermediate state, arguing that the Bible supports a “dualistic holism” in which the soul can exist apart from the body, though the soul is incomplete until reunited with the body.

In Chapter 3, Williamson defends the traditional view of resurrection, which he argues comes not from Persian influence but from an incipient pre-exilic resurrection hope that comes to fruition as God’s people later face crisis. While Williamson rejects claims that Psalm 1:5 or Hosea 13:14 or Job 19 has a resurrection in view, he holds that “the germ for such belief was present in what [the Old Testament authors] understood about Yahweh” (p. 81), as one with the power to raise the dead (Deut 32:39: 1 Sam 2:6). The last part of the chapter surveys the New Testament teaching on the subject and shows that the resurrection “will occur on the last day, and not a moment before” (p. 93).

Chapter 4 defends the view that the final judgment is according to works. After considering Old Testament types and predictions of “the day of Yahweh,” Williamson argues that Matthew 25:31–46; Romans 2; and Revelation 20:11–15 teach not “salvation by works, but judgment based on unimpeachable evidence—evidence that reveals the nature of a person’s relationship with God” (p. 121). Williamson warns against “foregrounding” one side of the tension between salvation by faith and judgment by works.

In Chapter 5, Williamson defends the traditional view of hell as eternal conscious punishment. Williamson sees no problem in the fact that “there is almost nothing that might imply eternal conscious punishment” in the Old Testament (p. 137), since “we would expect the antitype to transcend or be qualitatively different from the type that foreshadows it” (p. 135). He surveys intertestamental literature and the New Testament to argue that eternal conscious torment is the view of the New Testament. Finally, Chapter 6 clarifies the nature of the final state of the righteous and opposes evangelical universalism, which sees hell as a kind of “purgatorial wake-up call” that leads the unrighteous to repent and thereby leave hell (p. 164).

The greatest strengths of this book are its organization, its readability, and its thorough presentation of the Old Testament, intertestamental, and New Testament passages on each question that is discussed. This reviewer would have liked Williamson to address later texts that may reveal trajectories that already existed in New Testament times (e.g., rabbinic literature, the church fathers, New Testament apocrypha). But what Williamson has provided is quite helpful and is therefore recommended as a course textbook on personal eschatology or as personal reading for the individual who wants a systematic presentation of the biblical data. Williamson’s emphasis on progressive revelation is also helpful, and he rightly avoids anachronistic readings of Old Testament passages that some might use to support later Christian theology. At times his exegesis is phenomenal and provides correctives to misinterpretations that are common (e.g. Job 19 or Matt 25:31–46).

The greatest weakness is Williamson’s approach to his “dialogue partners” (pp. 1–2). Williamson gives the impression that he is responding to recent challenges to traditional views, but his interaction with proponents of those views is thin and sometimes unfair. Books can be mentioned as “especially influential” (e.g., p. 34, n. 4) and then never mentioned again. Several of Williamson’s dialogue partners are quoted only when they “concede” a particular point (“concede” is probably an unfair term in several of Williamson’s many uses of the word). Williamson often does not discuss how his opponents interpret a passage differently, giving the impression that his opponents have not addressed the issues he raises. And when he does engage his opponents, he sometimes resorts to ad hominem attacks (e.g., “those who are out on a theological limb,” p. 180); question begging (e.g., in discussing the meaning of αἰώνιος on p. 180); non sequiturs (e.g., proposing that the final fate of the unrighteous would probably be similar to their fate in Hades before judgment day, p. 151); and straw man arguments (e.g., opposing annihilationism simply by noting the presence of “some degree of conscious punishment” in passages that discuss the final state of the wicked, an idea that most annihilationists affirm, p. 151). Perhaps Williamson’s failure to interact deeply with theological opponents is by design. He writes in his introduction, “My primary focus … is not the theological case that proponents of various views can mount, but rather the prior question: What does the Bible say?” The problem is that many of the arguments that Williamson ignores are not theological arguments but biblical arguments.