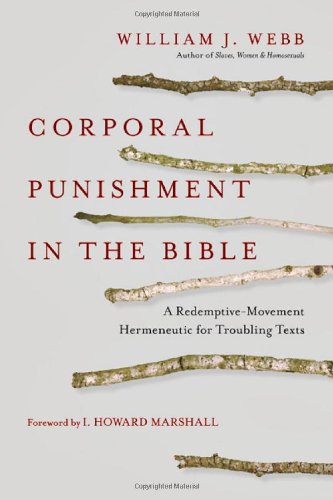 Corporal Punishment in the Bible: A Redemptive-Movement Hermeneutic for Troubling Texts

Professor William Webb, author of Slaves, Women and Homosexuals, has now completed a new book on another controversial topic. In Corporal Punishment in the Bible: A Redemptive-Movement Hermeneutic for Troubling Texts, he juxtaposes the contemporary pro-spanking position with the corporal punishment texts in the Bible, arguing that contemporary advocates of spanking have moved beyond the Bible biblically in their understanding of spanking. In other words, they have unwittingly made a move very similar to Webb’s own trajectory approach by softening the corporal punishment commands. The problem is they have not gone far enough. According to Webb, the consistent position is to eliminate all corporal punishment.

The main critique that has been brought against Webb on this issue is that he does not adequately account for differences in genre within Scripture. This is one of the critiques, for example, in Andreas Köstenberger’s God, Marriage, and Family: Rebuilding the Biblical Foundations (Wheaton: Crossway, 2010), in which Köstenberger responds to a paper Webb presented on this topic. Webb’s book then includes an appendix which interacts with Köstenberger’s critiques.

Walter Kaiser responds similarly in Four Views on Moving beyond the Bible to Theology (Grand Rapids: Zondervan, 2009). In his response to Webb’s chapter, Kaiser writes,

Webb takes a handful of spanking texts from the book of Proverbs but forgets the well-known hermeneutical instructions for interpreting proverbial types of literature. . . . To take a proverb and demand that it is to be understood as a literal word with no exceptions, but universally applicable to all in all situations is to run counter to the literary genre and its own rules of interpretation. . . . However, once again Webb searches the Bible topically (not staying with chair-teaching passages in context) and gathers teachings on all sorts of corporal punishment, from Exodus 21:20–21 (slave passage) to punishments meted out by judges in the courts (Deut. 25:1–3), and lumps them (not to mention apocryphal material from Sirach) all together with proverbial material on raising and disciplining children. This is no way to do Bible study! (pp. 252–53)

In the same book, Daniel Doriani also raises the question of genre: “Had Webb sufficiently accounted for the fact that many of his CP [corporal punishment] texts are civil/penal code, not family law?” Thomas Schreiner, too, in an online review at The Gospel Coalition website of Webb’s latest book, makes a point of how Webb lumps together texts indiscriminately. Schreiner concludes, “It seems to me that the wise application of what we find in Proverbs is well represented by those Webb criticizes: Dobson, Mohler, Wegner, Grudem, and Köstenberger.”

I agree with the critiques given by Köstenberger, Kaiser, Doriani, and Schreiner. I think they put their finger on one of the key weaknesses in Webb’s whole system.This problem is evident particularly in chapter one of Webb’s book where he identifies seven ways “that pro-spankers go beyond the specific teachings about corporal punishment found in the Bible” (p. 28).

Webb deals, first of all, with age limitations. Those today who advocate spanking also recommend guidelines for how and when to administer spankings. This includes suggestions of the age-range of children for whom spankings are appropriate. Webb, however, counters with the observation that the Bible gives no age-limitations for corporal punishment. He also cites verses from Proverbs that speak of corporal punishment for the “fool” and asserts that these could include adults as well as children.

Webb is correct in observing that the Bible does not give us explicit age-limitations for the use of corporal punishment with children. But he is incorrect to suggest that individuals would be disobedient to the instructions of the Bible if they were to limit spankings to certain ages. If we interpret the passages correctly, however, we must acknowledge that the Bible does not teach anything explicitly regarding the specific question of age-limitations. It could be helpful if those who advocate spanking make a distinction here. The use of corporal punishment in the discipline of children is taught in the Bible. But many of the specifics are not explicitly taught. Therefore, recommendations regarding some of the details of spanking are based more generally on the wisdom we glean from the whole of what the Bible says about parenting.

Webb goes too far in the other direction, giving the impression that obeying the clear instructions of Scripture would mean administering harsh beatings to our children all the way into their adulthood. If we are convinced by his portrayal of the biblical landscape on this issue, then it becomes plain that we must somehow “move beyond” what the Bible says. But what do Deut 25:1–3 and Exod 21:20–21 have to do with corporal punishment for children? Very little, in my opinion. And even within Proverbs, we must consider the distinction between disciplining the “fool” and disciplining one’s own child. There may be some overlap between the two, but we are dealing with two very different situations.

The second issue Webb addresses is the number of lashes or strokes. He refers to the pro-spanking position as “two-smacks-max.” In contrast, the Bible sets the limit at forty. “Within a broader theology of corporal punishment the maximum limit on strokes or lashes is clearly set at forty (not two) strokes for Torah infractions (Deut. 25:3)” (p. 34). Again, the comparison is unhelpful and confusing. Deuteronomy 25:3 is dealing with a legal matter among adults in the context of the Mosaic Law. The verses in Proverbs concerning parenting do not give all the specifics for how to exercise corporal punishment.

The arguments are similar in other categories. Webb discusses the “bodily location of the beatings” and “resultant bruises, welts and wounds.” He draws from verses that do not speak directly to the situation of parents disciplining their children, and he concludes that the back (not the buttocks) is the biblical way of administering corporal punishment with children and that the Bible advocates leaving bruises on children.

Webb does raise many fascinating questions with which we must wrestle. I certainly have not addressed them all in this short review. But one should read Webb carefully and critically to discern whether his assertions really hold when he describes what the Bible actually teaches.

Webb’s treatment of the corporal punishment issue seems to be an example of wanting to have one’s cake and eat it too. He desires to embrace the popular values of our time (anti-spanking) while maintaining fidelity to the Bible. There is danger in this hermeneutical system that loosens our foothold in the authority of Scripture.