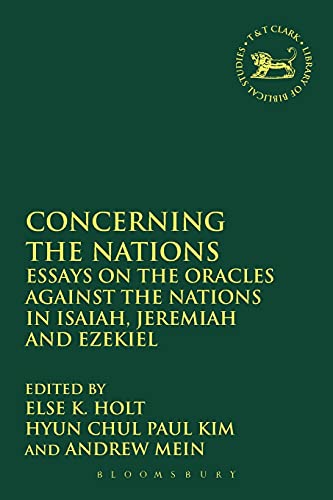 Concerning the Nations: Essays on the Oracles against the Nations in Isaiah, Jeremiah and Ezekiel

The essays in this volume, originating mainly in several Society of Biblical Literature groups, examine the major prophets’ oracles concerning the nations. The volume emphasizes the diversity of this material, but the editors assume that the reader will see its thematic continuity across the books of Isaiah, Jeremiah, and Ezekiel (p. xiv).

In the foreword, Marvin A. Sweeney surveys recent research. Concerning the theological issues raised by YHWH’s use of nations to accomplish his will then and now, he suggests that it is time “to recognize that evil as well as good informs the divine,” and that readers of all religious persuasions should therefore seek to bring about “divine love, justice, and deliverance” (p. xx).

Hyun C. P. Kim sets his study of Isaiah 22 in the context of a ring structure that spans chapters 13–23. Its placement shows that “Judah was also under the impending divine judgment,” and was calculated to shock the original audience (pp. 9–10). Chapters 20–23 portray “a trustworthy YHWH who works through major empires to act against the hubris of the nations” (p. 17).

J. Blake Couey assumes the literary unity and coherence of Isaiah 15:1–16:12 and argues that it evokes “a palpable sense of disaster” without ever actually portraying that disaster (p. 19). Couey presents Jeremiah 48:11 and Isaiah 16:13–14 (ostensibly later) as potential evidence that Isaiah 15:1–16:12 was not fulfilled by the time of Jeremiah on the assumption that the oracle was composed when “a Judahite prophet might have expected an imminent attack against Moab” (p. 31).

J. Todd Hibbard focuses on the textually problematic phrase often translated “city of the sun” in Isaiah 19:18 in the context of the life of Jewish expatriates in Egypt (p. 33). He concludes that the variants in 19:18 arose as part of “the contested evaluation of a Jewish temple established in Egypt by the displaced high priest Onias IV in the middle of the second century B.C.E.” (p. 34). The earliest reading was “city of the sun” (Qumran), followed by the Septuagint (“city of righteousness,” transliterated from Hebrew) and finally by the Masoretic text’s “destroyed city,” an emendation of a scribe who “objected to Onias’ actions” (p. 50).

William A. M. Beuken examines links between descriptions of Babylon’s fall in Isaiah 13–14 and Jeremiah 50–51. Despite perspectival and other differences between the two books’ treatments of Babylon’s destruction, these passages “contain a guarantee that YHWH will take action” against Babylon designed to comfort those suffering at its hands (pp. 70, 72).

Rannfrid Thelle takes up “Babylon as Judah’s Doppelgänger” in Jeremiah. Adopting a synchronic approach, she observes that while the given reasons for it differ, divine punishment is announced against Judah no less than against Babylon and Egypt (pp. 79–88). The contrasting fates of Judah (“return and vindication”) and Babylon (“destruction”) in Jeremiah 50–51 are due to YHWH’s sovereign choice of Israel. Jeremiah contrasts Judah and Babylon primarily on religious and moral grounds (pp. 80–81, 91–94), encouraging a response to YHWH’s restoration.

Carolyn J. Sharp argues that the oracle against Moab in Jeremiah 48, which is “emplotted narratologically in a preexilic setting,” actually addresses the debated question of “boundaries between insiders and outsiders” in Judah after 586 BCE (pp. 97, 99). While “Jeremiah 48 certainly taunts a bona fide enemy” (p. 105), Moab and Judah also have much in common in Jeremiah. The oracle warns Judah against “Moabite” (quotation marks original) “theopolitical complacency and … illegitimate desire for autonomy” (pp. 105, 108), making otherness a primarily religious and moral issue (pp. 107, 108).

Amy Kalmanofsky interprets Jeremiah’s oracles against the nations as “revenge fantasies” that “reflect Israel’s experience of conquest and offer strategies for survival as well as a means of resistance” (p. 110). YHWH’s involvement in these events is motivated in part by his desire to avenge “his wounded masculinity” (p. 120), arising from his inability “to prevent Babylon from conquering Israel” (p. 121). This essay arguably effaces the oracles’ historical and theological facets in favor of an ahistorical, auto-therapeutic endeavor indebted to an artificially gendered representation of YHWH.

Rhiannon Graybill contends that the oracle against Edom (Jer 49:7–22) is defined by “repetition of violence” that is frustrating (because Edom “must be destroyed repeatedly”) and “tedious” (because repetitive, p. 129). On this naïve reading basis she asserts that the oracle produces “counterpleasure” that “refuse[s] gratification and resist[s] teleologies” (p. 129) and that its violence resembles that found in the writings of the Marquis de Sade given their use of “repetition, boredom, and impossible pleasure” (p. 140). This interpretation will be unsatisfying to those with more positive evaluations of the function of repetition and intertextuality in ancient Hebrew prophetic literature.

Hugh Pyper employs a postcolonial hermeneutic for Jeremiah’s oracles, which presents surrender and waiting for deliverance as the “best way to survive” (p. 149). Proposing authorship by an elite deflecting attention “from their own deficiencies” and currying favor with Babylon (pp. 150–51), he finds collusion hidden behind “the message that YHWH is in control” (pp. 156–57). This reading depends on the rather un-Jeremian supposition that YHWH does not exist, or at least had nothing to do with Judah’s fate.

Madhavi Nevander focuses on royal polemic in Ezekiel’s oracles against the nations and argues that the prophet’s cool stance toward Judean and foreign rulers alike elevates YHWH “to royal standing” while undoing human “royal legitimacy” (pp. 162–63). Despite his grandiose claims, Ezekiel 28 presents the king of Tyre as “an asinine buffoon” (p. 167), while Egypt’s pharaoh, responsible for maʿat, is ironically a chaos creature whom YHWH the “victorious king” will dispatch (p. 172). Similarly, the Assyrian “cedar” (31:1–18) “misconstrues its grandeur and is overcome by its pride” (p. 173).

Corrine L. Carvalho’s argues that Ezekiel “uses metaphors that elicit Egyptian religious practices in order to cast Judah’s political interactions onto the cosmic plane” (p. 195). This rhetorical strategy is especially evident in the book’s oracles against the nations (chs. 29–32), where she examines the “crocodile” in Ezekiel 29 and 32 in relation to the image of “the reptilian Pharaoh” (pp. 211–14). She concludes that such comparisons undercut Egyptian claims to power and were intended to help Judah avoid compromising its religious identity under Egyptian influence.

The book’s final essay, by Steed Vernyl Davidson, sees the volume’s essays as a move beyond nineteenth-century German literary and form-criticism (p. 223). He finds that the essays share a desire to make sense of the oracles against the nations “as constituent parts of prophetic literature,” with the theme of integration evident “at the level of the prophetic corpus, ancient Near Eastern geopolitics, and the human condition” (pp. 225–38). Davidson highlights the contemporary relevance of these themes for the interpretation and relevance of the oracles.

Some closing impressions. First, while the volume’s essays do exhibit an integrative aspect, the variety of methods they deploy reveals that there is limited common ground upon which contemporary (mainly North American) interpretations of the prophetic books can agree or evaluate one another. Second, some essays still employ apparently universal laws of human nature, explanations of violence, and so on that seem to derive from an earlier era and lack adequate theoretical grounding and historical nuance. However, the nineteenth century’s strong interest in the historical development of individual pericopae is not carried over in several of the more diachronic essays that refrain from reconstructing a passage’s literary development, and is implicitly rejected by several primarily synchronic essays. Third, those essays that limit prophecy’s horizon to the near-term by means of the interpreter’s reconstruction of the author’s sociopolitical setting, interests, and beliefs often ignore the biblical authors’ essential confidence that YHWH sovereignly controls history. Overall, this collection of diverse essays offers the reader much that is useful and much that will evoke critical methodological and hermeneutical reflection.