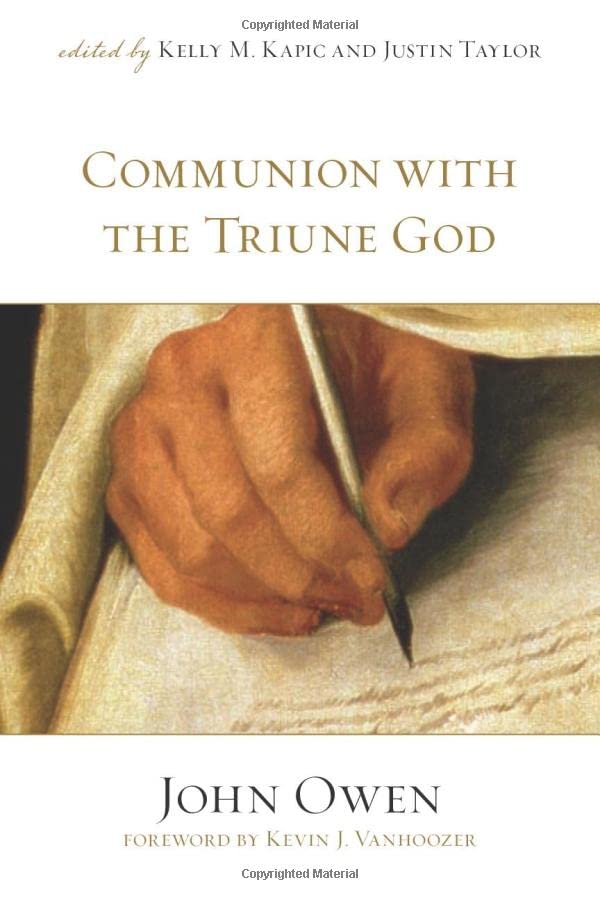 Communion with the Triune God

This book represents a reprint of John Owen’s classic treatise on the Trinity, which was originally published in 1657. This edition, however, is much more than a reprint. It is chock full of extras designed to enhance Owen’s exposition by helping the reader navigate through Owen’s dense content and verbiage. The twenty-seven-page introduction to Owen’s Trinitarian theology is an excellent synthesis of the book. The thirty-page analytical outline is an amazing tool that makes Owen’s flow of thought more readily accessible to the reader, which is no small accomplishment. The four-page glossary makes the transition from seventeenth century to the present day much less painful. It is like having a Puritan dictionary at one’s fingertips, which the reading of Owen requires even more than other Puritan authors. In other words, this edition is remarkable in that the reader has purchased both a classic theological work and a theological tour guide to ensure that Owen’s mind and heart will leave an indelible mark upon the reader’s mind and heart. Furthermore, the remarkable thing about Owen is that he is such a reliable tour guide in his own right who specializes in introducing readers to the Triune God.

Upon learning what makes this edition of Owen’s book so laudatory, one may justifiably want to know what makes Owen’s material so valuable. In other words, in the light of so many books on the Trinity, why bother with John Owen? In a nutshell, Owen’s great accomplishment is that he explains the distinct role of each member of the Trinity so that the reader can have a distinct relationship with each member of the Trinity. Furthermore, understanding the unique work of each person in the Godhead enables the Christian to give each person a distinct praise for that work. Owen calls to the reader to press onward and upward in order to plant his feet on higher ground where he will experience a deeper relationship with God and enjoy the exquisite pleasures to be found as the reader sees and treasures more of his beauty and majesty. Many rightly read the book as a theological treatise, but too few find it to be a manual for worship.

A few snippets will usefully demonstrate Owen’s masterful weaving of theology and doxology. Owen shows that lost humanity rests under the wrath of God. However, one must remember that it is the love of God that saves humanity from the wrath of God. Owen brings many Scriptures to the attention of the reader that highlight God the Father’s love (Exod 34:6–7; 1 John 4:8; John 3:16; Rom 9:11–12; Eph 1:4–5; 2 Thess 2:13–14, etc.). This love is most clearly revealed in the Father’s sending of His own Son.

Christians walk oftentimes with exceedingly troubled hearts, concerning the thoughts of the Father toward them. They are well persuaded of the Lord Christ and his goodwill; the difficulty lies in what is their acceptance with the Father—what is his heart toward them? “Show us the Father, and it suffices us” (John 14:8). Now, this ought to be so far away, that his love ought to be looked on as the fountain from whence all other sweetnesses flow. (p. 110)

Furthermore, Owen clears up some common misconceptions about Jesus the Son. Some in the church today act as though they were only dating Jesus. Some act as though they need to impress Jesus and keep him interested in them by Christian obedience. This approach causes Christians to remain unsure of his eternal commitment to us. Christians are married to Christ; they are not dating him. Owen shows that Christ binds himself to us as an all-sufficient Savior and mediator who has purchased our redemption and thus never divorces his bride.

This is the first thing on the part of Christ—the free donation and bestowing of himself upon us to be our Christ, our Beloved, as to all the ends and purposes of love, mercy, grace, and glory; whereunto in his mediation he is designed, in a marriage covenant never to be broken. This is the sum of what is intended: The Lord Jesus Christ, fitted and prepared, by the accomplishment and furniture of his person as mediator, and the large purchase of grace and glory which he has made, to be a husband to his saints, his church, tenders himself in the promises of the gospel to them in all his desirableness; convinces them of his goodwill toward them, and his all-sufficiency for a supply of their wants; and upon their consent to accept of him—which is all he requires or expects at their hands—he engages himself in a marriage covenant to be theirs forever. (p. 156)

Kelly M. Kapic describes the essential difference in Owen’s thought between union and communion. Union with God is a unilateral and receptive. Union is a sovereign work of God in which the believer is receptive as an object of God’s grace. Communion with God is mutual and responsive as the believer responds to God’s grace in relationship with Him. Kapic unpacks the practical implications of this distinction:

While union with Christ is something that does not ebb and flow, one’s experience of communion with Christ can fluctuate. This is an important theological and experiential distinction, for it protects the biblical truth that we are saved by radical and free divine grace. Furthermore, this distinction also protects the biblical truth that the children of God have a relationship with their Lord, and that there are things they can do that either help or hinder it. When a believer grows comfortable with sin (whether sins of commission or sins of omission) this invariably affects the level of intimacy this person feels with God. It is not that the Father’s love grows and diminishes for his children in accordance with their actions, for his love is unflinching. It is not that God turns from us, but that we run from him. Sin tends to isolate the believer, making him feel distant from God. Then come the accusations—both from Satan and self—which can make the believer worry that he is under God’s wrath. In truth, however, saints stand not under wrath but in the safe shadow of the cross, (p. 21)

Let the saints learn to act faith distinctly on the Holy Ghost, as the immediate efficient cause of all the good things mentioned—faith, I say, to believe in him; and faith in all things to believe him and to yield obedience to him; faith, not imagination. The distinction of the persons in the Trinity is not to be fancied, but believed. So, then, the Scripture so fully, frequently, clearly, distinctly ascribing the things we have been speaking of to the immediate efficiency of the Holy Ghost, faith closes with him in the truth revealed, and peculiarly regards him, worships him, serves him, waits for him, prays to him, praises him—all these things, I say, the saints do in faith. The person of the Holy Ghost, revealing itself in these operations and effects, is the peculiar object of our worship. (p. 421)

Owen also gives practical guidance for recognizing the acts of the Spirit that we may adore Him for each distinct act:

Let us, then, lay weight on every effect of the Holy Ghost in any of the particulars before mentioned, on this account, that they are acts of his love and power toward us. This faith will do, that takes notice of his kindness in all things. Frequently he performs, in sundry particulars, the office of a comforter toward us, and we are not thoroughly comforted—we take no notice at all of what he does. Then is he grieved. Of those who do receive and own the consolation he tenders and administers, how few are there that consider him as the comforter, and rejoice in him as they ought! Upon every work of consolation that the believer receives, this ought his faith to resolve upon—“This is from the Holy Ghost; he is the Comforter, the God of all consolation; I know there is no joy, peace, hope, nor comfort, but what he works, gives, and bestows; and that he might give me this consolation, he has willingly condescended to this office of a comforter, (p. 422)

In a nutshell, then, I heartily recommend this new edition of Owen’s work on two fronts. First, Owen’s book itself is an absolute masterpiece of theology proper. No work on the doctrine of God gives the reader so much light matched with so much heat. Second, Kapic and Taylor have made this masterpiece more useful and accessible for future generations. John Owen is a gift to the church and the editors have ensured that this gift will be one that keeps on giving.