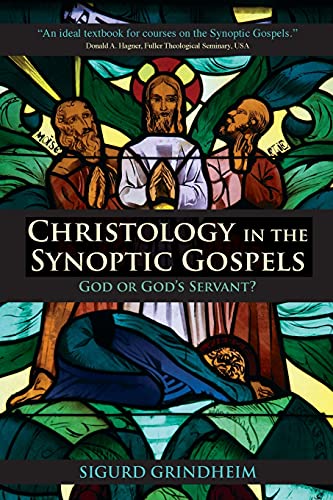 Christology in the Synoptic Gospels: God or God’s Servant?

Sigurd Grindheim’s new book, Christology in the Synoptic Gospels: God or God’s Servant?, is neither focused on the historical Jesus nor the understanding of Jesus within the entire NT. Instead, the book’s modest yet weighty goal is “to explain what the first three canonical Gospels teach us about who Jesus is” (p. xiii). The result is a helpful introductory work on Christology. The book is divided into four chapters, and terminology that might be new or unclear to the reader is set in bold and helpfully defined in a lengthy appendix. One of the strengths of the book is its readability, especially considering the breadth of material covered throughout the book.

After a brief introduction, Grindheim begins his exploration of Synoptic Christology with a chapter on “Israel’s Eschatological Expectations.” Here Grindheim explains the “different Jewish hopes regarding the end-time saviors they believed that God would send” (p. 1). The diversity of material in the OT and Second Temple Judaism is organized under five main headings: Messiah, Angel of the Lord, Son of Man, Servant of the Lord, and Wisdom of God. The bulk of the chapter deals with the varied portrait of the Messiah, in particular as a royal, Davidic figure in, for example, 2 Sam 7, the so-called messianic psalms, and Psalms of Solomon 17. Grindheim also deals extensively with Dan 7 because of its royal and “Son of Man” connections to Jewish messianism. This preparatory chapter proves to be the foundation upon which Grindheim places his subsequent christological analysis in the Synoptic Gospels.

The remaining three chapters of Christology in the Synoptic Gospels address specific aspects of the christological portraits of Mark, Matthew, and Luke. For Grindheim, the Synoptic Gospels demonstrate strong interaction with earlier Jewish traditions, but they also “show that Jesus fills an even bigger role: that of God himself” (p. 35). The christological footprint in the Gospel of Mark appears to be focused on revealing Jesus in the role of God and as God’s servant. The former is demonstrated from the clear statement at the incipiency of the Gospel: “the beginning of the good news of Jesus Christ” (Mark 1:1). Grindheim argues that instead of the “good news” of God, Mark has placed Jesus in the role of God. Jesus’s teaching with authority, healings, and the “theophany on the Sea of Galilee” (p. 47) likewise identify Jesus as “the coming of God to earth” (p. 75). The second half of the chapter focuses on Jesus as God’s servant, in particular as “Son of God,” which is “the most important title for Jesus in the Gospel of Mark” (p. 60). Ultimately, Mark’s Gospel displays a combined portrait of Jesus as suffering Messiah and divine, authoritative Son of God.

In the Gospel of Matthew, the infancy narrative reveals two key names for Jesus: “Jesus” (Yahweh saves) and “Emmanuel” (God is with us). For Grindheim, both of these names identify Jesus with God (p. 81). It is Jesus who saves, and it is Jesus who is now God with Israel. Matthew’s theme of Jesus as God’s presence is seen throughout the Gospel, especially at its conclusion where Jesus proclaims to his disciples his presence with them “to the end of the age” (Matt 28:20). Matthew also identifies Jesus with the God of Israel through the attribution of worship to Jesus (pp. 96–98). Jesus as God’s servant is equally important to Matthew, especially as the messianic “son of David” and the “eschatological shepherd” mentioned in the prophetic works of Micah, Ezekiel, and Jeremiah (pp. 101–2). Finally, Matthew includes Jesus’s own explanation of his relationship to the Father in 11:25–30, a sonship that is “redefined through the use of wisdom ideas” (p. 110).

In chapter four, Grindheim claims that the title of Lord is far more prominent in Luke’s Gospel than in the other Synoptics (pp. 118–119). Grindheim notes that Luke as narrator is concerned especially with naming Jesus as Lord, to the point that “Jesus and God share the same name” (p. 119). Jesus is depicted as both God’s agent and in the role of God on earth, particularly in the act of salvation. Simeon’s proclamation that he “has seen God’s salvation when he has seen the baby Jesus (2.30)” demonstrates that “Jesus is not merely an agent of salvation” but the one through whom salvation comes (p. 129). Grindheim also argues that salvation and faith in Jesus are tied more closely together in Luke, a combination typically reserved for Yahweh in the OT (pp. 129–30). Like the other Gospels, however, Jesus is also pictured as God’s servant. According to Grindheim, the “prophetic aspects of Jesus’ ministry receive much more attention in Luke’s Gospel” (p. 132), especially in his public ministry as seen in his speech at Nazareth (Luke 4:14–30) and in comparisons with Elijah, Elisha, and Moses. However, Jesus is greater than a prophet because he is the one who empowers and sends out his disciples as prophets into the world (p. 135).

One of the greatest shortcomings in Christology and the Synoptic Gospels is that the introduction and conclusion are incredibly brief and oversimplified. This brevity leaves one wishing for a deeper explanation of the author’s methodology as well as further instruction about how this book differs from previous approaches to christological studies. The lack of methodological explanation ultimately raises a number of questions as one reads the book. For example, how does the relationship between the NT and Second Temple Judaism impact one’s understanding of the Christology of the NT? Also, since Grindheim virtually foregoes the Greco-Roman setting of the Synoptics, is the only context for understanding the Synoptic authors’ christological portrayal of Jesus a Jewish one? Considering the modest length of the book there is certainly room for expansion and clarification regarding these vitally important issues.

Overall, Christology in the Synoptic Gospels is a valuable primer to the theological import of the person and work of Jesus Christ. Grindheim provides a welcome resource for anyone interested in delving deeper into the difficult waters of NT Christology.