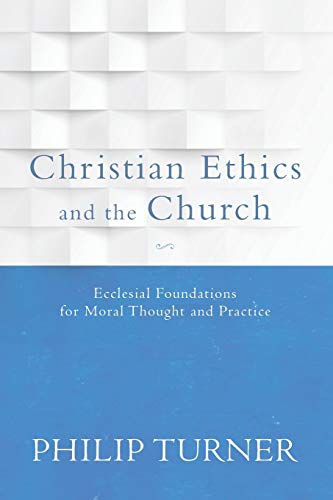 Christian Ethics and the Church: Ecclesial Foundations for Moral Thought and Practice

While many texts in the discipline of ethics focus on issues or individual responsibility, Philip Turner offers a different approach in Christian Ethics and the Church. As the title implies, this work focuses on the ecclesial community as the foundation for understanding ethics. In fact, Turner rarely deals with issues that are prevalent in our culture; instead, he wants his readers to focus on how they think and live within the community of the church.

Before embarking on his quest to build a church-based ethic, Turner offers three historical perspectives on the focus of Christian ethics. Each of the first three chapters is devoted to a particular thinker: John Cassian, Walter Rauschenbusch, and John Howard Yoder. Each of these offers an approach to the ethical life from a different perspective. Cassian, the late fourth, early fifth century monastic writer offers a focus on “the life of the soul.” Rauschenbusch, the early twentieth century proponent of the social gospel, proposes to focus on “the life of society.” Finally, Turner summarizes and ultimately adopts “the life of the church” focus of Yoder, the twentieth century Mennonite scholar (p. xvii).

The main contribution of the book comes from part two in which Turner expounds upon the ethical implications for life together in Christ found in Paul’s letter to the Ephesians. Over the course of these two chapters, he sets up the biblical case for a life in the community of the church as the foundation for ethics. Turner notes, “A close reading of the relevant New Testament texts establishes that the focus is properly the common life of the church rather than the sanctification of individuals or the redemption and reform of a corrupt social order” (p. 61).

The third part of the book offers a look at two possible exceptions to the paradigm Turner proposes. These exceptions are the self and the society. In the chapter on self, he contrasts his interpretation of Ephesians with the first seven chapters of Matthew. In due course, he suggests that Matthew does focus on the individual’s path to holiness but that the Gospel writer “locates the royal way within the life of a people that has a particular calling under God” (p. 124). In the chapter on society, Turner uses Luke’s Gospel to draw out the question of the role of a Christian in society. While he concludes that Luke focuses more on Christ’s final rule over all creation, this chapter sets up further discussion regarding the ecclesial life in civil and political society.

Turner explores the practical applications of his work in the final part of the book. This is not a discussion of particular issues in ethics, but it is a way of looking at the ecclesial life in several different contexts. The goal of this ecclesial life is “to provide a manner of life that unites what is right to do with what is good to do” (p. 155).

The most interesting application of the ethical life that Turner explores is Christian interaction with society. The author adopts an Augustinian, two cities approach to public life whereby Christians find themselves as citizens of both an earthly city and a heavenly city. Their allegiance is primarily to the heavenly city. Departing from Yoder, however, Turner considers the proper place for Christian engagement with the political process and government. He even suggests that some Christians may rightfully find their vocation in politics.

The last note of interest is that Turner on multiple occasions applies his ethic to marriage. Marriage “serves . . . as a form of corporate witness through which Christian belief and practice are made socially visible. No social institution provides a better view of the assumptions of a society than that of marriage” (pp. 211–12). Turner goes on to condemn the contemporary church’s view of marriage as being conformed to the world. He concludes,

The possibility of a social witness on the part of the Western churches that express a faithful form of belief and practice in respect to marriage is tied to their ability to provide an alternative to the current beliefs and practices of the larger society of which they are a part. It is hard to escape the conclusion that at present their energies are directed to adapting to that culture rather than providing an alternative to it. (p. 214)

Turner’s work is a welcome focus on the communal aspect of the Christian. He does not succumb to the temptation of some who delve into a community-based system of ethics to derive truth from community. His source of truth is clearly the text of Scripture. Even though he admittedly does not explore the Old Testament contributions to ethics, his New Testament ecclesial foundation for ethics is an interesting perspective that deserves consideration. This book serves as a great reminder of why the church is central to the life of the Christian and how it can function in the development of ethics.