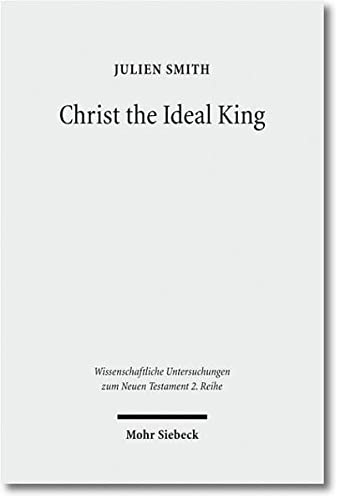 Despite Paul’s frequent identification of Jesus as Israel’s Χρίστος, there have been few attempts to situate Paul’s epistles within the context of ancient kingship discourse. Smith remedies this lack by examining Paul’s epistle to the Ephesians wherein “Christ is characterized as a type of ideal king” who unifies “the fractured cosmos” and “establishes on earth the harmony that is understood to exist in the cosmos” (p. 3). Paul’s depiction of Christ as ideal king is the glue that holds together most of the epistle’s themes.

Smith suggests that in interpreting Ephesians it is wise to consider the epistle against the context of literary works that the author would have assumed his audience to know. Thus, the bulk of the book is devoted to establishing “The Ideal King in Greco-Roman Thought” (pp. 19–89) and “The Ideal King in Jewish Thought” (pp. 90–173) as the comparative material against which Ephesians can be examined. Within Greco-Roman literature, the ideal king is often portrayed as the vicegerent of the gods who rules on their behalf and establishes heavenly concord on earth. In this regard, the king is closely connected with the gods if not necessarily always understood as divine. The king is often portrayed as an embodied “living law” who possesses law within himself. The ideal king is a philosopher who rules with virtue and is thereby able to inculcate virtue within his own subjects. Further, the ideal king is society’s premier benefactor who, when ruling rightly, bestows gifts upon his subjects. With respect to Jewish literature, due to space restrictions Smith does not examine kingship ideology within the OT but limits his study to Second Temple texts. While there is much diversity within these sources, one can easily find common features of the ideal king, and many of these features overlap with the Greco-Roman writings. For example, the king reflects God’s glory as he rules as his vicegerent. Likewise, the king rules with virtue, with justice and righteousness, and in accordance with the law. The patriarchs, depicted by Philo as rulers, are living laws who lead the people in virtue. Often the king is spoken of as ruling with wisdom due to God’s Spirit residing upon him. The king imitates God and thereby bestows gifts upon his people, rules with kindness, and transmits divine glory to the people. Finally, the ideal king defeats the hostile enemies of God’s people and thereby ushers in a golden age of peace.

These texts, then, function as the backdrop or “cultural repertoire” (p. 18) against which Paul’s kingship Christology can best be understood. Thus, within Ephesians, Paul consistently speaks of “Christ” as the agent through whom God acts to accomplish his purposes. Whether, then, grammatical arguments can determine if Χρίστος is a proper name or royal title is largely a moot point, for the consistent description of Christ as God’s chosen agent functions to portray him as God’s royal vicegerent who rules on God’s behalf. Smith discerns five further aspects of Paul’s depiction of Christ in Ephesians that portray Christ as an ideal king. (1) Paul’s articulation of the Messiah who effects reconciliation between humanity and God and between Jew and Gentile (Eph 2:1–22) coheres nicely with the articulation of the ideal king as the agent of the god(s) who produces the harmony on earth that was thought to exist in the heavens. The peace that the Messiah produces (2:17) resonates with the notion that the ideal king’s rule would be marked by a golden age of peace. (2) Paul’s Christ is the supreme benefactor who bestows gifts upon his subjects (4:1–16; cf. 1:3). (3) Paul’s ethical exhortations and specifically his statement “you did not thus learn the Christ” (4:20; cf. 4:17–5:21) are “illumined when set in the context of the way in which the ideal king was thought to enable the inculcation of virtue in his subjects” (p. 228). The ideal king is the philosopher-king who embodies divine wisdom and virtue and is able to transmit this to those ruled. Thus, the “two ways” tradition and the exhortations to abolish vice make sense as articulations of the appropriate behavior for those who submit to the Christ’s reign. (4) Smith suggests the household code (5:22–6:9) “functions to demonstrate the extent of Christ’s reconciling rule. As in the church, so in the household, the reign of Christ brings harmony” (p. 236). Within the code, the Messiah is the model “for the sort of behavior that promotes harmony within the household” (p. 237). (5) Smith notes that the epistle concludes by portraying not the Messiah, but the church as God’s corporate warrior who defeats the enemies of God (6:10–20). Paul presents the church as participating in the Messiah’s peaceful rule, a rule in which the evil powers have already been conquered.

Smith concludes by suggesting that the chief benefit of his study of Paul’s kingship discourse is that “it enables us to understand the integral connection between the letter’s attempt to form the identity and behavior of its readers” (p. 246). The ideal king, the Messiah, who has reconciled, liberated, and bestowed divine gifts upon the people is the very king who effects their moral transformation through his rule.

Smith’s argument is almost entirely persuasive and helpfully illuminates the sources of Paul’s christological rhetoric in Ephesians. It is surprising that there are not more full-length studies devoted to the ways in which kingship-discourse may have influenced Paul’s writings. My primary concern with the book, however, is how the cultural repertoire almost overwhelms Ephesians, as only about 80 pages are devoted to Paul’s epistle. Methodologically, this can have the effect of not only marginalizing what should be foregrounded, but also of forcing Paul’s christological language into a predetermined framework. One further criticism is that given Paul’s direct citation of the Psalms it would be have been wise to have included a discussion of how some OT writings contributed to Paul’s kingship language. Nevertheless, this is an excellent and thought-provoking book.