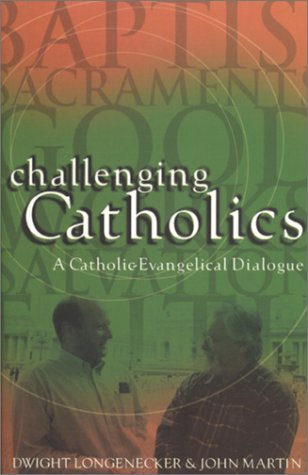 Of these four books three were published in the United States of America and one in England. This no doubt reflects the fact that Evangelical-Catholic dialogue is more widespread and more public there that it is in the British Isles. I have listed the four in ascending order of demand upon the reader.

The first book is by two laymen, although Longenecker, now a Roman Catholic, was an Anglican priest for ten years. Martin, born in Australia, is a former editor of the Church of England Newspaper. Both were reared in Christian homes of a devout pietistic type, the first in the States and the second in Australia. In the introduction they swap notes about their upbringing, describing its benefits and its deficiencies (though in a kindly spirit). They then recount their spiritual pilgrimage, the one ending in reception into the Catholic Church, the other in Anglicanism. For longenecker, ‘Every good thing from my evangelical home, and all the good things within Anglicanism are fulfilled and completed in the Catholic Church’ (p. xxvi).

Each chapter of the book is in the form of a dialogue about a specific topic such as the place of the Bible, the status of Mary, the papacy and so on. Strangely in the chapter ‘Brother are you saved?’ there is no getting to grips with the doctrine of justification by faith, which Luther termed the article of standing church. Does this failure reflect something missing in much of today’s Evangelicalism?

My impression of the dialogue overall is that the honours go to Longenecker. Martin seems at places not to be engaging with some of the points raised. This is particularly so in the chapter on apostolic authority. So despite the book’s title Protestants rather than Catholics may be challenged!

The second book begins with two chapters that review the present state of Catholic/Evangelical relations. As one would expect it is chiefly the United States that is in view, although the last chapter of the book by the evangelical Protestant David E. Bjork describes his evangelistic ministry within the Catholic Church in France. Two chapters were of particular interest to me—those by Gerald Bray and Timothy George. The former writes on Evangelicals, Salvation, and Church History and the latter on Towards an Evangelical Ecclesiology. Bray argues that despite significant differences among them Evangelicals do have a distinct identity in their emphasis on a personal experience of salvation ‘along with the assurance of going to heaven immediately after death’ (79). He makes the interesting point that evangelicalism has always been a parachurch movement, which is perhaps why its adherents tend to have a weak doctrine of the church. It is this deficiency that George addresses in his chapter. Acknowledging that ‘evangelicalism has not made reflective ecclesiology a high priority’ (122) he then gives a fine exposition of the church as one, holy, catholic and apostolic. Avery Dulles argues that these four classical attributes of the church may well help to bring about a rapprochement between Catholicism and Evangelicalism (117). ‘Since both sides affirm the same four attributes, the convergence is significant and encouraging.’ However, he expresses a measure of caution when he adds:

But because the two sides operate on different ecclesiological models—predominance being given to the herald model and the community of disciples on the Evangelical side and to the sacramental model on the Catholic side—full agreement is elusive.

In the first chapter, ‘An Evangelical Reflection on Scripture and Tradition’ George subjects both the tradition of tradition of traditionless evangelicalism (as he terms it) and recent Catholic teaching on the subject to critical scrutiny. In so emphasising personal conversion many evangelicals have tended to disparage the Christian tradition. What they need to do is to ‘develop an authentic spirituality drawn from the riches of the whole Christian Tradition’ (12). Official Catholic teaching, on the other hand, elevates tradition on the level of Scripture. Vatican Two declared in the second chapter of Dei Verbum that ‘both sacred tradition Scripture and sacred Scripture are to be accepted and venerated with the same sense of loyalty and reverence’ (DV, 9). For an evangelical to accept this would lead him or her to become either Orthodox or a Roman Catholic.

Avery Dulles also draws upon Dei Verbum and the writings of contemporary theologians to show ‘how the unity of Scripture and tradition is secured by their common basis in revelation’ (35). After reviewing various formulations of the relationship between Scripture and tradition he concludes that ‘Today as in the past, the Catholic Church views tradition as an indispensable vehicle for the transmission of revelation. While revering Scripture as containing the word of God in unalterable form, he denies that Scripture is sufficient in the sense that the whole of revelation could be known without tradition. Most Catholic theologians today would hold that every revealed truth is in some way attested by Scripture, but that some revealed truths are not explicitly mentioned by any texts of Scripture’ (57). Here is a roadblock that there is no way round. As Timothy George observes ‘Evangelicals can affirm the coinherence of sacred Scripture and sacred Tradition, but not their coequality’ (34).

J. I. Packer contributes a helpful chapter on use of the Bible among evangelicals, which is followed by an essay by Thomas G. Guarino on “Catholic Reflections on Discerning the Truth of Sacred Scripture”. He concludes, somewhat optimistically to my mind, that Catholics and Evangelicals ‘can agree on a role for the principle of sola scriptura, on a role for the principle of tradition, and on some place for a legitimate understanding of development’ (101). John Woodbridge follows with along chapter on the role of tradition in the life and thought of twentieth-century evangelicals. The last chapter on reading Scripture in the Catholic tradition is by Francis Martin.

All in all this book justified the claim made on the back cover that ‘while not claiming to resolve all the differences that exist, this volume does go a long way toward recasting this old dispute in a new and promising light’.

Knowing the Triune God is a series of high-powered essays on various aspects of the work of the Spirit in the practices of the church. Subjects covered range from the church, the Bible, the liturgy as sources of knowing the Trinity; contemplation, baptism and interpretation as means of formation in knowing the Trinity; to disputed questions on knowing the Trinity. Evangelicals especially need to heed this book for much of their theology and practice hardly seems to recognise the existence of the ever-blessed Trinity.

What are my reflections on reading these four books? They are two in particular. First, how little justification figures in the discussions that they contain. Yet justification is at the heart of the gospel as the apostle Paul passionately proclaims in Galatians. It is the article of a standing or falling church (Luther). Why is it no longer centre stage in evangelicalism today?

Secondly, the key issue that underlies all other issues is passed over. Rome regards the church as the extension of the incarnation—as Christ prolonged in time and space. Though its individual members may sin and err the church collectively cannot do so. As the Waldensian theologian Vittorio Subillia showed years ago such a view of the church means that reformation becomes impossible. A church that cannot err cannot reform. This is the key issue that urgently needs to be addressed.