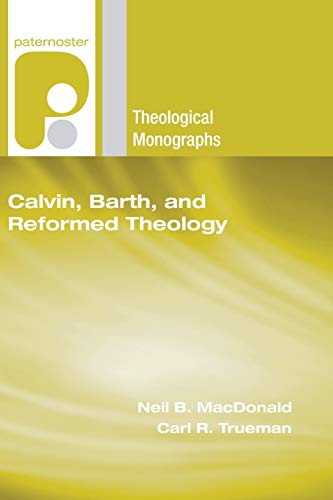 Whose theology offers a better guide to the ongoing work of Reformed theology-that of Calvin or of Barth? It is this basic question that the collection of essays in this book seeks to answer. Seven essays total are divided across four main parts: (1) Historical Overview; (2) The Sacraments of Baptism and Eucharist; (3) Atonement; and (4) Scripture. The Historical Overview comprises the opening chapter and should be read first, but after that the order of reading is not critical as each of the subsequent parts is topically self-contained.

Carl Trueman starts things off, providing “a broad background to Reformed theology in both its original early modern context and in its appropriation in the writings of Karl Barth” (p. 3). Critical in Trueman's narrative is that in Calvin's context the confessions of the Reformed churches functioned as ecclesiastical consensus documents by which the benchmark of Reformed theology was established. Calvin's theology thus functions only as a de facto benchmark of Reformed orthodoxy in that it so well reflects these early confessions. Weighing in on the question in hand, Trueman thinks that Barth's theology stands materially in more discontinuity than continuity with the Reformed confessions.

The first of two chapters comprising Part 2 compares Calvin and Barth on the Lord's Supper (Trevor Hart); the second compares them on baptism (Anthony Cross). Hart helpfully sets up his discussion reviewing the questions that were/are central to historical discussions about the Eucharist. On Calvin's view, Hart highlights the sacramental nature of the Lord's Supper-a dual dynamic in the sign of the Supper in which from the human side we participate by faith and from the divine side God draws us to himself in communion with Christ through the working of his Holy Spirit. Since Barth never completed his volume on the doctrine of the Lord's Supper, Hart extrapolates in fair measure from Barth's more developed views on baptism. From this Hart argues that Barth rejected the Supper being a “sacrament” and saw it primarily as a single movement of human activity directed towards God in faith and obedience. Following this, Anthony Cross adeptly covers a lot of ground in his comparative analysis on baptism. For Calvin, the sacramental nature of baptism “is the initiatory sign by which we are admitted to the fellowship of the Church, that being ingrafted into Christ we may be accounted children of God” (p. 65). As such water baptism is integrally linked to Spirit-baptism. Cross contrasts this with Barth, who rejects the sacramental nature of baptism, seeing it instead as “a free and responsible human act” (p. 70). The major weakness of Barth's view, according to Cross, is the radical distinction he makes between Spirit- and water-baptism.

Part 3 likewise comprises two chapters. The first exposits Barth's doctrine of substitutionary atonement (Neil MacDonald); the second deals with the doctrine of atonement by way of the doctrine of election that underpins it (Myron Penner). MacDonald presents Barth's view of substitutionary atonement as founded primarily on the narrative of the synoptic Gospels. It follows along these lines: Jesus' mission entailed declaring God's final judgment on Israel and the world. Pilate's judgment on Jesus, leading ultimately to the cross, was actually YHWH's own judgment on Jesus. The passion story is thus Jesus undergoing YHWH's judgment in place of Israel and the world-“same judgment, different object of judgment equals substitutionary atonement” (p. 109). By MacDonald's lights, Barth's interpretation represents a triumph of dialectic and imagination and “is preferable to Calvin's view of atonement principally because the narrative historicity it presupposes is rational to affirm by the standards of the Enlightenment” (p. 115). Following this, Myron Penner ably lays out Calvin's theology of atonement, describing it as a thoroughly Reformed and scripturally faithful account; he then evaluates how compatible Barth's account is with it. As Penner explains, Calvin's atonement theology centers on the two-natures theology of Christ, being thus rooted with God in eternity. Barth's atonement theology, on the other hand, begins with the actual person of Jesus Christ in the incarnation-“what is sometimes called Barth's actualism” (p. 137). The issue of divine election and reprobation figure significantly in the discussion. In the net analysis, Penner concludes, Barth's view is not compatible with Calvin's and is thus not recommendable.

Rounding things off for Part 4, Stephen Holmes lays out in brief measure Calvin's view of Scripture. Simply put, Holmes presents why Calvin believed that the Bible should be believed. At base the answer has to do with the workings of the Spirit in the human heart. Lastly, Craig Bartholomew discusses theological interpretation of Scripture as relates to Calvin and Barth. Boiling it down, Calvin and Barth represent the type of biblical interpretation that we need to appropriate for our day.

Two such luminaries as Calvin and Barth can be compared in only the most modest terms in a single assortment of essays as we have on offer in this book. Nevertheless, with the exception of Holmes' fine inclusion, which focuses solely on Calvin, these essays contribute an insightful “compare and contrast” on three main loci of theology. Do these essays give the answer as to whose theology offers a better guide to the ongoing work of Reformed theology? The majority consensus here seem to share Trueman's opinion, though it is hardly dispositive. What is missing in my opinion and would have completed this work most fittingly is an epilogue that offered a summary evaluation of these essays in light of this prime question presented at the start.