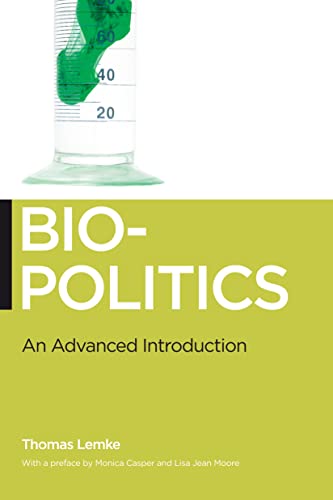 Biopolitics is not easy to define. In Biopolitics: An Advanced Introduction, German sociologist Thomas Lemke does not back away from this fact but instead seeks to provide a historical narrative outlining the contours and development of the term and its use. In fact, the term has been used in conflicting and contradictory ways, so a standard definition is unhelpful because it would likely distort this history. At root it “denotes a politics that deals with life” (p. 2). “Biopolitics may refer to issues as diverse as financial support for agricultural products, promotion of medical research, legal regulations on abortion, and advance directives of patients specifying their preferences concerning life-prolonging measures” (p. 1). So for our purposes it is helpful to note that biopolitics is at the very least an interdisciplinary notion that brings questions from fields like bioethics into conversation with political concerns and realities.

Lemke begins by noting two early approaches to biopolitics. Naturalistic concepts of biopolitics take life as the basis for politics. In this view, politics must orient itself “toward biological laws” and take them “as a guideline” (p. 10). Examples from this approach demonstrate biopolitics's checkered history: racism and Nazism both connect to this. Politicist concepts, on the other hand, conceive of life processes as the object of politics. For example, ecological regulation would fall into this trend, as would technological progress for the sake of “fixing” biological “problems.” Lemke's central thesis is that both of these approaches fail because they both assume one stable pole: either life defines politics or politics life (p. 4). Since there is in fact instability, Lemke turns to the thought of Michel Foucault, who first developed a more balanced notion of biopolitics:

In contrast to the former conception of biopolitics, Foucault describes biopolitics as an explicit rupture with the attempt to trace political processes and structures back to biological determinants. By contrast, he analyzes the historical process by which “life” emerges as the center of politics strategies . . . . From this perspective, biopolitics denotes a specific modern form of exercising power. (p. 33)

The rest of the book essentially follows thinkers inheriting and modifying Foucault's thought. Giorgio Agamben focuses on the concept of homo sacer, which was a figure in Roman law. “This is a person whom one could kill with impunity, since he was banned from the politico-legal community and reduced to the status of his physical existence” (pp. 54-55). Agamben sees this concept of “bare life” in asylum seekers, refugees, the brain dead, and other vulnerable persons. Thus biopolitics becomes a way of dealing with these types of people. Lemke also covers the thought of Michael Hardt, Antonio Negri, Agnes Heller, Ferenc Fehér, Didier Fassin, Paul Rabinow, and many others. In this exploration he brings many other topics into conversation with biopolitics as he seeks to chart the development in the various thinkers. Lemke concludes the book with a brief constructive chapter in which he tries to describe the biopolitics mode of functioning rather than its causes or effects (p. 118). He concludes by contrasting biopolitics with bioethics. Bioethics, in his view, focuses on the question, what is to be done? “An analytics of biopolitics, on the other hand, seeks to generate problems. It is interested in questions that have not yet been asked . . . . As a result, an analytics of biopolitics has a speculative and experimental dimension: it does not affirm what is but anticipates what could be different” (p. 123).

Because of the varied interpretations and explorations of biopolitics and Lemke's explicit desire for it to be interdisciplinary, theological perspectives are necessary though not explored in any depth in this book. Christian bioethics would benefit from exploring some of the questions that biopolitics raises because biopolitics deals with many similar concerns from different angles. While still addressing issues of the dignity of human life, bioethics can explore connections to this theme such as economic concerns and issues of power and exploitation in research and development.

Biopolitics should be of wider interest to evangelical theology as well. Some of Lemke's most interesting examples of problems come from poor countries where persons are being exploited and used, where their lives are disposable. Missions agencies and missionaries must be aware of this reality and the opportunities it opens up for ministry and witness. In addition, doctrines such as the incarnation and practices such as the Lord's Supper provide resources for addressing the connection between life, politics, and power. While this particular book is most likely of interest to graduate students studying bioethics, political theology, or other related specialties due to its focus on the historical development of the idea, biopolitics in general invites continued engagement from evangelical theologians.

Jacob Shatzer is assistant professor of theological studies and associate dean of the School of Theology and Missions at Union University in Jackson, Tennessee, USA.