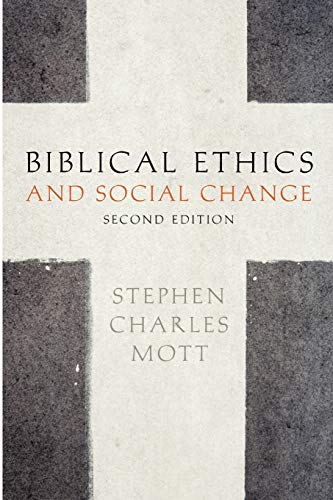 In a world that is constantly faced with questions about tensions in the Middle East, rising warlords in Africa, and various awareness campaigns like KONY 2012, evangelicals have wrestled with the role of Christians and the church in responding to such crises. Stephen Charles Mott’s Biblical Ethics and Social Change shows that some of the evangelical answers center on the balance of faith and justice. The current trend of conservative publishing also bears the mark of this struggle, with many recent books discussing care for the poor, the mission of the church, and Christian place in public dialogue.

Mott, former Professor of Christian Ethics at Gordon-Conwell Theological Seminary, has updated his 1982 book to provide current social illustrations and to incorporate research done over the past thirty years since the book’s first edition. The book’s title correctly answers any questions about the book’s content and goal. Mott holds that the Bible in its entirety provides more than sufficient warrant for Christian concern and action for the alleviation of social injustice. For Mott, the heart of biblical thought mandates effort to correct economic and social injustices in our communities (p. xiii). Social change is necessitated anywhere that injustice exists, and the Bible provides the Christian with the motivation and, in many cases, the method for change.

The book is divided into two broad categories that build a biblical basis for social change and then provide plans that employ the biblical base: (1) “A Biblical Theology of Social Involvement” and (2) “Paths to Justice.”

Part one is a helpful and often convicting biblical case for Christians being concerned and active in society, specifically where injustice exists. Mott argues that the theme of helping the oppressed is a concern of God expressed in both the OT and NT. The biblical calls to helping the sojourner, the widow, and the orphan continue from the prophets to the apostles. Mott’s main argument in this section is that ethics motivated by love should be the reason for active social participation for justice (p. 49). Mott correctly connects motivation to help others because of God’s value determination for individual humans with God’s own activity in grace toward his people. Evil, Mott argues, is both an individual concern as well as a product of social collectives, such as government. Since evil is present in both areas, both should be employed to bring about the necessary social change. Mott defines the role of the Christian participating in biblical justice as “taking upon oneself of the cause of those who are weak in their own defense” (p. 60; emphasis original). Overall, Mott’s biblical theology is representative of a high view of Christian Scripture as the source for answers to the questions of social justice.

Part two of the book is what many will find controversial, not because of any outlandish ethical quandaries, but rather because Mott offers pragmatic ways to move beyond the theoretical into the muck and mire of oppression and injustice. The strength of this section is that it seeks to employ the biblical theology of justice and love in practical ways in which Christians and Christian communities can participate. Mott begins with evangelism but says that this practice of verbal proclamation is a part, not the total, of God’s call to the believer. The Christian must also seek to reverse injustice by reflecting genuine community, noncooperation against unjust laws, taking up of just use of arms, and political involvement. While space does not allow a full engagement with these points, it will suffice to say that Mott is attempting to be biblical and practical in his application of part one. Since this book is written to a theologically astute audience, such as seminary students, this section is very profitable for discussion and reflection for true life application as an individual and as a pastor.

A brief word of warning for those who read this book is to be careful not to get lost in the opening of the book and its hermeneutical method. While many will, perhaps, agree with his biblical theology and, even further, his plan for change, the reader will be struck by Mott’s method of determining biblical meaning. Mott states that social concern presuppositions allow for the biblical reader to find new meaning and application of the biblical text and its emphases. Mott states that modern sociological and ethical categories suggest new possibilities of meaning and application (p. xii). The warning is not towards the newer categories helping with application, but rather with biblical meaning. One would hope that a biblical ethicist would seek biblical meaning, understanding their personal presuppositions, while remaining intellectually virtuous enough to allow the Bible to change what needs changing. While Mott is correct that all ethicists approach the biblical text with underlying beliefs that are involved in the process of determining meaning, ultimately the Bible should be allowed to present its meaning, and the ethicist should then seek to employ the meaning’s application.

This book will challenge the reader academically, but also personally, in its challenge to help the cause of the oppressed. Helping the helpless and defending the defenseless are clear calls in Scripture, and Mott correctly places the Christian in the middle of God’s work to bring hope and help to individuals and communities in need.