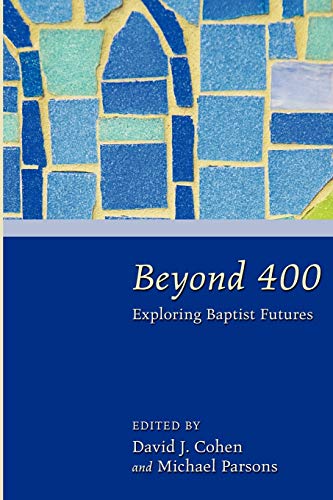 The year 2009 marked the 400th anniversary of the Baptist movement. The occasion inspired numerous conferences, symposia, articles, and monographs. Beyond 400: Exploring Baptist Futures represents the published proceedings of a conference held at Vose Seminary in Western Australia. The contributors include a variety of Australasian pastors and scholars, as well as the widely regarded English Baptist theologian Nigel Wright. The essays provide a useful glimpse into how Australasian Baptists are assessing their traditions and anticipating new challenges in the early years of the twenty-first century.

The contributors address a range of topics that hold interest for many Baptists, including those residing in places besides Oceania and the British Isles. Many contributors, especially Nigel Wright and Michael O’Neil, offer prescription as to the best way to contextualize Baptist identity and theology in the coming generation. Martin Sutherland, Peter Ralphs, and Michael Parsons address specific matters of ecclesiology. Richard Moore, Ian Packer, and Neville Callam offer constructive proposals concerning how Baptists should participate in the sacraments and gather for corporate worship. Other authors engage topics such as denominational leadership, social justice, the emerging church, the history of a charismatic Baptist mega-church, and the importance of missional house churches in evangelizing urban centers.

Numerous themes emerge from the pages of Beyond 400, many of which will be familiar to scholars of contemporary Baptist theology. Gender roles, spiritual gifts, the relationship between divine sovereignty and human responsibility, and the boundaries of evangelicalism each make at least one appearance. Several essays lament the relative paucity of Baptist systematic theologies. The shadows of the late North American Baptist theologians James William McClendon and Stanley Grenz loom large over much of the volume, as does the influence of the “Baptist sacramentalism” movement among English Baptists and some post-liberal Baptists in America. Many Baptists from across the theological spectrum will appreciate the emphasis on recovering the covenant ecclesiology of the early British Baptists.

Beyond 400 is one of the more stimulating volumes published in conjunction with the 400th anniversary of the Baptist tradition. North American Baptists, especially those of us in the South, frequently tend toward theological and historical myopia. Books like this help to remedy this situation as they allow us to engage the thought of Baptists who do not share our particular history and experiences on this side of the Atlantic. Scholars interested in the ongoing discussion about the nature of Baptist identity need to pay special heed to this volume.