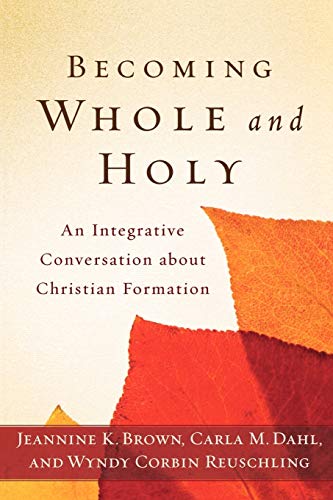 Becoming Whole and Holy: An Integrative Conversation about Christian Formation

In our earbud-embedded world where conversation is a luxury and interaction with fellow humans would involve turning off computers and phones, three authors have come together to remind us what true conversation is all about. Becoming Whole and Holy is an interdisciplinary, integrative dialogue, the joint work of colleagues who seek to understand the role of human formation in each of their own disciplines (hermeneutics, social science, and ethics) as well as how formation's interactions in one discipline informs its role in the other disciplines. Brown, representing hermeneutics, and Dahl, representing social sciences, are colleagues at Bethel Seminary in Minnesota. Reuschling, a former colleague who currently teaches at Ashland Theological Seminary in Ohio, represents ethics.

This book is divided into eleven chapters, with the first introductory and the last a case study. The middle nine chapters are divided into three groups of three. Within each grouping, each author takes a turn presenting two chapters followed by the third chapter in which the other two authors receive and integrate the presentation. They find points of resonance with their own disciplines, raise questions for further research and interact with points of dissonance between disciplines. These third chapters are presented in a friendly “letter” format to the presenter.

Throughout their dialogue, the authors take on the question of what it means to be human-answered in their title (and on p. 10) that to be “fully human means becoming whole and holy.” From this common platform, each takes on the topic of what becoming means in their respective disciplines. The goal is to allow “each discipline its full voice” (p. 10), valuing no discipline over the other. While some may argue that the discipline of biblical studies should trump the others, the authors maintain that no one can claim “objective or final understandings” of all that Scripture offers, thus they agree to maintain an understanding of each voice as equal “at the interdisciplinary table” (p. 14).

In chapters two and three, Dahl looks at formation in the social sciences as being both instantaneous as well as a long process. She emphasizes the role of love, which leads to trust and a trustworthy environment where change can occur in safety. Dahl also notes attitudes that can increase the responsiveness to God's formational work as well as constraints or obstacles to the process. In her view, even constraints can help shape one's becoming, with the exception being systems that shut down conversation and squelch growth. In the end, though none will achieve complete wholeness or holiness in this life, the process of becoming leads one to the ultimate goal of intimacy with God. Chapter four is Brown's and Reuschling's reception, interaction, and integration with Dahl's offering.

In chapters five and six, Brown takes her turn, beginning with a look at what the scriptural narrative states about human becoming, finding that becoming necessitates a return to God and then a participation “in the divine intention of imaging God” (p. 73). Brown, too, explores how this is lived out communally as well as individually, noting the culmination is yet to come. She further delves into two rubrics for becoming: dependence (of the finite upon the infinite) and discernment (“the process of watching for God's work, listening for God's voice, and following God's lead,” p. 81). As one progresses in their personal holiness, it should lead to community and communal holiness, which then should lead “to mission to the world and fullness of life or wholeness” (p. 97). Chapter seven again incorporates the reception and integration of the other two authors to Brown's offerings.

In chapters eight and nine, Reuschling brings her offering of the discipline of ethics and its contribution to the understanding of formation to the table. If becoming results in a particular moral framework, how does that play out in the actual reality of living one's life? How does being a created, finite being made in the image of God play out in my daily existence? Reuschling looks at the relationality of the Trinity as the model for our own relationality as humans. She then explores how this model informs our actions. Chapter ten is Dahl's and Brown's responses.

In their concluding chapter, the three authors have a roundtable discussion of how their studies of formation's integration with their disciplines plays out in the real life situation of immigration. They look at the narratives of the immigrants and the displaced in Scripture, the role of prayerful listening in hearing the needs of the other, and the social implications of differentiating between legality and morality. As the conversation progresses, each respectfully interacts with the others' perspectives, allowing themselves to be shaped by the others' views. The conversation is enlightening in many respects for the reader, not only in the topic discussed but also in their modeling the process of an integrative conversation.

This book is a tremendous read, one which could be included in any curriculum dealing with formation or integration. One downside was its slow start-fourteen pages to explain that they were going to have a respectful adult conversation. But in today's individualistic, fragmented, ear-budded world, perhaps an explanation of how to have a conversation is actually necessary.