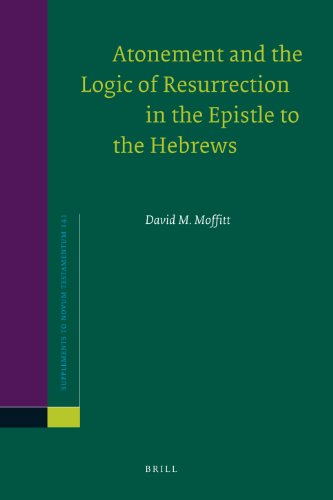 This volume, a revised version of the author's dissertation at Duke University (2010), seeks to refute the common belief that Hebrews sees little (if any) importance in the event of Jesus' resurrection. Rather, he argues, the resurrection plays a crucial role in how Hebrews understands Jesus as both Son exalted above the angels as a prototypical recipient of faith's inheritance and as High Priest who makes atonement on our behalf.

The starting point for Moffitt's argument is that Hebrews presents Jesus as an embodied person in heaven. As such, and only as such, he is qualified to receive the coming inheritance of Adam's descendants: exaltation above the angels and authority over the created realm. This argument is based primarily on the contrast between Jesus' possession of a physical body and the angels who are spiritual beings in Heb 1:5-14, and the subjecting of the οἰκουμένη (1:6; 2:5) to Jesus via his humanness in Heb 2:5-18 alongside second temple notions of the οἰκουμένη being ruled in the eschaton by Adam's descendants.

If Jesus is indeed our forerunner and example, as many texts in Hebrews seem to suggest, Moffit contends that such a notion is implausible apart from the resurrection. Jesus' testing with regard to his faith in the one “able to save him from death” (5:7), for example, is helpful to us in our testing only if he was indeed saved from death via the resurrection. In addition, Jesus' place at the head of the hall of faith, the forerunner of those who will receive the “better resurrection” (11:35), is valid only if Jesus has already received that resurrection.

The second main argument of the book is that if Jesus must have been raised to be the exalted “Son” whose siblings will someday share in his inheritance, the same is true for his role as their High Priest. Moffitt notes that Jesus was qualified to be a priest in the order of Melchizedek only on account of his “indestructible life” (7:16). He could not have been such a priest while on earth because he died-clearly at that point he did not possess indestructible life.

This clearly goes against the common assumption that Jesus offered himself as a sacrifice (a priestly act) while on the cross. Rather, Jesus' offering himself to God on our behalf took place after the resurrection when Jesus ascended bodily to heaven and presented himself in the heavenly sanctuary. This sequence of Jesus' atoning action correlates well, Moffitt argues, with recent studies in Leviticus that see the application of the blood (which represents the life of the victim, not its death), rather than the slaughter of the victim, as the ultimate atoning act. Atonement takes place not at the cross but rather in the presentation of Jesus' resurrected life in the heavenly sanctuary.

Thus, the story of Jesus in Hebrews is this: Jesus died, was raised, ascended, presented himself in the heavenly holy of holies, and was elevated above the angels to the throne at God's right hand. As Moffit summarizes, “His death sets the sequence into motion. His appearance before God in heaven effects atonement. The bridge between the two is his resurrection” (p. 294).

If a weakness exists within Moffitt's central argument, it is the initial claim that for Hebrews, Jesus' ascension to the throne is contingent upon his continuing incarnate state (as opposed to the spiritual nature of the angels). That some second temple texts (e.g., Life of Adam and Eve) saw the eschatological renewal as a material reality is apparent, but I am less convinced that Hebrews 1-2 views Jesus' enthronement in these terms. I am not saying that Moffitt is wrong but that I am not yet convinced.

I have doubts about a few peripheral elements, particularly his reading of Ps 40 vis-à-vis Heb 10 (pp. 234-47) and the use of later extra-biblical sources to suggest common earlier traditions (e.g., The Cave of Treasures [pp. 139-41] and Talmud Babli [pp. 150-55]). Some of these discussions also distract rather than contribute to the flow of the book; the argument (via the use of Ps 40 in Heb 10) that Jesus is the one who has already undergone the suffering that marks the way to perfection, for example, strikes me as a relatively straightforward point requiring less attention than it receives. Readers could skim these sections without losing the substance of the argument.

Finally, I find it unfortunate that Moffitt makes no reference to pre-modern Christian readings of Hebrews. What of the commentaries of Theodore of Mopsuestia, Chrysostom, Severian, Oecumenius, Photius, and Augustine, not to mention Luther, Erasmus, and Calvin? So frequently the “consensus” of scholarship refers solely to the last century, and in this case the reader is left wondering whether any of these earlier interpreters of Hebrews have anything to say about its perspective on the resurrection.

A colleague who interacted with Moffitt's work in its earlier stages predicted to me that it would bring about a “Copernican-like revolution” in Hebrews scholarship. That is probably a bit strong! Yet Hebrews' lack of emphasis on the resurrection is certainly a truism in current scholarship, and this volume makes a very strong case for overthrowing that consensus. Whether dealing with specific texts or theological issues in Hebrews, subsequent works will have to take Moffitt's work into account.