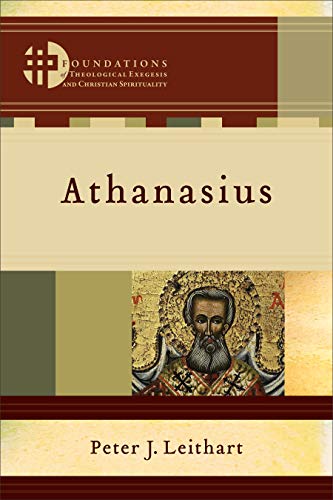 Peter Leithart is senior fellow of theology at New Saint Andrews College and serves as the organizing pastor of Trinity Reformed Church in Moscow, ID. Adding to his published contribution to a wide range of topics, he has produced two recent works on Patristics, including his well-received Defending Constantine (IVP, 2010).

The present volume is the first contribution to the Foundations of Theological Exegesis and Christian Spirituality series edited by Hans Boersma and Matthew Levering. The editors desire to address the relation of biblical exegesis, dogmatic theology, and participatory metaphysics within the thought of a particular church father (pp. ix-xi). The purpose of this effort is to recover the shared inheritance of the Nicene faith as an important entry point for the growing interest in ecumenical endeavors within Christianity. The editors and Leithart foresee this volume furthering such discussions within seminary and university communities as well as among educated lay readers.

The introduction establishes a guiding rule for reading Athanasius according to his own convictions: Christ unites Scripture and all things, for the nature of all things is about Christ (pp. xv-xvii). Christocentric metaphysics is thus established as the exegetical approach of Athanasius that must be the lens through which one interprets his works (for examples, see pp. 28-33, 39-41, 53). Leithart's first chapter provides the context in which Athanasius lived and wrote as well as an overview of Athanasian scholarship. It also reiterates Leithart's established position that Athanasius viewed the relationship between Scripture and metaphysics united in Christ as all of life and history receive proper interpretation through the Word depicted in the Bible (p. 25).

The second chapter establishes Athanasius within the Nicene tradition of theological interpretation as opposed to modern critical approaches to understanding Scripture. Athanasius considered doctrine not as an obstacle but rather a clarifying agent. He was in a unique position as one relying on the authority of Nicene tradition-a tradition that he helped formulate directly-in his embattled interpretation of Scripture against Arianism (pp. 27-28). For him, conformity to Scripture was the “touchstone of all theological truth. The Arians agree, and as a result the battle over Arianiasm was largely an exegetical battle-not a battle for the Bible, but a battle over the Bible” (p. 33). Such exegetical skirmishes were not merely distant contemplations of Christ but rather participation with Christ in his triumph over death by refuting devilish distortions of Scripture (p. 55). Leithart addresses contemporary Trinitarian considerations through the teachings of Athanasius in chapter three, placing this doctrine at the center of the patristic “evangelization of metaphysics.”

Chapter four examines the doctrine of creation as an equally important aspect of Athanasius's theology as his Trinitarianism, yet his views on creation remained subjected to Christ as the central element in his thinking (p. 92). Chapter five argues that Athanasius held the incarnation of Christ as the ultimate meaning and crux of history as Christ took on flesh to do the works of the Father. Through the incarnation, the impassible Creator suffered so that passible creatures might triumph over death and suffering, thus leading to deification (pp. 145-46). The final chapter highlights Athanasius's view concerning the new creation: the goal was initiated by God's grace, secured by the incarnation, and assured because of the resulting ontological change of God's creation. For Athanasius, the Christian politeia, a collective way of life, is Christ's means for applying his triumphant work to remake the world and thus bring about this goal (p. 173).

Many aspects of this work will lead readers to value Leithart's contribution. Students new to the field of Patristics often search in vain for an introductory text-an issue that Leithart resolves in this book. He offers adequate citations that will introduce researchers to the key works associated with Athanasius and the broader field of study. Also, Leithart provides a helpful contribution to the field of hermeneutics in his discussion of Athanasius as a representative of the Nicene tradition of theological interpretation of Scripture. This aspect of his work helps readers understand Athanasius's exegetical approach, thus fulfilling a central mandate of the Foundations of Theological Exegesis and Christian Spirituality series. Certainly, Leithart furthers the editors' desired ressourcement of Christianity's shared Nicene inheritance through this work. Finally, the author provides a systematic approach to understanding Athanasius, whose lack of systematization can prove difficult for the newcomer.

Many readers, however, may find certain elements in Leithart's book to be wanting. Perhaps, his audience will find the work a bit difficult in certain places as he builds upon an existing scholarly conversation on matters such as the Trinity. While Leithart does a fine job explaining the major perspectives, this discussion may be better suited for a graduate audience to the exclusion of university students and an educated laity. Another minor issue is Leithart's truncated treatment of Athanasius's historical context. Possibly resulting from his excellent systematic examination of this church father, the author provides some insight to Athanasius's circumstances. Readers will likely come away from such passages, however, with more questions than adequate answers. For instance, why was Athanasius exiled, and how did those experiences impact his writings? Also, did certain bishops, such as Eusebius of Nicomedia, support Arius because they disagreed with Athanasius's teachings on the matters that Leithart examines?