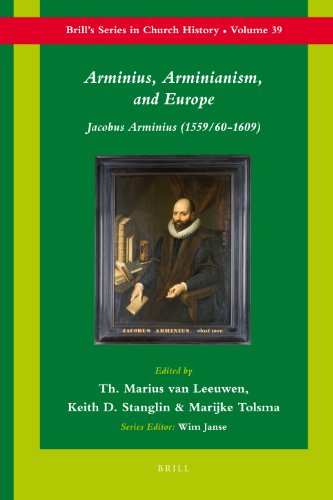 Th. Marius van Leeuwen, professor at the Remonstrant Seminary, Keith Stanglin, professor at Harding University, and Marijke Tolsma, also professor at the Remonstrant Seminary, have edited a significant volume on the life and theology of Arminius and Arminianism. The volume rides on the tail of October 19, 2009, the 400th anniversary of the death of Jacobus Arminius. The anniversary was commemorated at a conference at Leiden University, and the chapters in this volume are drawn from the conference. The volume is an effort to revisit the theology of Arminius, particularly with reference to the debate over whether Arminius was a pioneer who “enriched the Reformed tradition” or a heretic who founded a new tradition as an alternative to Reformed theology.

The volume has several strengths. First, it is diverse in its presentation, covering an array of topics. Probing the table of contents is revealing. The volume begins with van Leeuwen’s introduction, which itself is a prologue to the life of Arminius. Part 1, “Jacobus Arminius,” contains chapters by Keith D. Stanglin, “Arminius and Arminianism: An Overview of Current Research,” William den Boer, “Jacobus Arminius: Theologian of God’s Twofold Love,” Aza Goudriaan, “‘Augustine Asleep’ or ‘Augustine Awake’? Jacobus Arminius’s Reception of Augustine,” and Eric H. Cossee, “Arminius and Rome.” Part 2, “Arminianism and Europe,” delves further into Arminius and the Remonstrants who followed, including chapters by Kestutis Daugirdas, “The Biblical Hermeneutics of Socinians and Remonstrants in the Seventeenth Century,” Andreas Mühling, “Arminius und die Herborner Theologen: am Beispiel von Johannes Piscator,” Maria-Christina Pitassi, “Arminius Redivivus? The Arminian Influence in French Switzerland and at the Beginning of the Eighteenth Century,” and David Steers, “Arminianism amongst Protestant Dissenters in England and Ireland in the Eighteenth Century.” The volume concludes with Part 3, “Arminius’s Iconography and Bibliography.” While Parts 1 and 2 examine the theological, cultural, geographical, and political impact of Arminianism, Part 3 explores past, present, and future areas of research, including two chapters by Marijke Tolsma, “Facing Arminius: Jacobus Arminius in Portrait” and “Iconographia Arminiana: Portraits from 1609 until ca. 1850,” along with a concluding chapter by Keith D. Stanglin and Richard A. Muller, “ Bibliographia Arminiana: A Comprehensive, Annotated Bibliography of the Works of Arminius.” This last chapter by Stanglin and Muller is especially valuable as a resource to scholars as it provides an official, updated bibliography for contemporary research. Regardless of whether one agrees with the agenda of the volume or the overall thesis presented by many of the authors, it is clear that a strength of the volume is its ability to investigate not only the theological views of Arminius and the Remonstrants, but the geographical, cultural, and political influence of the Arminian movement in the seventeenth and eighteenth centuries.

Second, though the volume is very favorable towards Arminius, certain chapters do recognize inconsistencies in his thought. For example, Aza Goudriaan states that according to Arminius,

it is up to the human being to decide whether to use free choice well and to accept grace in order to be saved. Those who deliberately refuse grace will not be saved. According to Arminius, this is not a Pelagian view, but rather what Augustine and the author of De vocatione gentium defended. As far as Augustine is concerned, Arminius backed this up by quoting from De natura et gratia—for Arminius a less suspicious book to cite from than Augustine’s De libero arbitrio, where the same passage is found. (p. 60)

It is remarkable that Arminius, in support of his doctrine of resistible grace (synergism), could quote Augustine’s De natura et gratia in his favor when clearly the late Augustine was an advocate of effectual grace. Goudriaan seems to recognize the inconsistency:

In polemics he attempted to show that Augustine did not share some of the views of his Reformed opponents. On the other hand Arminius distanced himself from Augustine on various accounts. The late Augustine in particular did not fit in well with the overall tenor of Arminius’s theology. Arminius distanced himself from Augustine’s exegesis of Romans 7 and 1 Timothy 2:4 and from his doctrine of predestination, which he did not see as a core component of Christian orthodoxy. Arminius’s election of believers was not what the late Augustine advocated, nor was Arminius’s distinction between sufficient and efficient grace an Augustininian invention. . . . The Synod of Dort, however, came closer to the theological intentions of the late Augustine when it quoted another passage from De correptione et gratia that expressed both irresistible grace and final perseverance: ‘The will of no human being can resist God when he wishes to save . . . (. . . deus, cui volenti facere saluum nullum hominum resistit arbitrium)’. For Arminius’s theological purposes a late Augustinian statement such as this was less convenient. (pp. 71–72)

Goudriaan is right: Dort, rather than Arminius, correctly quotes and preserves the intention of Augustine. While Arminius is correct that the Reformed did not affirm all of Augustine’s views, nevertheless, on the doctrine of sovereign grace there is no question that Arminius stands in opposition to Augustine, regardless of how Arminius tries to quote him to his advantage.

In spite of its strengths, the volume does have weaknesses. Perhaps one that deserves mention can be seen when van Leeuwen opens the volume by asking the hotly debated question: “Was Arminius a pioneer, who enriched the Reformed tradition by opening it towards new horizons, or a heretic, who founded a new tradition ‘as a full-scale alternative to Reformed theology,’ starting from presuppositions ‘opposed to virtually all the tendencies and implications of Reformed theology’ (Muller)?” (p. ix). Van Leeuwen, contra Richard Muller, is quick to answer, “Or perhaps: did he himself stay within the Reformed tradition, but with some intuitions which, when worked out by his followers after his death, alienated them from the tradition and made them into heretics?” (p. ix). Stranglin also raises the debate over whether Arminius should be considered Reformed. According to Carl Bangs, says Stranglin, the answer must be “yes.” Bangs argues, following Hoenderdaal, “the Calvinist synods that sanctioned the Belgic Confession and Heidelberg Catechism before the national Synod of Dort (1618–1619) had only regional status and were not seen as binding on the Dutch Reformed Church, or, for that matter, on Arminius” (p. 11). Bangs argues that to view Arminius as outside the Reformed tradition is to fall prey to anachronism, reading Dort’s “restrictive definition of Reformed theology” back into the previous generation.

However, more recently Richard Muller has argued that there are several problems with the thesis presented by Bangs (see “Arminius and the Reformed Tradition,” WTJ 70 [2008]: 19–48). For one, the synods were not lacking authority as Bangs supposes. Muller’s historical work here is commendable as he demonstrates that the synods were not undermined and even Arminius himself recognized their authority from a confessional standpoint. Second, “Muller argues that, even if the documents left some wiggle room for Arminius’s views, the authorial intent behind them, which ruled out his views, was clearly known to Arminius” (p. 12). Moreover, by the seventeenth-century the Dutch synods had already denied the doctrine of conditional predestination which Arminius clearly affirmed. The Dutch churches had already declared that the biblical view was unconditional election and had established that view confessionally. Yet though Stranglin raises the debate, his conclusions are less than satisfying. While Stranglin does tip his hat to Muller, stating that one must “deal with Muller’s arguments,” Stranglin concludes, “there is more common ground in this debate than is at first apparent” (p. 12). The common ground Stranglin refers to is Muller’s agreement that Arminius “was certainly Reformed in the ecclesial sense, in his subscription to the standards, and in his colloquial sense of Dutch Protestants” (p. 12). Here Stranglin sees Muller as having common ground with Bangs. However, if this is common ground, it must be admitted that it is not much. Stranglin never mentions the very significant fact that Muller brings into question the credibility of Arminius in affirming the confessions when he was in full knowledge that they taught unconditional election. As Muller argues,

The evidence also points toward the conclusion that Arminius, a pastor and professor under extreme pressure from colleagues, from the church, and ultimately from the civil authorities, was less than forthcoming about his views. Arminius in fact noted his efforts to be ‘silent upon some truths’ and ‘expedient’ in his remarks. His affirmations of the Reformed confessional standards were made in the context of rationalizations about the meaning of the confessional texts, rationalizations that themselves were at variance with the views of the authors of the documents. . . . If Arminius was ‘a normally honest man,’ as Clarke avers, he was certainly not forthcoming concerning the theological engine that ran his system.” (“Arminius and the Reformed Tradition,” pp. 46–47)

Though Stranglin’s chapter is remarkable in its survey of current research, his ambiguity here with the debate between Muller and Bangs is less than fulfilling. Consequently, Muller’s thesis still remains intact: Arminius was considered a heretic whose theology was a full-scale alternative to Reformed theology and in opposition to the Reformed confessions.

In conclusion, van Leeuwen, Stanglin, and Marijke Tolsma have put together a volume that should be applauded for its depth of scholarship and contribution to the study of Arminius and Arminianism. Nevertheless, the volume is also a reminder of how drastically Arminianism differs from Calvinism not only in the area of theology proper but especially in the area of soteriology. As Cossee observes, following Arminius “the Remonstrants made a powerful plea for acknowledgment of a human contribution to the implementation of God’s intention towards man” (p. 197). Here we see the shibboleth: man has a contribution to make to salvation. For those in the Reformed tradition, such a view compromises the glory that belongs to God alone for the accomplishment of salvation.