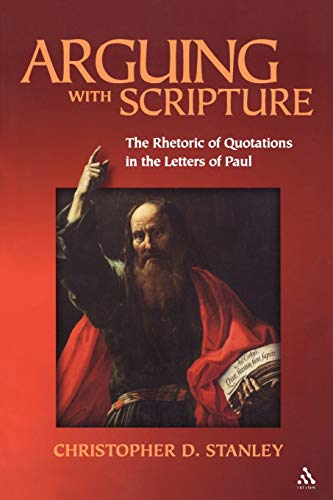 ARGUING WITH SCRIPTURE: THE RHETORIC OF QUOTATIONS IN THE LETTERS OF PAUL

In Arguing with Scripture, Christopher D. Stanley deals with the vexing question of what Paul was actually doing when he quoted from the Scripture of Israel. This question has gained renewed interest since the publication of Echoes of Scripture in the Letters of Paul in 1989 by Richard B. Hays. The debate can be divided roughly into two groups: the ‘Maximalists’, or those who tend to see the quotations of Scriptures as evoking the entire scriptural context in which they are taken, and are integral to what Paul had to say; and the ‘Minimalists’, or those who argue that Paul was not really concerned with the context of the Scriptures he quoted, but was most likely forced into using ‘proof-texts’ from Scripture by his opponents.

Enter Stanley with a new methodological approach which promises to offer new insights into Paul’s use of Scripture. In chapter one, Stanley explains that this new approach is modeled upon ‘New Rhetoric’, the theoretical approach developed by Eugene White and Chaïm Perelman, which aims to examine texts for the effects they have on audiences. Key to this methodology is seeing Paul’s correspondence as occasional, dealing with specific first-century Christian in order to motivate them to believe and act (or stop believing and acting) in particular ways (3). The next three chapters unfold how the study of ‘New Rhetoric’ can be used to enhance Biblical Studies. Chapter two surveys the recent studies concerning the quotation process. In linguistics and literary studies, in an effort to get a broader understanding of the ways ‘New Rhetoric’ is currently being employed. Chapter three looks at the first century context to expose some of the mistaken assumptions scholars make about Paul’s quotations. Chapter four concludes this section by framing a methodology for examining the rhetorical significance of Paul’s biblical quotations. The next four chapters (5–8) put into practice what was learned from the preceding chapters by presenting case studies which apply this methodology to the various Pauline texts. In chapter nine Stanley concludes his study by examining the overall rhetorical effectiveness of Paul and his use of Scripture.

This accessible study offers the reader a tremendous amount of insight into first century Christianity, exposing some of the fallacies that often are assumed about Paul’s audiences. The fruit of a metorical approach is most clearly seen in chapter 4 where Stanley divides the recipients of Paul’s letters into three hypothetical groups. The first group, or the informed audience’, are those in Paul’s audience who would have had intimate knowledge of the Scriptures and would have agreed with Paul’s own interpretations of them (68). The second group, or the ‘competent audience’, are those whose knowledge of the Scriptures would have been broad enough for them in recognize most, but not all, of Paul’s references to biblical texts. They would most likely only be able to grasp Paul’s quotations in the current rhetorical context in which Paul places them (68–69). The third group, or the ‘minimal audience’, are those who would have only the slightest knowledge about the content of the Jewish Scriptures, but nevertheless, at a minimum would have understood that Paul was quoting from an authoritative text (69). Stanley applies this reading strategy across a broad spectrum of Pauline texts and shows just how unlikely it would have been for most of Paul’s audience to catch any deep significance of his quoting of Scriptures.

This book is a fresh approach to Paul’s use of Scriptures that has much to offer; it would make a great companion volume to Hays’ work, and will certainly be of benefit whatever side of the Maximalist/Minimalist divide one resides.