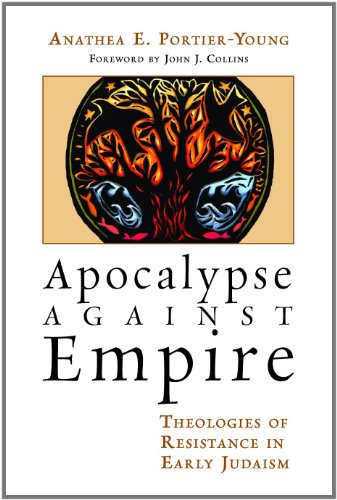 Apocalypse against Empire: Theologies of Resistance in Early Judaism

Since the publication of Paul Hanson’s The Dawn of Apocalyptic in 1975, there has been a rather stated spike of genre-explication studies with respect to apocalyptic. This genre-explication has moved beyond the mere form-critical analyses to encompass the sociological function of the genre. Whereas older studies on apocalyptic were certainly aware of the political shades which colored various texts, the complexities of power relations, the variegated expressions of resistance, and the entangled realities of domination and coopted forms of indigenous struggle lacked appropriate rigorous engagement with social theoretical models. This, of course, may have been by design in that the primary emphases of apocalyptic scholarship orbited around the literary and historical-traditional. Anathea E. Portier-Young has produced a volume which intends to incorporate the literary features of the apocalyptic genre (e.g., prophetic reviews of history, narrative frames, angelic mediation, and revered human recipient of revelation), the historical and socio-rhetorical contexts of apocalyptic texts, and a social theoretical savvy into a fresh reexamination of apocalyptic texts. Portier-Young argues “that the first Jewish apocalypses emerged as a literature of resistance to empire” (p. xxii). It was during the reign of Antiochus IV where the first historical apocalypses began to take shape (p. xxi). As such, his and other Hellenistic empires became the forces against which the genre resisted. Because the boast of empire’s domination reached beyond the physicality of the everyday and into the cosmological and epistemological spheres, apocalyptic responded by challenging the legitimacy of empire’s sovereignty with a universality of its own.

Part One consists of one chapter and attempts to lay a theoretical basis for and working definition of resistance. Defining a term like resistance is quite difficult in that there appear to be quite distinct poles of its usage, namely, from armed revolt to silent foot-dragging (p. 6). Central to Portier-Young’s approach is power relations and how resistance “participates in a radical relocation of ultimate power” (p. 7). She settles for a conceptual framework to guide her investigation instead of rigid definition:

Part Two consists of five chapters which trace the beginnings of Hellenistic rule and presence in Judea. This is the strongest section. Her nuanced reading of Hellenistic rule in Judea and the transition into Seleucid rule specifically through the form of the so-called six Syrian wars provides much to be commended. Perhaps most pointedly, Portier-Young exonerates insanity charges against Antiochus IV, demonstrating instead his behaviors as the result of a shrewd Realpolitik. What is more, Antiochus III is shown to be responsible for setting the context of Jewish revolt more than he previously has. His victory over Ptolemy V’s general Scopas in the battle of Panion (200 b.c.) introduced him to the formidable foe of the Roman army at the Battle of Magnesia (a.d. 190) for control over Greece (see, esp., pp. 78–114). The Roman victory introduced the severe indemnities of the Treaty of Apamea. The financial pressures of this “treaty” led to the increased taxation of Judean lands and the posturing of the Jewish nobility—with Simon setting the precarious precedent of buying the priesthood. This is significant and is slightly understated by Portier-Young and her insistence of reading apocalyptic as resistance literature against empire. Much of the literature could equally be read as latent polemics against the pollution of the priesthood—a kind of reading of resilience in terms of Jewish identity. Nevertheless, her historical essays on the re-creative measures of imperial conquest, the role of Seleucid terrorist activities, and the rise of Antiochus IV’s persecution and his edict are excellent and deserving of the widest readership.

Part Three consists of four chapters which examine specific texts: Daniel, the Apocalypse of Weeks, and the Book of Dreams. These texts, according to Portier-Young, represent “writings of resistance to Antiochus’s [IV] program of terror, conquest, de-creation, and recreation” (p. 218). The volume concludes with a helpful conclusion and an epilogue which suggests fruitful paths for further study.

On the whole, Portier-Young’s volume is a remarkable achievement in terms of its theoretical sophistication, historical sensibility, and textual rigor. I plan to return to this text often.