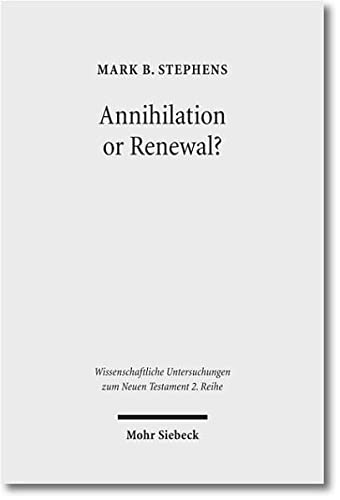 Annihilation or Renewal: The Meaning and Function of New Creation in the Book of Revelation

This book is a slightly revised version of the author’s 2009 PhD thesis from Macquarie University, Sydney, Australia. Unlike many doctoral dissertations, this one touches on a topic of much interest in the modern church and in current theological discussion, namely, the place of earthly creation in the salvific plan of God. Stephens’s primary aim in this study is to determine whether the book of Revelation presents the original creational order as one that is ultimately destroyed by God’s judgment or whether the picture is instead of a finally renewed cosmos, in material continuity with God’s original creation.

Chapter 1 lays out the parameters of the study as well as its methodology. This work attempts to survey new creational language in Revelation as a whole in order to avoid an atomistic interpretation, a concern especially to be praised in the field of biblical studies, where such atomism often significantly skews exegetical investigations.

Chapter 2 surveys the issue of continuity between creation and new creation in the OT. Stephens focuses particular attention on the prophetic imagery that portrays the eschatological transformation of creation into a place of extraordinary material abundance. He concludes that the picture is not entirely consistent in that some texts focus on renewal, while some seem to indicate that creation will ultimately be destroyed, even if ultimately there is a re-creation in the end. A common focus of Stephens’s chapter is critiquing those who argue that the language of creational renewal represents a merely metaphorical (rather than genuinely physical) depiction of transformation. He also insists that those places in the OT that speak of the destruction of the world often appear to be “deliberately hyperbolic” and need not entail “the literal and actual dissolution of the cosmos” (p. 41).

Chapter 3 examines the continuity question in Second Temple Jewish writings. Stephens finds a similar picture as obtained with regard to the OT (some emphasize renewal, some destruction and replacement), although with a higher amount of diversity. Considering how central the OT is in Revelation, it is somewhat disappointing to see nearly twice as much space devoted to analysis of Second Temple texts as is devoted to the OT, but given the genre expectations of biblical studies dissertations, this is understandable, even if regrettable.

Chapter 4 briefly delves into the issue of new creational continuity in Rom 8 and 2 Pet 3:5–13. It concludes that Rom 8 “clearly and unambiguously” testifies “to material continuity between present and future” creation (p. 123). Regarding 2 Pet 3:5–13, Stephens recognizes the strong prima facie argument that it is speaking of the eschatological destruction of the present creation, but wonders whether the focus of the passage is more on ethical change than on the actual end-time destruction of creation.

Chapter 5 offers an illuminating and up-to-date account of scholarship on the structure and setting of Revelation. He isolates two main issues relevant for his thesis: (1) sporadic Christian suffering for refusing to reverence the Roman emperor and (2) a lack of suffering among some Christians due to their compromise with the cultural norms of contemporary Roman society.

The book’s main argument is found in chapter 6, which gives a detailed study of a variety of passages in Revelation that deal with new creation. With many of the texts, Stephens admits that the evidence regarding continuity between old and new creation is ambiguous, although he finds no texts that explicitly rule out such a motif and finds much support for the notion that one of the overarching purposes of Revelation is to show that new creation is a putting right of everything that is wrong with the old creation, rather than an annihilation of the old creation and a replacement with a new one. In the locus classicus for new creation in Revelation (21:1–22:5), he sees “a rich medley of images and auditions” which communicate “the cosmic dimensions of eschatological salvation” (p. 256).

Stephens’s book is a stimulating study on an important theme. He clearly recognizes and addresses the central issues without getting entangled in distracting minutiae. The focus on the goodness of creation and the creational dimensions of eschatological redemption both in the OT and in Revelation is also to be appreciated.

There are, however, some places where Stephens’s overall thesis could be critiqued. Stephens at numerous points chides those interpreters who dismiss the language of creational abundance in the OT prophets as being a merely metaphorical depiction of the divine removal of sin and dysfunction from the world. Yet at the same time, Stephens is content to argue that the apparent indications of creational destruction and judgment in the biblical writings should not be pressed in a hyper-literal fashion because obvious absurdities would result. The same could be said for the apparently hyperbolic language of creational fecundity in the OT. Perhaps the language of physical renewal, as well as of catastrophic physical destruction, was never meant to be read in a literal (literalistic?) manner. This is not to argue that creation itself is not renewed, but simply that the metaphorical (especially the hyperbolic) nature of both new creation and judgment language must be attended to with adequate sophistication.

One other point is worth mentioning: perhaps the question of continuity vs. re-creation is not the right question to pose to the text of Revelation. Is it not rather the fact and meaning of new creation that dominates the book? As Stephens himself recognizes (in many places, but see e.g., p. 238), many texts in Revelation simply do not seem to give a clear answer about continuity, although they do clearly emphasize that new creation means the eradication of sin and evil from God’s creation as well as the perfect communion that will exist between God and his people in the new creation (see esp. pp. 256–57).

In sum, Stephens has presented a careful and enlightening study of the “cosmic dimensions of eschatological salvation” (p. 256) in Revelation, although to my mind his book gets somewhat sidetracked in delving into whether creation and new creation are continuous. In Revelation all of God’s creation is good, and new creation is not the abandonment of creation. Neither of these two notions, however, requires that present and future be connected by a seamless line, rather than a sharp break caused by divine judgment—a break, however, that is followed by a new heavens and new earth, God’s creation as it is meant to be.