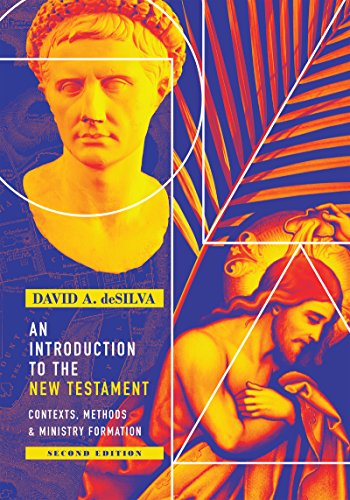 AN INTRODUCTION TO THE NEW TESTAMENT: CONTEXTS, METHODS AND MINISTRY FORMATION

At least until the new ‘Carson and Moo’ appears from Zondervan, this will be the premier evangelical introduction to the New Testament. DeSilva, New Testament professor at the United Methodist Church’s Ashland Theological Seminary in chio, is best known for his writings in sociological and rhetorical criticism. Thus, a key distinctive of this volume involves his widespread applications of these methods. Indeed, multi-page excursuses in almost every chapter introduce students to the whole range of specialized, critical tools, complete with exercises for practice in applying them. Shorter sidebars treat other specialized topics that would distract from the regular text or present helpful tables, charts or maps. Each chapter closes with detailed, thoughtful proposals for ‘ministry formation’, while black-and-white pictures regularly punctuate the book with photographs of key NT sites and artifacts. All of these features add immensely to the value of the volume.

The sequence and selection of chapters remains reasonably traditional: historical, religious and socio-cultural backgrounds, ‘the four gospels and the one Jesus’, individual treatments of Mark, Matthew, Luke, Acts, John, and the Epistles of John, a ‘prologue to the study of Paul’s letter’s, separate chapters on most epistles except for the predictable groupings, and the book of Revelation. Select and mostly current bibliographies refer readers to additional sources throughout. DeSilva does not survey the actual contents of a book in sequence (save for giving his outline), nor does he delve into many exegetical controversies (presumably leaving these tasks to lecturers), but he thoroughly discusses classic introductory topics and key themes, while more distinctively focusing on insights from literary and social-scientific criticisms.

Readers looking for conservative evangelical conclusions on every point of introduction will be disappointed. DeSilva believes that there are some genuine contradictions among the Gospels, that Luke may have created some of the speeches in Acts, that Luke-Acts was probably written in the 80s, that there is a stronger case for Lazarus than for John, the son of Zebedee, as author of the Fourth Gospel, that 2 Peter is pseudepigraphical, and that an otherwise unknown John penned Revelation. On the other hand, he compiles solid cases for Pauline authorship of all the other ‘deutero-Pauline’ literature, and for Mark, Matthew, Luke, James, Peter and Jude as the authors of the other books traditionally associated with them (though at times leaving his own conclusions unstated). He opts for an early date and a southern provenance for Galatians, defends the unity of 2 Corinthians and Philippians, and offers a balanced assessment of the ‘new perspective’ on Paul.

The chapters on Mark and Matthew have an unusually full treatment of their uses of the OT, while the discussions of Luke and Acts seem least abreast of secondary literature. DeSilva’s views on John are disproportionately indebted to Paul Anderson’s sometimes idiosyncratic work. The chapters on the Pauline epistles and Hebrews are the strongest in the book, although deSilva seems unaware of current scholarship on pseudepigraphy. With several recent studies, he thinks Paul wrote Philippians from an Ephesian imprisonment; with less support, he doubts Paul had actual opponents in Philippi. Like many recently, deSilva finds Onesimus appealing to Paul as an amicus domini rather than a runaway slave; more tenuously, he also places Paul in Ephesus for the writing of Philemon. He ignores the case for Jewish-Christian day labourers exploited by absentee landlords as comprising a majority in James’ congregations, but he clearly recognizes the problems of a ‘Left Behind’ approach to Revelation ‘Revelation is as much challenge and protest as it is comfort and encouragement’ (898).

Even after the new ‘Carson and Moo’ appears, deSilva’s introduction will be a strong competitor for pride of place among evangelical writers.