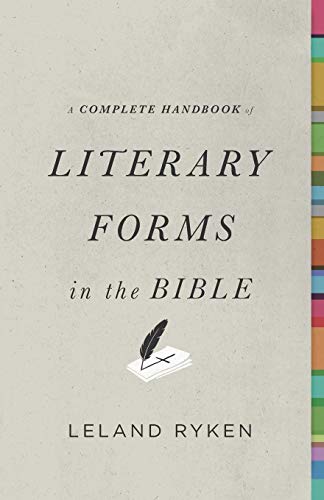 A Complete Handbook of Literary Forms in the Bible

Philip the Evangelist asked the Ethiopian eunuch, “Do you understand what you are reading?” The eunuch did not; he needed someone to explain Isaiah 53:7–8 to him. In the same way, Leland Ryken, the literary evangelist, asks the question, “Do you understand what you are reading?” And Ryken anticipates that many readers of the Bible will answer this question like the Ethiopian eunuch: “How can I unless someone explains it to me?” Ryken’s work, A Complete Handbook of Literary Forms in the Bible, provides an answer to these sorts of questions. The piece seeks to achieve two purposes. First, Ryken attempts to define and illustrate literary terms that one may hear when the Bible is taught or read in conjunction with biblical commentaries (p. 9). Second, Ryken seeks to introduce and explain the nature, characteristics, and function of literary forms in the Bible so that readers may discover the richness of the text’s content and meaning through the form in which they are conveyed (pp. 9–10). In so doing, Ryken hopes to offer “practical help to the general Bible reader as well as to scholars who teach the Bible” (p. 10).

This practical help is delivered throughout the Handbook, where Ryken discusses literary terms, genres, literary techniques, motifs, archetypes and types scenes, figures of speech, rhetorical devices, stylistic traits, and formulas in alphabetical order. The individual entries operate under the assumption that the content of a text is communicated through forms that are part and parcel of the text’s meaning. And the vast majority of these entries move beyond a definition of these literary forms and a description of their fundamental “ingredients” to an illustration of their use and function through specific biblical texts. In fact, many entries include illustrations from both the Old Testament and the New. The combination of definition, description, and illustration in a clear format and through accessible language is thus a hallmark of the Handbook.

In addition to the general nature and characteristics of the individual entries within the Handbook, it is important to note that many of its entries offer sound advice and open stimulating horizons. For example, on many occasions, Ryken notes that all the elements characteristic of a literary form may not be present in a text (e.g., pp. 74, 90). In certain instances, he identifies the way in which biblical texts mirror and modify elements common to literary genres elsewhere in the ancient world (e.g., p. 81). He includes entries that describe methodological approaches to certain literary forms, such as lyric, parable, personification, and proverbs. And he introduces genres that provide a useful heuristic guide for reading biblical texts. Among these genres, “docudrama” may be the best example (pp. 63–64). According to Ryken, docudrama is a genre of modern visual media which employs a set of stock techniques to convey information about a subject. These techniques include the communication of factual information, interviews with eyewitnesses, quotations from the subject of the piece, and clips of the physical landscapes in which the subject performed important actions, just to name a few (pp. 63–64). As Ryken observes, docudrama would be anomalous in the ancient world, but the techniques used in docudrama are analogous to the techniques used in biblical narrative. Accordingly, this form provides a creative and imaginative framework within which to read certain texts.

While one might question whether Ryken’s work is a complete handbook of literary forms in the Bible, a more important question looms throughout the volume: Are literary genres pure, fixed ontological categories into which readers place texts? Or are literary genres fluid and flexible forms that integrate and gesture to ingredients common to other genres? How one answers these questions will shape the way in which one uses Ryken’s Handbook. If one assumes that genres are pure, ontological categories, then Ryken’s Handbook provides a taxonomy of literary forms into which one may place a text. If, however, one assumes that genres are fluid, then Ryken’s Handbook defines and describes various literary forms that may be integrated and included in a single text. By a single text, I am not referring to an “encyclopedic form,” like the prophetic books, wisdom literature, or the Gospels, each of which includes a host of genres. I am instead referring to a single discourse unit such as the parental discourse in Proverbs 5, which contains elements of both the genre of instruction and the genre of love poetry. In the same way, the discourse in Proverbs 7 seems to intermingle the genre of instruction with the genre of fictional or imaginative literature (see Daniel J. Estes, “Fiction and Truth in the Old Testament Wisdom Literature,” Them 35 [2010]: 387–99). If one approaches these texts in Proverbs from an ontological perspective, they would be divided into units, and thereby slotted into categories that tend to be mutually exclusive. But if one is free from the presupposition that genres are fixed (as form critics have tended to believe), they may be read as discourses that mingle elements of different genres to produce and organize meaning, rather than fit into a specific category.

In this vein, some discussion of genre theory in the introduction to the Handbook would help readers use the volume more effectively. This would provide a framework within which to understand, for instance, how the narrative concerning David and Goliath can be classified as a “coming of age story” (p. 47), a “conflict story” (p. 47–48), and a “conquest story” (p. 49). In addition, a Scripture index would be invaluable for readers who are unfamiliar with many of the literary forms in the piece but are interested in using it as a reference volume for study or sermon preparation.

Despite these comments and questions, Ryken has produced a very helpful Handbook. The volume accomplishes its goal and will benefit many Bible readers and scholars.