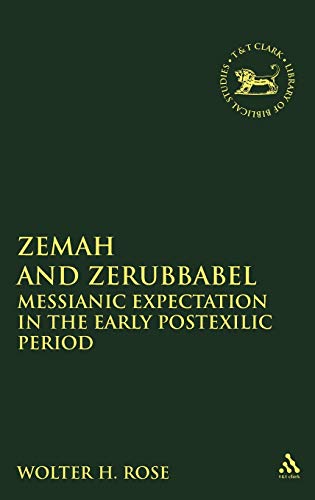 The majority critical consensus holds that Zechariah and Haggai expected Zerubbabel, the governor of Judah and a Davidic prince, to restore the dynasty and occupy the throne as the legitimate heir. This view holds that Zerubbabel is to be identified with ‘Zemah’ (usually translated ‘Branch’), the figure who is the subject of oracles in Zech. 3:8; 6:12. It is also usually held that Zechariah expected some kind of dyarchic polity for the postexilic period embracing Zerubbabel as king and Joshua as high priest.

Rose’s book marks a radical departure from the established interpretation of these passages. Using some very detailed grammatical, semantic and literary-critical arguments, he proposes instead that Zemah denotes a future royal figure modelled on David and sent by God to bring salvation and peace to God’s people and the world.

Rose argues that the traditional translation of zemah as ‘branch’ or ‘shoot’ is mistaken, and is conditioned by erroneous association with Is. 11:1 (where the word does not appear). This has misled interpreters to identify this figure as the natural continuation of the Davidic dynasty contributing to its own future. The real meaning of the word is ‘vegetation’ or ‘growth’ (i.e. plants as a whole); and Jer. 23:5 (where the word does appear) provides the traditio-historical background and an analogous context for understanding Zechariah’s usage: it is not the historical process but only Yahweh’s personal intervention which will bring in the promised rule of ‘Zemah’. Although the word mashiah does not appear in any of these texts, Zemah can be properly described as a ‘messianic’ figure in view of the character of his rule.

Moreover, none of the texts usually cited supports the dyarchic view of supposed prophetic expectation. The crowning of Joshua alone in Zech. 6:11 does not indicate exaltation of the high priesthood to political power but is in symbolic token of Zemah’s future rule, to which the priesthood will serve as a guarantee. The vision of the lampstand and the two olive trees in Zech. 4:11–14 should be taken as symbolic references, not to Zerubbabel and Joshua as human leaders on earth, but more probably to heavenly beings in the divine council. Finally, Hag. 2:20–23 should not be understood as implying the imminent restoration of the monarchy or the inauguration of the messianic age, but as God’s promise of protection to Zerubbabel in a time of political upheaval.

The style of this book is sometimes rather laboured and repetitive; tighter editing and more careful phrasing in places would have helped. The concluding chapter does not really follow through the implications of the findings, which is a pity, given the considerable space devoted throughout to reviewing scholarly positions.

In swimming against the stream, Rose makes a strong and generally persuasive case, though I wondered at times if too diverse a range of linguistic and grammatical arguments was being deployed. His interpretation of these texts is broadly congenial to an older type of Christological reading of the OT (see p. 207), which may not commend it to some readers. It could be usefully read in conjunction with recent works which challenge the critical view that there was a ‘messianological vacuum’ (J. Becker) in periods of OT history, or even that the real locus of messianism is to be found outside the OT or lying in a relecture of the texts.

Horbury’s Jewish Messianism and the Cult of Christ (reviewed in Themelios 25.3) and the Tyndale Fellowship’s own symposium The Lord’s Anointed cover this question on a broader canvas, and this book is a good, detailed complement to this trend.