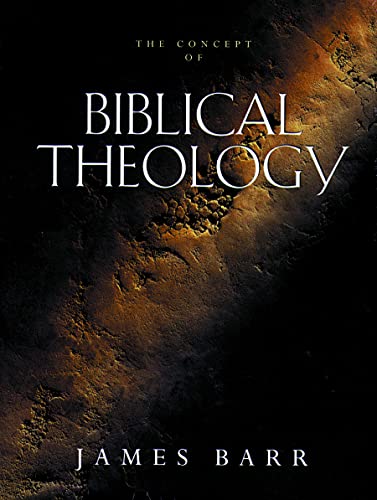 The Concept of Biblical Theology: an Old Testament Perspective

James Barr confesses that he believes that there is such a thing as biblical theology. However this is quite distinct from a (German or perhaps an evangelical, if one thinks, e.g., of David Baker’s work, or the premise of the Dictionary of Biblical Theology) pan-biblical theology. Such an enterprise ignores ‘two sets of times and cultures’. Partly on the basis that most of the OT was written between 650 and 450 BCE) Barr does not see there existing sufficient continuity between the two testaments. So biblical theology is NT theology plus OT theology, a discovering what one of these two things might be is a hard enough task. But the division is convenient for Barr who is much more at home with OT (‘Hebrew biblical’) theology, which, one senses, is in turn the combination of all the strands of ideology which expressed themselves in script and ended up in the canonised Hebrew Bible.

Biblical theology is thus an ‘enlightened’ project which pays attention to the detail of texts, opened up by the modern historico-critical method and which challenges, corrects and even subverts the claims of dogmatics to be speaking from or for the Bible. (Thus Barth and Calvin, and Childs were not sufficiently informed by the Bible.) Biblical theology is the theology or religious Ideology which finds expression in the Bible. ‘The more we insist that the Bible is ‘theological’ in character, the more that same affirmation leads us to look for the theology that motivated it and lived within it in ancient times’. (8) He accepts the distinction made long ago by Gabler: Biblical Theology is the theology of the Bible, while dogmatic/doctrinal is the church’s faith spelled out in its creeds and conciliar statements, or even its church dogmatics, with a normative edge. He confesses that there are three reasons why biblical theology has become popular amongst conservatives: one, as a way to combat the over-technical side of biblical studies, by concentrating on the message, the connections, the convictions; two, as a way of showing how against a ‘(history of) other religions’ background, the faith of Israel and the Church was distinctive; or, three as a more ‘churchy’ corrective to natural theology.

Barr believes that we see in the Bible that which we are disposed to see:

… unquestionably, preferences within modern theology or proposals for religious answers to modern problems have been allowed to influence perceptions of what is ‘there’ in the Bible (16).

Barr then reviews the attempts in the twentieth century, including Eichrodt’s structuring around the theme of covenant and kingdom (which formed a link with the NT) and von Rad’s view that since OT theology includes retelling the history of Israelite faith, it has to have historical shape. For example, a few credal statements are the basis/seed corn of whole of Hexateuch. Rendtorff’s view that the latest block of Revelation is highest is criticised for its Whiggish false consciousness, and for a Hegelian Christianity smuggled in under the guise of ‘progressive revelation’. A passing respectful nod is made to Catholic Biblical theology as practised by W. Harrington. He is condescending towards W. Brueggemann, approving of his sensitivity to ideology in the Bible which needs the clothing of imagination and rhetoric; though he chides him for seeing the Enlightenment as a bogey. He makes the astute comment that nothing ever happens in Brueggemann’s theology.

There is a lot, too much, of the personal animus and arch anecdote. Childs is particularly singled out for his arrogance. Childs is interested in the theology of total text as it stands. The historical context for understanding passages is played down. H. Frei whom Barr sees as having moved in Barthian circles, told Barr that he was glad that the Biblical Theology Movement of the late 50s (which Barr too closely identifies Childs with) failed. To which one can only retort: ‘so what?’. Frei was never one for whom the Bible’s fiction was at the heart of his own theology. One of Barr’s long-laboured theses, dusted down for display here, is that behind Childs stands Barth for whom biblical studies was just about making a collection of exegeses, in order that dogmatics was built on the word of church and proclamation founded on that testimony. Yet for Barth the Bible pointed to Christ, not a Christian biblical view of things, as Childs prefers. Barr has not got out of the old habit of misreading Barth, if not Childs. Of course there must be encouragement for natural theology. The Hebrew Bible is full of it, and, as Hollaz and Schleiermacher observed long ago, the Scripture canon is a means of grace rather than a principium cognoscendi.

In most of the Bible, the theology is not explicit, and when it is, it is ‘theology for its own time’ only, nothing tunelessly authoritative (250). Doctrinal theology escapes canon and is largely historical theology: it looks for the spirit not letter of text (so, David Brown, who emerges as the Great White Hope of English liberal theology), or to re-word Ebeling, church history as the history of eisegesis. Childs’ biblical theology, in its aim to affirm sola scripture, mistakenly tried to freeze revelation at one point in history—the point when the Bible stopped having any material change to it. Through imaginative interpretation, the Bible is made to serve each time.

Barr’s familiarity of the best in German as well as Anglo-Saxon is where the book is most useful. He introduces the work of F. Mildenberger who tends to be selective of passages, but who at least tries to build a bridge between biblical and dogmatic theology. Assuming that theologia means ‘God’, Trinity, rational creatures, providence, the beatific vision, and oikonomia means ‘the restoration of reality by God’ [in creation and re-creation] ‘the basic questions of dogmatic theologia should find their answers in the biblical oikonomia (the restoration of), while conversely the questions of dogmatic oikonomia must find their answer in the biblical theologia’.

Despite some notable omissions (e.g., the works of H-D Preuss, N. Lohfink and H. Hübner) we have in this thick volume a full and rich annotated bibliography. Its purpose? To show that biblical theology is not various things others claim it to be. There is very little constructive here. The reviewer is left with the impression that, for Barr, it is not all that worth getting excited about.