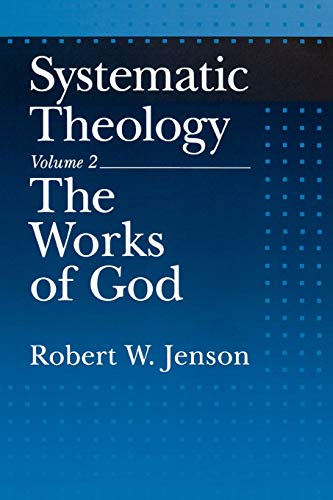 Robert Jenson, Senior Scholar for Research at the Centre of Theological Inquiry, Princeton; Associate Director of the Centre for Catholic and Evangelical Theology and former Professor of Religion at St. Olaf College has produced an extremely readable and stimulating systematics. Many things may be said of Jenson’s work, and some will be mentioned here, but boring is certainly not one of them. Jenson forces his readers to think and makes it a pleasure to do so.

Jenson covers a great deal of landscape in The Works of God and though his breadth of learning is everywhere present it is not pretentious. The central issues are presented and discussed without the need for lengthy footnotes or meandering asides. Jenson moves between ecclesial traditions and academic disciplines with both ease and clarity and does so in such a way that the issue under consideration is illumined rather than obscured. Though a Lutheran by confession, his work here both draws from and is directed toward the church as a whole.

The level of integration between the two volumes is impressive. Conclusions fought for and established in The Triune God serve as the basis for the shape and development of those taken up in The Works of Godmaking this a thoroughly Trinitarian work. However, such tight integration also mean that mistakes made in the former volume appear again in the latter, albeit in different and perhaps more obvious forms.

As for content, The Works of God is concerned particularly with God’s activity ad extra; those works directed toward a reality other than himself, and as such the doctrines of creation, the creatures, the church and the final Kingdom.

In a review of this length it will be impossible to do justice to most, if not all of Jenson’s arguments, due to the strengths mentioned above. Longer and more critical reviews are available for those interested and the two volumes, in this reviewer’s opinion, are worth the rather lofty price tag simply as an example of how theology should be written. But there are many other things we have to learn from Robert Jenson. I highlight two areas in particular for special attention and even concern.

In the former category would be Jenson’s overall treatment in Part V of ‘The Creatures’ with three chapters devoted to human persons in particular, one to ‘The Other Creatures’ (a discussion of heaven, angels and the Devil), one to sin and a closing discussion of ‘God’s Speech in Creation’. Jenson’s linking of human sexuality, politics and social ethics in chapter nineteen (entitled ‘Politics and Sex’) is a fine example of the way in which Jenson grounds the creaturely and social aspects of our created being in the triune life of God—a great strength of his work and perhaps its most valuable quality.

However, Jenson’s strength in this regard also gives rise to concern, for the overall manner in which he construes God’s relationship to the world seems to soften the distinction between Creator and creature, perhaps binding the former to the latter in a way that would compromise the freedom of each. As mentioned earlier, this may be traceable back to Jenson’s understanding of the relationship between the immanent and economic Trinity; a distinction which Jenson feels is necessary as a witness to the freedom of God, but is nevertheless hypothetical and provisional in nature. Jenson’s conclusions here necessarily exert influence upon his development of the doctrines of creation, the church and the final Kingdom in particular.

Those who invest time in these two volumes will walk away pleasantly challenged and perhaps even persuaded, for in Robert Jenson the church has a most creative and thoughtful advocate.