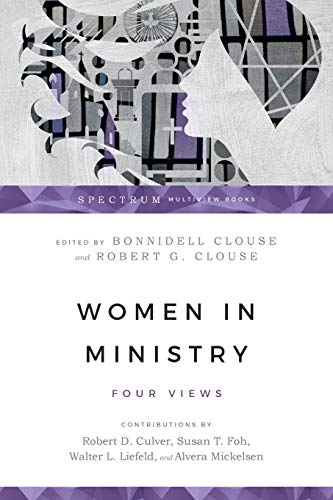 ‘Those who follow Jesus Christ must seek to understand his will in relation to women’s rights. Beyond the need to come to terms with the times, however, is the requirement that Christians deal justly with others regardless of race, social class or gender.’ With those words Robert G. Clouse concludes his introduction to Women in Ministry: Four Views. The four-way debate that follows lays out virtually all the issues Christians need to consider in coming to understand the will of Jesus Christ concerning women in ministry.

This book works remarkably well. The four debaters represent distinct positions on a continuum running from a traditional view (‘Let your women keep silence’) to an egalitarian view (‘There is neither male nor female in Christ’). While arguments for each of the four views weave in and out of the essays and responses in what sometimes appears to be a haphazard way, the end result is a comprehensive overview of the relevant issues.

Following Robert Clouse’s introductory look at historical views of women in ministry, Robert D. Culver leads off with ‘A Traditional View: Let Your Women Keep Silence’. The inviolability of tradition controls Culver’s approach: ‘tradition … is something precious, instituted by authority which has been delivered over for safekeeping, not to be changed or tampered with’ (p. 26). This leads him to stick (laudably) to sometimes anachronistic interpretations of his chosen texts, i.e. lobbying for long hair for women as well as their wearing hats at worship services.

The second major essay, by Susan T. Foh, presents ‘A Male Leadership View: The Head of the Woman is the Man’. Setting up a hermeneutical di-polarity as her starting point, Foh attacks those who give consideration to the cultural, historical and geographical context of biblical material as ‘relativizing the biblical commands to women’. Not surprisingly, both Liefeld and Mickelsen attack her ‘oversimplified and unfair assumptions’.

Foh concludes that women are barred only from the office of elder with its ‘authority over human souls’. Her arguments at times have a legalistic flavour. For example, a female missionary may teach a sermon to a male national who in turn will preach it to the congregation, but she cannot directly address that congregation authoritatively (pp. 98–100).

In the third essay Walter Liefeld presents ‘A Plural Ministry View: Your Sons and Your Daughters Shall Prophesy’. Liefeld, a master at raising the thought-provoking question, examines two basic questions: how gender affects ministry, and how the nature of ministry affects women’s roles. These lead to other questions—about inherent differences between men and women that could render one capable of ministry and the other not, about the order of creation, how the fall affects women’s suitability for ministry, how redemption in Christ affects the consequences of the fall, what we make of actual instances of ministering women in the NT records and, ultimately, what ordination means in terms of spiritual gifts, preaching, teaching, authority and servanthood. He concludes that because the main biblical characteristic of ministry is service rather than authority, none of the relevant biblical texts hinders women from the normal ministries.

The fourth and final essay is ‘An Egalitarian View: There is Neither Male Nor Female in Christ’, by Alvera Mickelsen. She poses as the basic question, ‘Are restricted roles for men and women in church, family and society God-ordained, or are they the result of sin and/or cultural influences?’ (p. 173). Assuming that such restrictions are the result of sin and/or cultural influences, Mickelsen locates her hermeneutical approach in Genesis 1–3, in Jesus’ purpose and ministry to men and women, and the Romans 16 women. From these she concludes that restrictions placed on the full exercise of women’s spiritual gifts are not textually supportable.

As the ink dries on the last rebuttal to these four essays, Bonnidell Clouse concludes with a summary of ‘the four scaffolds’ constructed by the essayists, and then takes a helpful look at what is happening in churches today.

No evangelical spokesperson can be heard or taken seriously without engaging the traditional arguments supporting gender role hierarchy. At the same time, it is not enough to restate these arguments without engaging with equal seriousness the exegetical and hermeneutical work carried on in recent years, the results of which go a long way to support egalitarian role relationships in the church. It turns out in this debate that Liefeld and Mickelsen have been able to work with traditional arguments more convincingly than Culver and Foh engage egalitarian arguments.

Culver loses credibility with a patronizing tone and his refusal to engage seriously are points raised by other essayists. He assumes too much and dismisses without critical reflection any idea that challenges his assumptions.

Foh has carved out a niche in the discussion that leaves her vulnerable to assault from both sides. In attempting to distinguish her position from Culver’s absolute hierarchism and from Liefeld’s and Mickelsen’s more egalitarian emphases, she ends up sounding like a hair-splitter. But she takes the questions seriously and grapples with them within her hermeneutical framework.

Liefeld continues to raise the tantalizing questions that force an examination of the assumptions behind the traditional view. With Liefeld, however, it is sometimes clearer where he does NOT stand than where he does stand. What precisely does a ‘plural ministry’ model look like?

Mickelsen marshals the major arguments for an egalitarian position without falling into the ditch of a defensive posture. Instead, she finds a way to respond to the standard arguments supporting hierarchy while also moving the debate through a clear statement of biblical texts supporting her thesis.

Is the book worth reading? Yes. In it hardly a stone in the current debate is left unturned. Proponents of four distinct views have equal opportunity to make their case. Anyone interested in questions touching women in ministry will welcome this lively, balanced debate.