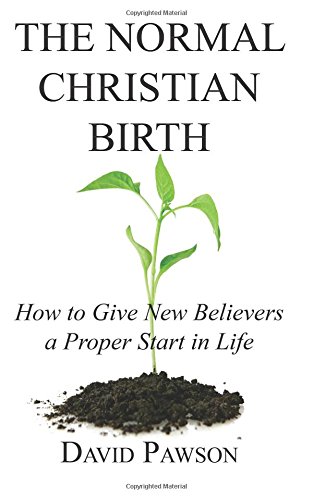 This is an important book with profound implications. David Pawson, a well-known British preacher, is concerned about ‘how to give new believers a proper start in life’, as the cover puts it. He follows a number of recent scholarly works in seeking to ‘integrate sacramental or Pentecostal insights with the traditional evangelical outlook’ on Christian initiation (p. 4) and comes up with his own distinctive blend.

Pawson’s basic thesis is simple. ‘In a nutshell, I believe that the “normal Christian birth” consists of true repentance and genuine faith, expressed and effected in water-baptism, with a conscious reception of the person of the Spirit with power’ (p. 5). ‘Christian initiation is a complex of four elements—repenting towards God, believing in the Lord Jesus, being baptised in water and receiving the Holy Spirit’ (p. 11). These are quite distinct from one another and are all essential to entering the kingdom of God. They may occur very close together or over a period of time, but what matters is that they all happen, not that they happen together. These four elements are found in the conversion accounts in Acts, though all four are not mentioned on every occasion. They are also found in Hebrews 6:1–2. The author takes great care to give weight to all four elements, but his essential evangelical (not to say biblical) stance is clear when he affirms that ‘faith is the most fundamental of the four elements and actually underlies the other three’ (p. 13). He does not, however, use this as an excuse to relativize the others, as do so many evangelicals.

The order of the events is normally as stated above, but not necessarily so, as is seen from Acts 10:44–48 and as happens today with the confusion of teaching on this subject. The timing of the process is clearly of secondary importance to the author and he does not seem to be unduly concerned that it might take years. On the other hand, he does seem to recognize that they form an essential theological unity.

On baptism Pawson boldly contends for the biblical teaching that it is instrumental and not merely symbolic, in opposition to the Zwinglianism of so much evangelical teaching. He observes that the latter position arises from a ‘Greek’ inability to relate the physical to the spiritual. A sacrament he defines as ‘a physical event with a spiritual effect’ (p. 46), although this is not to be understood in a magical way.

Receiving the Spirit will normally follow baptism and in Acts usually happens through the laying-on of hands. This ‘Spirit-baptism’ is not a ‘second blessing’ after regeneration, as in Pentecostal teaching, but is part of the initial process of becoming a Christian. And yet the author repeatedly argues that it is possible to believe without receiving the Spirit. Thus there can be genuine believers who have not yet received the Spirit. Clearly he himself believes that there are many such for he argues from Acts especially, that one cannot receive the Spirit without this being an observable and indeed audible event. He rules out the possibility of the believer having received the Spirit without being aware of it at the time.

Conversion and regeneration are terms which cover the whole initiation process, emphasizing our activity and God’s respectively. Regeneration is in the NT associated with baptism especially.

The layout of the book is very helpful. In the first part the above ideas are set out in a systematic fashion. In the second part, about half of the book, twenty-four passages, from Matthew 28:19f. to Revelation 3:20, are expounded in the light of the thesis. In the final chapter the pastoral implications are explored. Most valuable here is chapter 31 where the traditional evangelical ‘prayer of commitment’ is subjected to judicious and devastating criticism.

This is an important and valuable book which deserves to be read widely and studied carefully. There is much in it with which the reviewer is in full agreement. The fourfold nature of initiation is a salutary call back from evangelical reductionism to the fullness of NT teaching. Pawson’s ‘four spiritual doors’, as he calls them, are far more biblical than their well-known counterpart. Conversion is a process which need not always be instantaneous. Baptism is a part of this process and is more than a symbol. The reception of the Spirit is also a part of the process and should not be ‘left to chance’.

While being in broad agreement with the author’s thesis, I am not happy about all the details. In particular, I am not persuaded that the initial reception of the Spirit must always be observable and audible. Unless I have missed something, his evidence is simply the recorded instances where this happened (mainly in Acts) plus an appeal to Mark 16:17f. This is clearly a vital issue of major pastoral import, since Pawson’s position means that the majority of evangelical Christians have not yet been fully initiated.

The exegesis of individual passages is inevitably controversial in places and will not persuade every reader. I found the exegesis of Romans 8:9 and 1 Corinthians 12:13 particularly unconvincing. With the former passage there is some muddled thinking. The author denies that if ‘anyone not having the Spirit is not a Christian’, it follows that ‘anyone who is a Christian must have the Spirit’. This denial of basic logic is achieved by placing between the two statements another statement that indeed does not follow from the first, thus masking the fact that the second statement quoted above most certainly does follow from the first. Pawson’s argument is that Romans 8:9 should read, ‘If anyone does not have the Spirit of Christ he does not belong to the Spirit’. This unusual interpretation I did not find convincing. Again, he argues that 1 Corinthians 12:13 means that Spirit baptism brings us not into the body but right into or further into the body. These two examples are not, however, typical and his exegesis is generally sober and competent.

One more serious fault must be mentioned, especially as the reviewer is a student of Calvin. It is stated that Calvin at one time questioned infant baptism and he is quoted to the effect that faith should always precede baptism (p. 315). In fact the quotation continues: ‘On this pretence, the Anabaptists have stormed greatly against infant baptism. But the reply is not difficult.…’ As the author elsewhere affirms of others, a text without a context makes a pretext. To be fair, at this point Pawson is drawing on another, less reputable, author, but that is still no excuse for not checking such a controversial quotation from Calvin. Again he states that there are only four pages on the Holy Spirit in Calvin’s Institutes (p. 318), a remarkable statement about one who has been called ‘the theologian of the Holy Spirit’ and who brings the Holy Spirit into doctrine after doctrine in a way that was unusual before the modern period.

In conclusion, an important and stimulating book which is warmly commended for serious consideration.