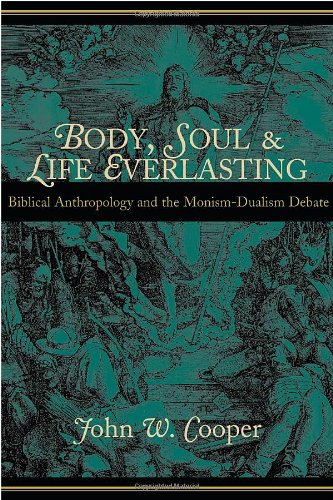 John Cooper has written an excellent book on the important topic of what a person is and what happens to her after death. He says that he has attempted to organize and present his material ‘in a way which is both popularly accessible and academically sound’ (p. 6). He has certainly succeeded at doing this. The book does not require a knowledge of Hebrew and Greek and will be useful to any reader interested in the subject.

Cooper argues for what he calls ‘holistic dualism’. This is the view that a person is a soul which is distinct from its physical body. Though distinct from its physical body, a soul is functionally unified with its body in this life and exists and functions disembodied between death and the future resurrection. Cooper emphasizes that dualism has been the position advocated by the Christian church from earliest times. Moreover, he points out that to give up dualism is both to abandon a plank in the platform of orthodoxy and to undermine the belief of virtually all ordinary Christians.

The non-dualist view to which many contemporary scholars have given allegiance is ‘monism’, the view that a person is a psychophysical unit which has both mental and bodily aspects, but no distinct and separable soul. Cooper discusses various considerations which have led these scholars to reject dualism and endorse monism, the most important of which are arguments from contemporary philosophy, the advance of science, and Christian theology and biblical scholarship themselves. He believes that none of these provides a good reason to reject dualism, and explains why in varying degrees of detail. Most of his effort is directed at answering objections to dualism from theology and biblical scholarship, and it is here that I believe Cooper engages his reader the most.

Cooper points out that primitive peoples were dualist in their beliefs and that the ordinary person or person-on-the-street is dualistic in her thinking (pp. 74, 178, 197). Thus, the standard criticism against dualism by monists, which is that any dualism present in the Scriptures is Hellenistic or Platonic in origin, is just false (e.g. pp. 94–95). While Plato was a dualist, he did not invent dualism but rather philosophized about a view universally held by the ordinary person. The Hebrew mind, being the mind of an ordinary human being, has, therefore, a dualist’s conception of human nature (p. 197). It has this conception, but we must not conclude from this that the writers of Scripture developed a philosophical anthropology that is dualist in character. The writers of Scripture did not develop an anthropology (pp. 106, 178–179, 197). Their purpose in writing was, at least in the case of the NT authors, to proclaim the gospel, and they did so in terms of the prephilosophical world-view of their audience, the ordinary human being (pp. 112, 121). The writers of Scripture, not having a philosophical agenda, used ordinary language. Therefore little, if any, weight can be placed on how a biblical writer uses this or that word. Even dualists can speak of a person as if she is, in the whole or in part, identical with her body. But this does not provide evidence for the truth of monism (pp. 113–114). The authors of Scripture wrote in ordinary language because they did not need to make strict and philosophical distinctions to accomplish their objective.

According to Cooper, the dualist outlook of the ordinary person is clearly present when the writers of Scripture conceptualize the afterlife (chapters Two and Three). For example, the OT authors believed in a region called Sheol where the deceased go at death. The existence of Sheol in biblical thought demonstrates not only that the OT writers believed that a person is distinct from her physical body but also that they believed that she can be separated from it and continue to exist. While existence in Sheol might not be as ‘full’ as life on earth (e.g. souls in Sheol are often presented as being lethargic and inactive), it is a form of genuine existence nonetheless.

The intertestamental and NT periods continue the dualistic outlook towards the afterlife and develop more clearly the idea of a future resurrection at which the righteous and unrighteous will be separated and receive their just rewards (chapters Four to Seven). The person is viewed as continuing to exist in the time between death and resurrection (the intermediate state). Even those scholars who argue for an immediate resurrection of the person at her death must, to remain consistent, endorse dualism, for the person who loses her first body at death must be the numerically same entity which acquires her new body at her resurrection (pp. 181–183).

I have only outlined the major points of Cooper’s work. There is much detailed argument provided to support the points I have summarized. In addition, there is a very nice discussion of what the soul which survives in the intermediate state might be like (pp. 219–222). Cooper points out that the non-philosophical mind conceives of it as an ethereal, spatial body while the philosophical mind regards it as an unextended, non-spatial mind. How these notions are to be reconciled is a question Cooper believes requires additional work to answer.

I am in sympathy with Cooper’s general points. In closing, I would like to record two areas in which one might disagree with Cooper. I say ‘might disagree’ because I am not clear about what Cooper’s positions are on these issues and, therefore, for all I know, there might be no point of disagreement.

First, it is plausible to maintain that one believes in dualism because of what one knows before one ever reads Scripture. One does not believe in dualism because it is the view implied or presupposed by Scripture (pp. 113, 197). Cooper might take the opposite view. For example, he favourably discusses Christians who are committed to holistic dualism because they believe it is the anthropology entailed by Scripture (p. 252). Also, he mentions how traditional Christian Platonists all along tracked the right view (dualism) in the OT, even if they did so for the wrong reason, namely, philosophical prejudice rather than OT erudition (p. 76). Contrary to the view suggested by these remarks, it is reasonable to maintain that one is initially committed to dualism and then finds Scripture plausible because it expresses one’s pre-scriptural dualist view.

Second, given both that the ordinary human mind is dualistic in its view of the self and that the biblical writers are writing as and to ordinary human beings, the burden of proof is on the person who would argue that Scripture is not dualistic in its outlook. At one point, Cooper talks about the burden of proof remaining on the dualist (which suggests it was there from the outset) and the dualist having to work hard to vindicate his claim to truth (p. 110; yet cf. p. 123). But if Cooper is right about dualism being commonsense in nature and Scripture according with commonsense, it would seem that it is the opponent of dualism, i.e. the monist, who has to do the hard work.