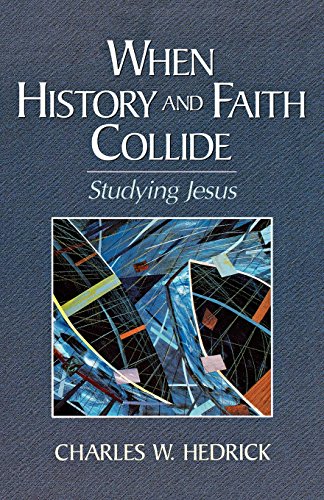 Hedrick provides a user friendly elementary introduction from a moderate critical perspective to the study of the historical Jesus and the sources for such a quest. Its purpose is to ‘help beginning students to appreciate the gap [between the Jewish man and the Christian Lord] and to invite them to engage for themselves a discussion that has been taking place, out of the public eye. for some two hundred and fifty years’. The promise held out to the reader is as follows: ‘a more mature faith … out of challenging an earlier faith that has never struggled with the issues discussed in this book’.

The first chapter surveys the delicate relationship between faith and history and the various solutions proposed. This is followed by a short survey of the various quests for the historical Jesus in the twentieth century. The third chapter gives perceptive summaries of the portrait of Jesus in each gospel. This is followed by a study of the diversity between the narrative of the Synoptic Gospels and John’s Gospel and of the similarities and differences among the Synoptics. Chapter 5 attempts to account for this diversity and the similarities. Further chapters raise the question of a lost sayings gospel (i.e. the hypothetical source Q), trace the development from oral traditions to a written gospel and discuss the relationship between early Christian prophets and the Jesus tradition. The last chapter outlines the criteria for ‘Searching for Jesus among the Christs of Early Christian Faiths’ (i.e. the standard criteria for determining the originality of Jesus’ sayings). Each chapter concludes with a list of recommended reading and helpful questions for study and discussion. Notes and indexes of modern authors and references round off the volume.

Throughout Hedrick offers a sensitive, though often one-sided, treatment of the major issues that are involved in the study of the historical Jesus. Even though Hedrick may not like it, those who stress the continuity between the Jesus of history and the orthodox Jesus of Christian faith do so with good, scholarly reasons. Hedrick all too quickly dismisses attempts of harmonisation between the canonical Gospels. Other than one note, with reference to J.A.T. Robinson, Hedrick does not mention that a good number of scholars are ready to date one or more Gospels before 70 AD, even in the fifties and sixties of the first century and thus far closer to the historical Jesus. Likewise only few scholars would evaluate the Gospel of Thomas as highly as Hedrick and place it side by side with the canonical gospels (‘roughly contemporary with the composition and final standardisation of the canonical gospels themselves’). Several scholars have argued persuasively that the memorisation techniques current in contemporary Palestinian Judaism were also applied in the preservation of the Jesus tradition and thus suggest a high historical reliability of the tradition. Hedrick only considers a literary solution for the similarity between the Gospels. Like many studies of the historical Jesus and the corresponding methodological approaches, Hedrick focuses almost exclusively on the words of Jesus. His deeds and actions (including those that are miraculous and/or programmatic for his mission) are neglected.

For a more balanced appreciation of all the issues of the study of the historical Jesus Hedrick’s volume should be supplemented by J. van Bruggen’s excellent study of the same subject (Christ on Earth: The Gospel Narratives as History) and the older studies by C. Blomberg, The Historical Reliability of the Gospelsand I. H. Marshall, I Believe in the Historical Jesus.