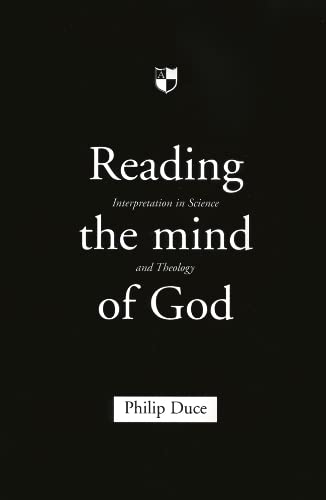 Reading the Mind of God. Interpretation in Science and Theology

Reading the Mind of God takes as its basic framework Francis Bacon’s metaphor of ‘the two books’, God’s Word (Scripture) and God’s works (the created order), and sets out to explore ways in which the interpretive approaches appropriate to each may interact fruitfully, rather than being deadlocked in tired old ‘science versus faith’ debates. Duce’s work, a revision of his MTh thesis at London Bible College, moves comfortably and confidently beyond the basic caricature of scientific method as objective fact to which the only Christian responses are either capitulation or stubborn ‘biblical literalism’. His background as a research chemist allows him to play a strong ‘insider’s’ hand on the scientific side of the debate, and he surveys a wide variety of the literature on Christianity-science issues.

Part 1 sets out basic accounts of how the two ‘books’ are read. Duce is particularly helpful on the philosophy of science, charting a variety of emphases away from Bacon’s own ‘pure’ idea of logical induction from observed data. He looks at the work of Thomas Kuhn on paradigm shifts; positivism; Popper’s ‘falsification’ approach, and ‘critical’ realism. This is followed by a survey of aspects of hermeneutics: biblical interpretation seen through the grid of traditional, modern and evangelical approaches. I would be hesitant about recommending this as anything more than the briefest of broad-brushstroke portraits, and it is debatable whether this is enough to sustain Duce’s attempt to develop a self-consciously evangelical position on the science-interpretation issue.

Part 2 explores a variety of models for ‘integrating’ the readings. Duce prefers ‘dialogue’ approaches to conflict, independence or integration models (ch. 4) and develops an eclectic dialogue model, recognising correctly, that biblical interpretation occupies at times distinct and at times overlapping discourses to the concerns of science (ch. 5). ‘Conflict’ between the two approaches is thus not ruled out, and Duce probes, perhaps a little inconclusively, how one might handle the potential of conflict (ch. 6). Although he touches on areas of historicity, naturalistic presuppositions and so forth, he sticks to his declared aim of treating method rather than specific examples, and thus ends only with suggestions about potential approaches. Substantial engagement with at least one example would have helped considerably here.

Part 3 essentially revisits aspects of the earlier arguments in more detail. Baconian and Kuhnian perspectives in the two ‘readings’ are discussed under the helpul rubric of ‘methodological similarities and differences’, leading to the conclusion that appropriate overall models of epistemology should be broadly based enough to allow for both science and hermeneutics to make their home rather than prejudging in favour of one of them (ch. 7). Michael Polanyi’s philosophy of personal knowledge is then explored briefly as an example of such an approach (ch. 8). Duce seems to support Polanyi’s ‘fallibilist’ realism as a preferred option.

I appreciated the wide range of options presented in this book and especially the successful attempt to re-orient the science-faith issue away from debates about creationism and set it on a broader canvas. Duce’s reservations about the popular ‘complementarity’ approach, where the two domains complement, but do not contradict each other (63–69) is carefully balanced to show the merits of the approach while still concluding that it is too serene about the possibility of avoiding uncomfortable contradictions in this area.

However, while Duce’s position may be worth exploring, I am not convinced that he has successfully defended it in this book. Firstly, the whole book is littered with references to secondary sources to structure the discussion, and these are very often such sources as theological dictionary articles or textbook summaries. The decision not to interact with primary sources is seriously flawed. Secondary summaries frequently resort to that dreadful device of so much contemporary academia: classifying and labelling positions. In a book concerned with hermeneutics this is especially inappropriate. Secondly, Duce sometimes seems to think that a point has been demonstrated by citing authors who believe it. Thus ‘No final conflict!’ declares Francis Schaeffer (79) and on the next page we are apparently committed to this ‘basic principle’. Maybe so, but why? Likewise I hunted high and low for any reason as to why inerrancy was required of me, rather than say the view of John Goldingay (82 n. 18) which is summarised but left unevaluated, but all I could find was that a lot of ICBI members all believe it. Right or wrong, this demonstrates nothing. Duce is sharp on this when scientists do it (77), but doesn’t seem to spot himself doing it. Perhaps the book is only aimed at those for whom inerrancy is a prerequisite of being ‘evangelical’, although in general I didn’t get that impression, but in that case I think that Duce should at least clarify how a Polanyian hermeneutic which has served Colin Gunton, Lesslie Newbigin and others so well, could possibly at the same time support inerrancy. No indication is given that this is even thought to be an issue.

Thirdly, the decision not to engage with even a single example is disappointing. Thus abstracted, all the talk of hermeneutical complexity and nuanced spirals of engagement is just so much idling language.

And finally, a doctrine of Scripture which requires us to say that the Bible is always right even if interpretations of it are always wrong (e.g. 76) is at the very least hermeneutically simplistic. What, one wonders, would Polanyi make of it?

It is possible that Duce could address all these issues and thus make a much more compelling case. In the meantime this book stands as a useful first step into thinking about interpretation in science and in theology, although one which falls short of defending all the interesting views it puts forward.