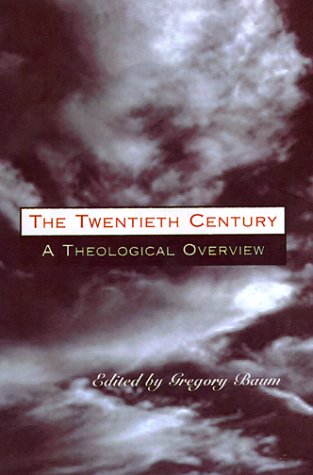 The Twentieth Century, A Theological Overview

This collection could have been subtitled. ‘A North American Perspective’ for that is arguably what it delivers. However, although it has a North American Catholic flavour it draws upon the skills of several non-Romans too, such that its central concerns are by no means denominationally partisan even if their geographical purview is in places.

The essays fall into two groups: the first moves from historical events that have marked the twentieth century to theological reflections upon those events. The second group starts from a contemporary theological basis and proceeds to a critique of major movements that have shaped the contours of much twentieth century theology. Both sections have their strengths. In the first group there is material on both World Wars (including the Holocaust), and on political movements and their social ramifications such as the early Bolshevism of the Russian Revolution and the state of Welfare Capitalism mid-century. There is also a (disappointing) essay on the advent of globalisation as a world phenomenon. Several instructive chapters on the development of Roman Catholic theology, from the early days of the century in the aftermath of Vatican I and its hostility towards ‘Modernism’, are also worth noting. They chart the developments in mid-century, dealing with several theologians whose work is more remote from Anglo-Saxon Protestantism, such as Jaques Maritain and Henri de Lubac.

The second set of essays echoes some of the same concerns but from the opposite direction. The ecumenical movement and the Impact of Vatican II are both dealt with sympathetically, and the impact of Marxist ideas on Christian thought take up the political aspects of the first half of the book. Here too are other developments in more recent theology. Of particular note among these are the essays on Postmodernism, the Ecological problem and Feminism, all of which continue to excite varying degrees of interest as the twentieth century wanes. Moreover, Harvey Cox’s treatment of the rise and fall of secularisation is an interesting comment on the development of his own thought.

In any such collection, it is often as instructive to note what has been omitted as to read what has been included (something which Baum acknowledges in the introduction). It is perhaps understandable that some theologians/movements are absent—for this is not a theological overview which seeks to chart the theological developments of the century, as much as a series of reflections upon movements and events which have shaped the history of the period. So for example, there is no serious treatment of Pannenberg’s thought, nor is Moltmann dealt with adequately. But it is less excusable if such an assessment fails to deal with movements which have been spawned as a direct response to the socio-political and cultural changes which the volume seeks to address, as with religious fundamentalism, and Charismatic/Renewal theology. Neither of these gets a fair hearing, yet they have played an important role in shaping recent theological reflection.

Furthermore, although there is mention made of various thinkers whose work has made an impact upon society and theology, such as Heidegger, or Marx, there is no mention of, for example, Wittgenstein, or Existentialism. Nor is there any attempt to interact with the Natural Sciences, or with the technologies it has spawned. Finally, there is scant attention to cultural factors like religious pluralism and the rise of non-western spirituality, all of which is curious to say the least, given the brief the editor has set himself.

Nevertheless, many of the essays are well worth reading, particularly for those with interests in recent Historical Theology, Church History and the Sociology of Religion. But as a truly representative theological overview of the twentieth century, it is somewhat lacking.