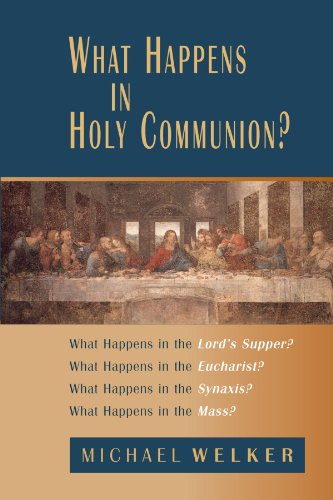 WHAT HAPPENS IN HOLY COMMUNION?

Michael Welker is Professor of Systematic Theology at the University of Heidelberg, Germany, and is co-editor of ‘Toward the Future of Reformed Theology’. As his book clearly reveals he is wholly committed to an ecumenical approach to the Holy Communion, while being fully conscious of the historical conflicts surrounding the sacrament, and equally sensitive to different traditions and cultural influences. He calls for an approach which is properly Biblical edging out misplaced concentrations. Having begun to spell all this out in a rather lengthy introduction of twenty-five pages he embarks on the main body of the book of twelve chapters, each one headed by an apt quotation in order of sequence from the words of institution.

Every chapter begins with the question, ‘What happens in Holy Communion?’, which is followed by an answer of one or two sentences relative to the heading. The answer is then expounded throughout the chapter of a dozen pages or so, concluding with a summary of the exposition under the heading ‘Results’.

The chapters are gathered under three subdivisions of the book. Part 1 deals with that aspect of the Holy Communion in which human beings thank God, and celebrate a community meal in a jeopardised world. Part 2 deals with the presence of Jesus Christ in the sacrament, while Part 3 deals with the Holy Communion as the feast of the church of all times and in all places in the world. This, as one would expect from Welker, is the ecumenical church made up of all churches, pre-Reformation and Reformation. All contribute their own different emphases and are to learn from one another to be firmly grounded on Scripture.

Welker argues: Holy Communion must always be seen as a fellowship meal. Though derived from the Passover and the Jewish weekly meal it was in its institution as the Lord’s Supper, unique. It is to be celebrated not less than once a year and not more than once a day. It is not only a eucharist—a thanksgiving to God, but also a mutual acceptance of fellow human beings. Since God accepts to the feast all unconditionally, including Judas Iscariot, Peter, and the sleeping disciples at Gethsemane, it is misused when moral or church disciplinary control is exercised. Participants are to judge themselves that they be not judged by Christ. Holy Communion is a memorial to the pre-crucifixion, crucified, risen and glorified Christ, made alive to the participants by the Holy Spirit. Christ is really present, not in the elements exclusively but in, and through the whole sacrament. It is a meal both for the preservation of the church on its way to eternal life (the pre-reformed emphasis) and for liberation from the power of sin (the reformed emphasis). It is a celebration of the renewal brought about in fellowship with the Triune God.

The value of the book lies in its freshness of approach. Holy Communion in the developing ecumenical church is to be derived from an emphatically biblical orientation. Evangelical readers however may well baulk at some of Welkers’ basic theology, not least at his understanding of Christ’s atoning work as being willing to sacrifice himself but not according to ‘the false understanding of atonement which says that God plans and wills the victimisation of Jesus in order to satisfy the divine need for vengeance and compensation’—is substitutionary atonement under attack?