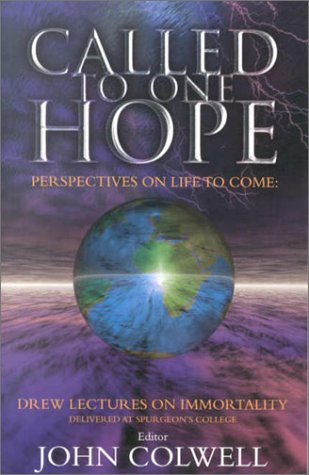 CALLED TO ONE HOPE: PERSPECTIVES ON LIFE TO COME

John Drew, a London Congregationalist, established the annual lecture foundation that lies behind this remarkable book. They were to address immortality, eschatology and life beyond death. Seventeen recent lectures have been compiled in this present volume. Throughout the book there is both great breadth and much overlap. The theological backgrounds of the contributors vary and include both conservative evangelicals and such theologians as James Dunn, Paul Badham and Paul S. Fiddes. This means that the assembled book does not provide a single consistent argument but a range of ideas and reflections.

The book has three sections which divide the lectures into biblical, historical and doctrinal/philosophical perspectives. The first section includes Stephen Travis explaining the doctrine of rewards and Howard Marshall rebutting universalism. N.T Wright unfolds the significance of the resurrection of the body and new creation in contrast to the Platonic heaven of disembodied souls prevalent in much evangelical piety. A brief historical section mines some insights from the Puritan tradition. John Colwell’s essay is particularly helpful in outlining Jonathan Edwards’ response to the case for annihilationism and applying this to its contemporary manifestations in the work of John Stott and John Wenham. The third section is the longest, covering both doctrinal and broader cultural concerns. Bruce Milne engages with the treatment of eschatology in Gutiérrez and Moltmann. Their general distaste for the doctrine of immortality reflects the secular spirit of their age. In response, Milne points out that far from being an embarrassment to systematic theology, the Christian confidence in a life after death ‘is the deepest vindication of the dignity and significance of humanity within God’s world’ (163). Further lectures engage with contemporary literature and philosophy.

Though the contributors do not all share the same theological outlook there is a general thesis that emerges. Christian immortality is not to be seen as intrinsic to human nature but rather as an expression of the love and character of God. Rex Mason makes this point helpfully in his treatment of OT literature. Mason concedes that the concept of a personal resurrection is a developing notion in the OT but he denies that it is an alien or imported idea. He argues that, ‘the concept was born of a long-held conviction in the sovereign power and goodness of God rather than in a sudden blinding light of revelation from Zoroastrianism’ (77). The kind of God the Israelites believed in led naturally to a conviction that the human being would survive physical death.

The variety of perspectives is perhaps best borne out with reference to Paul Badham’s treatment of near death experiences. In marked contrast to most other contributors, Badham is not concerned with exegesis but with recent research into the experiences of those who have recovered from apparent death. A notable proportion (between 10 and 35%) recount vivid, often similar, experiences. Badham’s research leads him to a conclusion out of step with most other Drew lecturers; ‘It seems overwhelmingly likely that reports from past near-death experiences are what have shaped our traditions and provided the content of our religious imagery concerning the future life’ (221). For Badham, religion finds its origins not in revelation or incarnation but in reflection on encounters with death. His thesis is stimulating but at odds with the generally evangelical tenor of the volume.

This book lacks an index, as I bibliography or any biographies of the contributors, though most are well known. However, there are extensive end-notes which provide a useful resource for further reading. This book offers many exciting contributions to Christian reflection on immortality and deserves a wide readership.