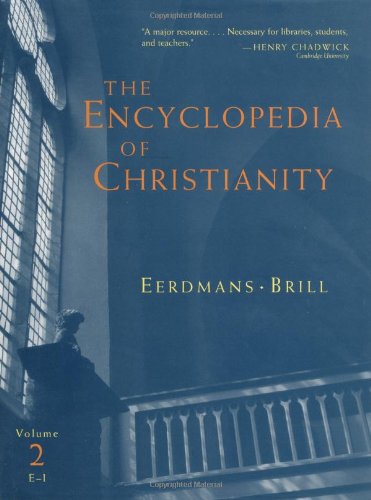 THE ENCYCLOPEDIA OF CHRISTIANITY, VOLUME 2, (E–I)

This is the second part of the five-volume Encyclopedia of Christianity, which will undoubtedly be a major reference work for many years to come. The encyclopedia is a translation of the third revised edition of the German Evangelisches Kirchenlexikon: Internationale Theologische Enzyklopädie, with significant enhancements and additions. Among these are articles on most countries of the world, including former Communist countries which have gained their independence since 1989, the latest statistical information on religious affiliation in each country, seventy additional biographical articles on prominent figures in church history and many expanded or new articles on topics of particular interest to English-speaking readers.

The aim of the encyclopedia is, as the publishers state, to present Christianity in its global context, its ecumenical context, its socio-cultural context and its historical context. A wide range of contributors has been assembled, although given the origin of the work, the majority are German. It is perhaps no coincidence that the entry for Germany runs to 10 pages, whilst France rates a mere 4 pages. A wide cross-section of traditions is represented in both writers and articles.

The coverage of this volume is extensive, including Ebionites, Ecumenical Theology, Elijah, Envy, Ephesians (Epistle to the), Erasmus, Eschatology, Evangelical and Everyday Life (without venturing beyond E). The pattern is the same as in the first volume, with longer articles often divided among several contributors, and the treatment of subjects comprehensive and generally sympathetic. There are inevitably exceptions to this even-handed approach. A useful and wide-ranging article on Evolution commendably notes the recent Intelligent Design movement, but gives it very limited space and (inaccurately) confines its influence to ‘fundamentalist Christian groups’, although many ID advocates would not fit into this stereotype. It is also disappointing that the entries on Evangelical, Evangelical Missions and Evangelical Movement are relatively short, in contrast to those dealing with the Ecumenical Movement and related topics. The bibliographies appended to each entry are generally useful, although some are decidedly quirky. That following a good article on Jonathan Edwards, for example, omits such standard works as those by Conrad Cherry, Robert Jenson, Sang Hyun Lee and Michael McClymond.

It is the articles on biblical subjects and, particularly, biblical books, that will raise the most questions for evangelical readers. Many entries are too short to allow discussion of divergent views. That on Esther does little more than recount the book’s content. Of more concern are the critical views that are regularly expressed without explanation or qualification. The entry on the Epistle to the Ephesians gives no indication that some scholars still hold to Pauline authorship. The entry on Genesis repeats tired documentary hypotheses, as does that on Exodus. The description of the infanticide perpetrated on the Israelites in Egypt is ascribed to the ‘legendary framework’ of Exodus. Evangelicals will look elsewhere for help on these topics, as will readers who simply seek an overview of current opinions.

In spite of these criticisms, there is no doubt that the encyclopedia will be an indispensable reference work for a long time to come. The statistics in the articles on individual countries will of course date rapidly, and some are no doubt already out of date. Nevertheless the usefulness even of these articles will remain substantially undiminished. Libraries, well-off students and fortunate reviewers will certainly want to have a copy of each volume.