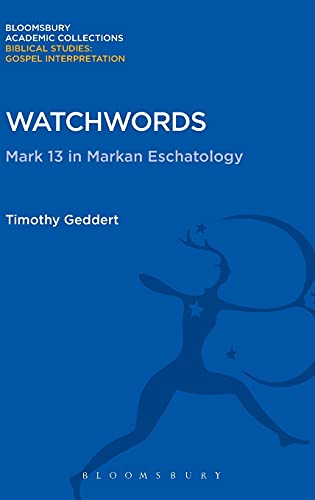 This is a well-written and attractively argued study of Mark’s gospel which began life as a PhD thesis at Aberdeen University. Mark 13 has attracted the attention of many scholars in the past, but Geddert breaks new ground by the way he seeks to read the chapter in the whole context of Mark’s gospel; his thesis is a good example of responsible redaction criticism.

His method is to see how various of the themes that are important in Mark 13 are used elsewhere in Mark’s gospel, and to reflect on what this usage suggests for the interpretation of Mark 13. He begins by looking at ‘signs’ in Mark, arguing that the evangelist is quite negative towards signs; Mark 13 should thus not be seen as providing signs to the disciples. Geddert argues that Jesus does offer objective proofs of his authority in 2:1–3:6, but this gives way after 3:6 to secrecy on Jesus’ part, a secrecy that goes on even after the resurrection and that the disciple (and the reader of Mark’s gospel) is invited to penetrate. Geddert goes on to look at Mark’s use of the verbs blepein, a word used by the evangelist to refer to the discernment that Jesus looks for, and gregorein, a word used to describe the faithful ‘watching’ of Jesus in his passion and the faithful watching of his followers in the last days (Geddert sees the links between Mark 13 and the Markan passion story as highly significant, the passion being the pattern for Christian discipleship). The author moves on to look at Mark’s view of the temple: Jesus predicts the destruction of the temple because of the corruption of the temple authorities, who have robbed God, and its replacement with himself (Jesus) and his church. In his chapter on suffering in Mark, Geddert’s major thesis is that Mark presents a ‘passion paradigm’ according to which the suffering faithful pass on the baton of faith to the next runners: John the Baptist to Jesus, Jesus to the disciples, the disciples to their successors (so Mk. 13). Geddert has a particularly interesting interpretation of 16:7: going to Galilee is not simply a geographical journey, but it is for the disciples picking up the baton from Jesus and starting the journey that Jesus travelled from Galilee to his Jerusalem passion. Geddert goes on to explain that ‘Mark … wrote much of his Gospel on two levels at once, narrating a sequence of historical events and at the same time and with the same words, instructing readers in discernment and discipleship’. In his view Mark 13 can in a real sense be seen as the ending of Mark’s gospel, because, if the gospel is first read as a description of Jesus’ life, we are then directed back (16:7) to read it again as a description of our life as disciples, this being directly described in chapter 13. In his last two chapters Geddert looks at Mark 13 itself, arguing that the destruction of the temple is to be seen as part of the secret working-out of God’s kingdom-purpose in Jesus, and then turning to the most controversial question of all—the question of what Mark 13 teaches about the time of the end—and contending that Mark is deliberately ambiguous. Mark does not know if the end will be soon or not, and so he does not make it clear whether ‘all these things’ in 13:30 include the end or not. Here as elsewhere Geddert makes a virtue of scholarly disagreement, and maintains that Mark meant to be obscure, following Jesus’ own secretive teaching method. Conservative scholars have often argued that Mark 13:30 is not a mistaken prophecy of a near end, but their arguments have sometimes seemed special pleading; Geddert argues his view in a persuasive and scholarly way.

The book is full of good observations—e.g. the observation that suffering for Mark is not a depressing thing, but a path to glory—and useful arguments—e.g. his refutation of the interpretation of 16:7 as a reference to the parousia. Geddert’s major theses are attractive, e.g. his suggestion that Mark is doing two things at once: telling us about Jesus and about discipleship. I wondered on quite a number of occasions whether he (like most redaction critics) is over-subtle in his interpretations (e.g. is the widow of 12:41–44 partly a symbol of Jerusalem and its religious leaders, to be contrasted with the woman of 14:3–9? Is the faithful doorkeeper of 13:34 meant to remind us of Jesus at his passion? Is 16:8 meant to show that disciples can fail? etc.). I am sure that Mark was a theologian, but was he as consciously ingenious a literary artist as Geddert thinks? It is possible that some of the features of the story that are supposedly significant reflections of Mark’s own particular theology may simply be the way the evangelist received the story from his sources or informants (e.g. Geddert’s explanation of 13:33–37 is helpful, but it is perhaps rather subtle to see a pointer to Jesus in the doorkeeper, and it may be that a slightly more source-critical and slightly less redaction-critical explanation is in order here; also the point of the passage is surely to be awake for the unknown moment of the Lord’s return). I also wondered if Geddert’s welcome stress on the meaning of the text in the context of Mark’s gospel led him to neglect the importance of the historical background to a passage like Mark 13:14: that verse needs to be read in the light of the devastating events of 167 bc—the setting-up of the ‘desolating sacrilege’ by Antiochus IV and the Maccabean rebellion—which were so important for the Jews of first-century Palestine living under a pagan emperor.

In brief, not a beginners’ book, but a particularly stimulating and helpful work that deserves careful weighing by all serious students of Mark’s gospel.