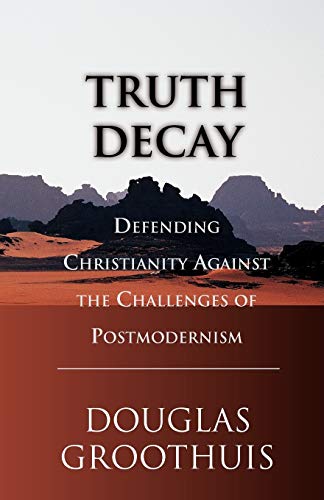 Truth Decay: Defending Christianity Against The Challenges of Postmodernism

Truth Decay is a book which repays a careful read. It is an excellent Christian primer on postmodernism and is very helpful for developing Christian thinking and responses to contemporary theory and culture. It is ideally suited for the thoughtful student of theology but would also be of great value to university students in the Arts and Humanities as well as church leaders and Bible teachers keen to understand the theoretical issues underlying the spirit of the age.

In the first section Groothuis explains in four chapters why biblical concepts of truth are in jeopardy; how we have moved from modernism to postmodernism as broad categories for understanding Western culture; sets out a Christian view of truth based on correspondence with reality; and finally compares Christian and popular concepts of truth, noting the contemporary tendency to redefine truth according to use value.

In the second section the book moves to consider the dangers of a postmodern view of truth when it is allowed to shape our theological and apologetic agenda. One of the main concerns of this section is to demonstrate that truth is ‘irreducibly propositional’. Even when presented as narrative, poetry or parable, Groothuis understands all genre to be dependent on underlying proposition to communicate anything truthful. Propositional revelation is essential to obedience. Without it we are left with little other than vague mysticism. The book engages with Christian thinkers Groothuis believes to be in danger of dismissing propositional revelation and of submitting their thinking to relativistic postmodern assumption. The work of Alister McGrath, Stanley Grenz, Lesslie Newbiggin and William Willimon is evaluated at some length.

It is the third section that raises Truth Decay above the level of much recent writing on postmodernism. Here Groothuis examines the relationship between contemporary theory and several key academic and social disciplines: ethics, race, gender and art. The chapter on ethics is one of the best short introductions to the complex area of postmodern ethical theory I have read. His argument based on authoritative propositional revelation concludes powerfully that relativist ethics is fundamentally flawed because it cannot speak authoritatively across the boundaries between individuals and those between communities. Community and ethics can only rightly be founded on revelation: ‘only if ethics were something transcendent could law be based on more than human arrangements and therefore be authoritative’.

The chapter on race and gender deals well with these subsets of current ethical discussion. As in the chapter on ethics Groothuis demonstrates that it is impossible to value other races and the other gender without truth. Far from valuing race and gender he shows that, by insisting that each community only ever speaks contextually to that community, postmodern theory marginalises the very people it is seeking to empower. He deals well with the fashionable argument that while sex is biological gender is a social and political construct. The Church seems to oscillate on issues of race and gender between being way behind the times and being so keen to be up to date that we swallow the agenda of the world. Groothuis treads a careful biblical path between the two.

In the chapter on art the book suggests that evangelicals have traditionally evaluated art simply on the grounds of whether it is moral or immoral. This, Groothuis claims, is inadequate. He sets out an approach to art that starts with God having aesthetic sensibilities.—He has things to say about truth and beauty, falsehood and ugliness—as well as moral ones and uses this framework to conclude that art is open to objective evaluation.

Any criticisms of the book are minor. At times Groothuis puts a little too much stress on the philosophical enterprise as the best way to counter postmodernism. For example while maintaining that final truth is only available through revelation he in no way develops this as much as he does a philosophical reliance on correspondence. I would have liked more on how revelation is true because it is based in the character of God, and the implications for Christian engagement with culture of not holding the Bible to be authoritative. At times too there could have been more engagement with contemporary theorists. I felt this particularly in the chapter on ethics where the book fails to distinguish between ethics and morality—a distinction close to the heart of all postmodern theory on the subject.

I thoroughly commend Truth Decay. The knowledgeable reader will find nothing new in the first half but much to provoke thought in the second. Everyone else will find Groothuis’ description and evaluation of postmodernism and truth illuminating.