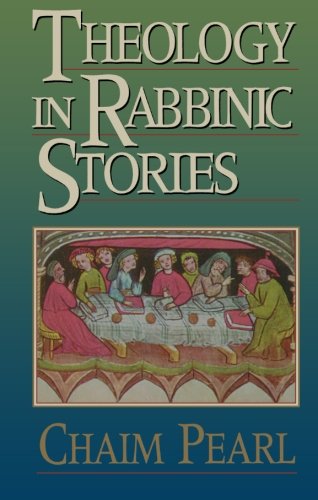 ‘Rabbinic literature is divided into two chief parts, called halakah and aggadah. The first is the legal discussion and decisions; the second comprises all the rest. In this volume we are concerned with the second part, the aggadah’. Here in the introduction to this fine book, Chaim Pearl, until his recent death the grand old man of modern Judaism, spells out his subject. The book consists of seven sections: Beginnings (on God and creation), Torah, Aspects of Jewish History, Ethics, The Mysteries, The Nations, and Miscellaneous. Of these, the second, third and fourth sections are the longest. In all, there are fifty 2–4 page portions, each of which contains a paraphrase of the story under discussion, an explanation of its origin and characters, and appraisal of its role within Jewish tradition and doctrine, and an application to contemporary Judaism.

There are three striking emphases in the book. The first is the emphasis on ethics. Almost every page is soaked in ethical concern, and there is contempt for so-called piety that does not issue in concrete behaviour (86). Interestingly, however. Pearl argues that self-sacrifice is not required by rabbinic teaching, though ‘there is still room in Judaism for the ideal of selfless love’ (94).

Secondly, Pearl is careful to articulate where his authority lies: his is ‘a Judaism which appeals to reason’ (5), but he is also careful to ground many of his expository observations in scripture. On the other hand, twice in the opening pages, he makes clear ‘that our Judaism does not rest on the Bible as it has been interpreted throughout the ages’ (20), or ‘as it has been interpreted and developed in the course of history and tradition’ (28). This is exemplified in the story where Moses is permitted to see into the future, and hear Rabbi Akiba expounding Torah. Moses was sad, thinking that his Law had been forgotten and replaced by another. But hearing Akiba say that the source and authority for his teaching was the Torah given at Sinai, Moses was reassured (19).

Pearl’s aim is to discern the authentic voice of Judaism, uncontaminated by the influences of Greece and Rome in the early period, and Babylon in later times. This is sometimes clear, but sometimes involves exploring the contradictory voices of the tradition and allowing both to stand.

Thirdly, there is the question of suffering which dominates the book. The central problem for religious faith is why God allows suffering’ (67). Reference is made in particular to God’s participation in the nation’s sorrow. For example, when a man reports to Elijah that he heard God weeping over the exile and the destruction of the Temple, Elijah replies; ‘I swear that such a divine lament is heard not just once; but three times every day God mourns like that’ (67). The holocaust is a constant point of reference in the book, as is the persecution that has characterised the history of Judaism down the ages.

But while the content is extremely serious, the way in which the stories are told is quite delightful. This is one of the great strengths of the book. It is extremely easy to read, with the narratives reproduced in folk-tale style. The charm of the story-telling, and the often profound expositions combine well. There is the occasional quirk: Pearl has a strange approach to the historicity of the accounts, for example. The evidence is innocent until proven guilty, though he is essentially anti-miracle (139), and recommends a rationalistic approach to interpreting them: so the origin of a valley filling up with gold coins came perhaps ‘as the glow of the setting sun fell on the stones’ (83).

Students should not look to this book to contribute to their understanding of Judaism in NT times: this book spans a much broader time-frame. However, there are some interesting snapshots of the first-century, featuring Rabbis Hillel, Shammai, and Johanan ben Zakkai. In view of the crises of Roman occupation and the destruction of the Temple, what comes across is an anxiety among the rabbis for the future of Torah-study as the only guarantee of the future of the nation. The book is thoughtfully and humorously put together, and the blend of charm and depth is very salutary. It is an enjoyment to read.