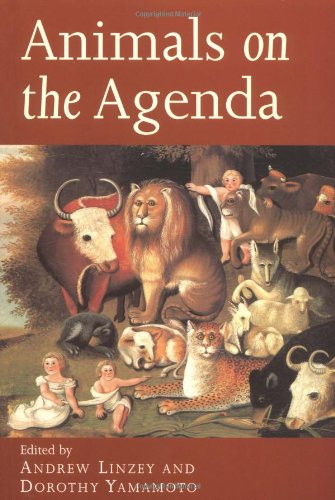 Animals on the Agenda

Whenever theologians detect a cultural bandwagon rolling by, it is difficult to resist the two equally dangerous responses of jumping on for the ride, or turning our backs. Historically the church, especially evangelicalism, has often done the latter; finally turning around to find that society has almost disappeared over the horizon. Andrew Linzey has clearly decided that Christians need to decisively ‘climb aboard’ the animal welfare movement, which, in its British form, resembles not so much a bandwagon as a juggernaut. His many books attempt to establish the single point that most of historic Christianity has shown scant concern for animals but that the Bible itself has a much more positive attitude towards the creation in general and animals in particular. Andrew Linzey demonstrates his clear agenda by entitling his introductory chapter Is Christianity Irredeemably Speciesist? The prior labelling of ‘mainstream Christianity’ as ‘speciesist’ and his assumption that the church needs ‘redemption’ from this view leaves us in no doubt about the purpose of the book.

Animals on the Agenda began life as a research project of the Centre for the Study of Theology in the University of Essex. It comprises twenty short papers divided into four parts: ‘Understanding Scriptural Perspectives’, ‘Wrestling with the Tradition’, ‘Disputed Questions’ and ‘Obligations to Animals’.

Part one deals with biblical issues. Generally the articles are disappointing; seeking to understand both the Old and New Testaments in terms of conflicting traditions with no serious attempt at a unifying biblical theology of creation. Richard Bauckham’s analysis of the evidence in the gospels is a welcome exception to this. Bauckham argues that at least some first century Jews were concerned for the ethical treatment of animals and that Jesus assumes that such compassion was good. He shows how Jesus uses rabbinic qal wa-homer argumentation to portray God as both intimately concerned for animals, but even more concerned for humans. Thus Jesus himself seems to steer between the animal liberationist view, which ascribes equal rights to animals and the view of many Christian theologians of the past, who saw animals as solely created for the utility of mankind.

The second section comprises four articles dealing with Christian: tradition. Some aspects of Augustine, Aquinas, Luther and modern Roman Catholicism thought are each examined. The articles are by no means comprehensive either in their individual topics or in their overall coverage, though they do serve to bring a little historical perspective.

The third section of the book deals with theological and philosophical issues, whilst the final section comprises some stimulating and informative essays on the contemporary situation from evangelical. Anglican and Roman Catholic perspectives. It is in the third section that the diversity of presuppositional frameworks becomes clearest. Stephen Clark makes a strong case for re-establishing a classical theistic worldview as the only truly viable way forward. Several other contributors, on the contrary, advocate a major revision of our whole view of God towards the panentheism of process theology. Here we come to, perhaps, the major limitation of this work. It is not a debate since there is no interaction between contributors, nor does it set out to make a single coherent case. The common denominator between contributors is simply that they function broadly within the Christian tradition and they have a concern for animal welfare. The different essays in fact serve to illustrate the massive divergence of worldview between those who share a common instinctive compassion for the animal kingdom. Perhaps in order to give some coherence to the book, each section has an introductory essay from Andrew Linzey. However this reviewer is not convinced that Linzey always gives a fair summary of the articles and there is no doubt that his agenda is to challenge all statements which in any way nuance the case for animal welfare.

Overall the book deals with a wide range of issues, though in a patchy and sometimes contradictory way. In many ways it highlights the fact that, both within the Christian world and beyond it, the animal rights movement is a campaign in search of a worldview. The patchiness of this book means it will not serve as an introductory primer but for those already wrestling with the issues there is much food for thought.