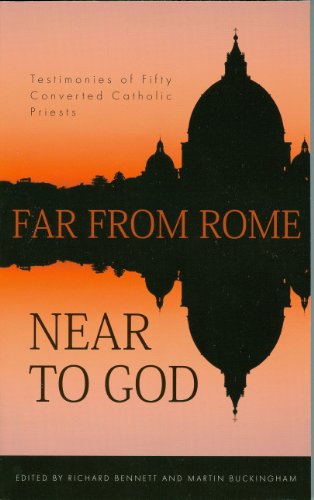 Far from Rome, Near to God

Written by Richard Bennett and Martin Buckingham Reviewed By A. T. B. McGowan
Biography

This book contains the stories, written by themselves, of 50 Roman Catholic priests who have been converted. Each of the testimonies contains a description of how the priest came to recognise certain key elements of biblical Christianity which he had not previously understood: that salvation is by grace; that justification is by faith; the significance of the Bible; and the failure of the Roman Catholic Church to teach these truths.

The authors are involved in organisations which seek to evangelise Roman Catholics. Martin Buckingham is the director of ‘The Converted Catholic Mission’ and Richard Bennett is director of a similar organisation in the USA, the ‘Berean Beacon of Oregon’.

It is always good to read of people who have come to a knowledge of the deep truths of the faith for the first time and to be challenged afresh as to our own understanding and proclamation of these truths. To that end the book is helpful and reminds us of the essential elements of any truly biblical experience of grace and salvation.

It has to be said, however, that after the first five or ten testimonies, the book begins to pale. It is simply too repetitive. One can see the value in the organisations which the authors represent keeping a record of the testimonies of converted priests but to publish them in this manner will test the perseverance of most readers.

It is also disappointing that most of the priests whose testimonies have been chosen are those who studied before Vatican II. The picture of the Roman Catholic Church which is presented, therefore, is of a Church which many would say has since changed significantly. This is not in any sense to suggest that the modern Roman Catholic Church has a different view of grace and salvation from the pre-Vatican II Church, but there have been important changes of emphases and a greater openness to the Bible and to ‘separated brethren’. It would have been good to have heard from more recent converts.

At a time when the ‘Evangelicals and Catholics Together’ movement has sparked such fierce battles in the evangelical world (and this reviewer’s sympathies are more with R.C. Sproul than with Coulson and Packer et. al.) it does no good to pretend that the modern Roman Catholic Church is identical in every respect with the medieval or even the 17th century Roman Catholic Church. We need to engage critically and biblically, but honestly and wisely.

This book is a heart-warming record of the salvation of a number of individuals who have discovered the grace of God in the gospel, but it contributes little to a better understanding of the present Roman Catholic Church and may even be judged to give a false impression.