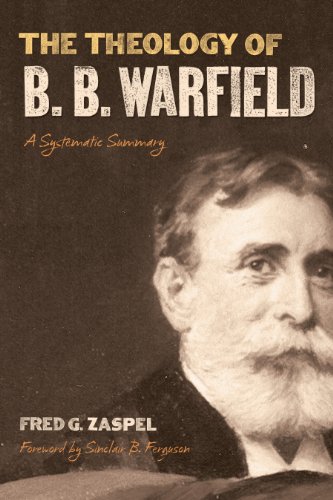 The Theology of B. B. Warfield: A Systematic Summary

The adjective “magisterial” is perhaps used more frequently than it should be to describe the writings of contemporary theologians. In the case of the present volume, however, its use is more than warranted for at least two reasons. In the first place, The Theology of B. B. Warfield represents the best summary to date of the views of one of North America’s greatest theologians on the standard theological loci. This is a particularly noteworthy accomplishment because Warfield was, as Sinclair Ferguson notes in the foreword, “a scholar of Renaissance-man proportions” (p. 16) who wrote “at the highest scholarly level in the areas of biblical studies, Patristic theology, Reformation theologians, confessional history, and biblical and systematic theology proper” (p. 15). Second, The Theology of B. B. Warfield is a landmark volume that establishes Fred Zaspel as one of our leading authorities on the life and thought of the theologian who has come to be known as the “lion” of the Old Princeton theology. Incisive, comprehensive, and beautifully written, The Theology of B. B. Warfield does not merely compile quotations culled from Warfield’s voluminous writings, stringing them together and then sprinkling them with occasional commentary. Rather, it systematically synthesizes Warfield’s entire theological corpus that is grounded in years of meticulous, painstaking analysis of the primary sources, an integrative masterpiece that presents the reader with a compelling approximation of the systematic theology that Warfield would have written had he believed that he had been called to the task of theological construction.

For years, scholars with an interest in the history of North American Christianity have lamented that not only did B. B. Warfield never produce a systematic theology of his own, but also no competent scholar has ever produced “a comprehensive account” (p. 19) of his theology either. The Theology of B. B. Warfield admirably fills this “void” and in the process “reintroduce[s] Warfield to today’s theological discussion” (p. 19). Following a biographical analysis that situates Warfield in his historical context, Zaspel sets himself to the largely descriptive task of “condensing his whole thinking on the various theological themes” (p. 20) so that students and scholars alike can view Warfield’s theology “from a global perspective” (p. 19). While Zaspel is clearly a sympathetic interpreter who is eager to clarify “misunderstandings or misrepresentations” (p. 21) of “the views Warfield actually held and the arguments he advanced in their support” (p. 20), nevertheless, he is neither a fawning partisan nor an uncritical ideologue who is reluctant to challenge the conclusions of his theological mentor. For example, while carefully establishing what he calls Warfield’s “critical agnosticism” (p. 386) on the topic of evolution, Zaspel remains skeptical of Warfield’s insistence that Calvin’s doctrine of creation “was not simply evolutionism but ‘pure evolutionism’” (p. 384). Indeed, he acknowledges that Warfield’s interpretation of Calvin “is open to question,” and he consequently concedes that there is some plausibility to the claim that Warfield was an evolutionist because “Warfield does represent Calvin as teaching a doctrine of evolution, and it is quite tempting to see in this a reflection of Warfield’s own leanings” (p. 384). An additional and perhaps even more obvious example of Zaspel’s capacity for critical distanciation is that he remains a convinced Baptist after having carefully considered Warfield’s arguments in favor of infant baptism (pp. 515–22). Apparently, Warfield’s presentation is compromised by what Zaspel believes are “conflicting ideas” (p. 519) regarding the final status of children within the covenant.

Among the many strengths of Zaspel’s unparalleled analysis, two are especially worth mentioning. The first has to do with Zaspel’s willingness to challenge the sacred cows that attend the historiography of Old Princeton in general and B. B. Warfield in particular. For example, with respect to the common charge that Warfield denied “human inability and the utter necessity of divine initiative” in order for sinners to embrace “the indicia of the divine origin of Scripture” (p. 156), Zaspel demonstrates that the work of the Spirit plays a decisive role in every aspect of Warfield’s religious epistemology, including his understanding of how the unregenerate come to appreciate the spiritual significance of biblical evidence. In short, Zaspel establishes that Warfield’s simultaneous and consistent affirmation of both the “self-attesting character of Scripture” (p. 154) and the absolute necessity of the testimonium Spiritus Sancti undermines the force of the common charge and proves that it is not just without merit, but altogether curious. “It would be an odd thing indeed for a scholar of Warfield’s stature,” he notes with a measure of justified incredulity, “to be so blind as to hold so vigorously a doctrine that fundamentally opposes another doctrine that he holds with at least equal vigor” (pp. 156–57).

The second strength is related to the portrait of Warfield that emerges from Zaspel’s analysis. Zaspel’s Warfield is neither an Enlightenment rationalist nor a wooden, uncompromising fundamentalist, but an advocate of “progressive orthodoxy” who embodies the ideal for which Princeton Theological Seminary was founded, namely, “a union of the most rigorous academic studies with a cultivation of the deepest evangelical piety” (p. 37). What Zaspel’s analysis makes refreshingly clear is that Warfield was not just a world-class scholar who engaged the life of the mind with confidence because he recognized that “God’s Word is truth, and adhering to its teaching we can never be proven wrong” (p. 556). More fundamentally, he was a “theologian of the heart” (p. 568) who “knew himself to be a sinner rescued by a divine Savior” (p. 563), a “christologian” (p. 289) who was relentless in “theological battle” (p. 555) and unwilling to make concessions “to ideas that contradict the sure Word of God” (p. 557), yet not so rigid that he failed to hold his positions with “generous allowance” for other views when Scripture did not speak “with clarity” (p. 399) to one particular topic or another.

Although Warfield was a theological giant whose work continues to speak to a host of contemporary issues with penetrating significance, he “has not been as widely read as he deserves” (p. 575), due in part to the occasional nature of many of his writings. The Theology of B. B. Warfield is a remarkable volume that goes a long way to providing a remedy to this problem, for it is a compelling synthesis of Warfield’s entire theological corpus that captures both the breadth and the depth—as well as the striking nuance—of Warfield’s theological genius. Its appearance is an occasion for celebration not just because of its landmark significance, but also because it makes Warfield’s genius even more accessible to a new generation of readers, readers who will soon discover the enduring relevance of his work to the world in which we live.