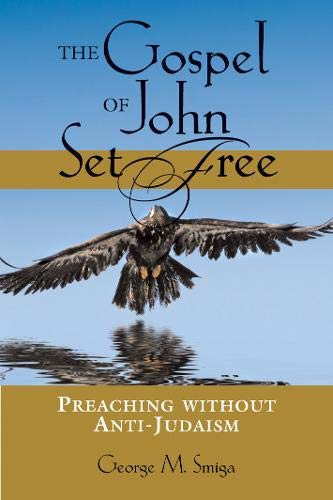 The Gospel of John Set Free: Preaching without Anti-Judaism

The editors of this series of books by the Stimulus Foundation make a big claim in their preface: ‘These books mark a kind of revolution in the church’s reading of the gospel. For here, as never before in a concentrated way, the reader is invited to consider how to read the gospels and epistles free of anti-Jewish sentiment’ (p. ix, italics original). This series, therefore, emphasizes the importance of seeing the NT in its Jewish surroundings and how much Christians have come to read them in an anti-Jewish way.

All this is applied specifically to the Fourth Gospel by George Smiga. He sets out twenty-five passages from three cycles of the Roman Catholic lectionary, accompanied by critical commentary designed to highlight the historical, literary, and theological implications of the text. There are also rabbinic comments added to make clearer the Jewish background of the text and applied to specific passages in this Gospel to demonstrate how Jewish it is and effectively how good and faithful a Jew Jesus was in his life and teaching. There are also discussion questions that can be used in Bible study groups.

There is much here that is helpful. It is valuable to read the Fourth Gospel in a way that is faithful to first-century eyes. Smiga draws out how so often in the past, this Gospel has been misused to support an anti-Semitic attitude. There is a need to examine the specific passages of the Fourth Gospel which have at least the appearance of being somewhat negative towards the Jews in their attitude towards Jesus and to ask what is really occurring.

Smiga has a helpful section assessing carefully what the term hoi Ioudaioi refers to (pp. 16–21). He notes it is usually translated ‘the Jews’. But he comments, helpfully, that it is important to differentiate between a ‘neutral’ and a ‘polemical’ use of the term. He lists John 5:1; 11:45; and 19:20 as examples of the former, and he discusses some of the thirty-one occurrences of the latter, which cause more difficulties. In answering the question, ‘To what group does the term refer?’ in these polemical uses, he notes that it is important to say that the term never refers to all Jews. He suggests possible referents such as ‘the Judeans’ or ‘the Jewish Temple leadership’. He calls for pastoral sensitivity when the term is used in John and thinks that when the term hoi Ioudaioi occurs, the preacher should state that sometimes it means ‘the leaders of the Jews’ or ‘the adversaries of Jesus’, which would prevent the writer appearing to criticise the Jewish people as such (p. 21).

These comments are generally valuable and valid. Some concerns arise, however, when Smiga considers the possible reasons for the evangelist having used the term hoi Ioudaioi when Jesus faces opposition from the Pharisees, chief priests, or crowds. Basically, he argues that one needs to appreciate that the development of the Johannine community and the opposition it faced have influenced the development of this Gospel and help to explain its theological convictions. These ‘shape the Christological debates between Jesus and his opponents throughout the entire Gospel’ (p. 22). So ‘plots against Jesus in John’s narrative do not accurately reflect an opposition that was levelled against the historical Jesus’ (p. 23). Indeed, we need to recognise that terms used to identify Jesus’ opponents ‘follow the historical stages of the Johannine community, which developed from its Jewish beginnings to an eventual separation from the synagogue’ (p. 18).

As one works through the various comments on readings from the lectionary, frequently valuable comments are modified by remarks that argue for the need to move through the various stages of the Gospel tradition in order to realise how Roman involvement in Jesus’ crucifixion becomes more limited and Jewish responsibility increased as time went on and the Johannine community had more influence on the composition of this Gospel. Thus, for example, the fear of the Johannine community arising from the struggle with the Pharisees at the end of the first century is reflected in John 20:19 (p. 63). In John 4, the origin of the narrative is the likely influx into the Johannine community of a group of converted Samaritans, and thus the story shows a bias towards them; John 4:21–24 demonstrates how ‘the faith of the Johannine community finds every opportunity to extol the superiority of Jesus over the religious claims of its Jewish neighbors’ (p. 72). John 9:22 ‘reflects the experience of the Johannine community towards the end of the first century CE’ and is not to be placed in the time Jesus lived (p. 81). Indeed, any reference to expulsion from the synagogue (e.g. John 12:42; 16:2) is ‘an interpolation into the text, later projected back into this particular story [i.e., John 9:1–41], since expulsion from the synagogue for Christians was not recorded until closer to 80 CE’ (p. 84).

Other commentators on the Fourth Gospel have also presupposed the influence of the Johannine community on its composition. The three-volume commentary by Urban C. von Wahlde (The Gospel and Letters of John), for instance, has thirty-two tables of contents pages in volume one outlining how the commentary looks at three editions evident in the final edition of this Gospel and how one can supposedly identify the material in each edition (and attribute this to developments in the Johannine community). Andreas Köstenberger’s A Theology of John’s Gospel and Letters(Grand Rapids: Zondervan, 2009), however, discusses the ‘Johannine Community Hypothesis’ (on pp. 51–58), the ways it has been challenged in recent times, and locates this Gospel’s composition to a more unified process.

Thus, despite the Pope’s recent book (Jesus of Nazareth: Holy Week: from the Entrance into Jerusalem to the Resurrection Pt. 2) arguing that those responsible for Jesus’ crucifixion were the ‘Temple aristocracy’ and supporters of the rebel Barabbas and that ‘the Jews’ as a people were not responsible for his death, which fits in with many of Smigma’s emphases, as an overall approach to this Gospel, Smigma’s book has its weaknesses as well as being a useful introduction to how one may approach many passages in this Gospel as well as the references to ‘the Jews’.