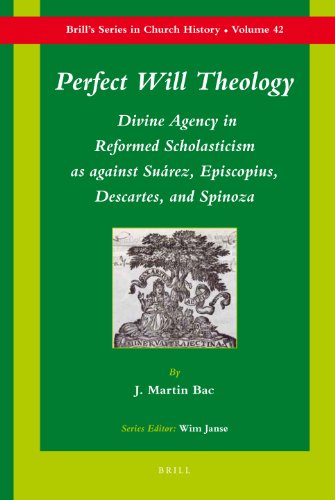 Perfect Will Theology: Divine Agency in Reformed Scholasticism As Against Suarez, Episcopius, Descartes, and Spinoza (Brill’s Series in Church History)

The author is a member of a Dutch research group which has become persuaded of the central importance of the idea of synchronic contingency for an understanding of divine freedom, the contingency of the creation and of grace, as well as human agency. Synchronic contingency is the idea that when God or a human person chooses A, it is possible that they choose B. Such contingency is said to deliver Christian theology from necessitarianism, while preserving the proper influence of Reformed thought on the all-encompassing divine decree.

This influence is largely due to the work of Antonie Vos, who has researched extensively on Duns Scotus, translating, editing, and commenting on his significance for Western thought, culminating in The Philosophy of John Duns Scotus (Edinburgh: Edinburgh University Press, 2006). Some of the research output of this group in English can be found in the contribution of Antonie Vos to Understanding the Attributes of God (ed. Gijsbert van den Brink and Marcel Sarot; Frankfurt, 1999), papers in Reformation and Scholasticism (ed. Willem J. van Asselt and Eef Dekker; Baker, 2001), and particularly in Reformed Thought on Freedom: The Concept of Free Choice in the History of Early Modern Reformed Theology (ed. Willem J. van Asselt, J. Martin Bac, and Roelf T. de Velde; Baker, 2010).

What makes some of their work particularly interesting is that they hold that it is a part of the genius of seventeenth-century Reformed Orthodox theologians to have grasped the true significance of synchronic contingency, and as a consequence they have been able to provide an account of divine freedom, even an explanation of it, that is distinctive and consistent. ‘The five dominant positions of seventeenth-century thought express different modal intuitions about divine knowledge and will. Modern logic enables a more detailed appraisal, which shows that the Reformed model is the only consistent position’ (p. 400). So this view of the will, human and divine, as synchronically contingent, is at the centre. Bac focuses particularly on the divine will. Hence, Perfect Will Theology.

The influence of this idea of synchronic contingency (as it applies to the divine decrees) is evident in the structure of this work. Bac sees this distinctive view of divine freedom as the via media between four other contending philosophical movements prominent in Holland contemporaneously with the flourishing of Reformed Orthodoxy: the extreme voluntarism of Descartes, the necessitarianism of Spinoza, the Arminianism of Episcopius, and Suárez the Jesuit. The significance of synchronic contingency is that while God’s decree of a human action makes what is decreed actual, it leaves other actions as possibilities. This feature (and its advantages) is retailed quite a bit, but whether what Bac says is convincing is another matter.

That apart, without doubt one of the most useful contributions of Bac’s work is the extensive attention he pays not only to Melchior Leydecker, who is prominent at the start of the book but who rather fades from the remainder, but also to William Twisse and Gisbertus Voetius. It is particularly valuable to have large chunks of Twisse’s scholastic writings made available in English. He also offers informative discussions of Descartes and Spinoza, and takes the reader through a fascinating discussion of the question much discussed in the seventeenth century: is the time of a person’s death fixed? In my judgment Bac offers illuminating commentary, with a reservation to be entered below.

For much as I would warm to the idea of Reformed Orthodoxy committed to synchronic contingency and being thrust into the centre of things, Bac is far from demonstrating this fact or coming near to it. For success requires that he demonstrates that the Reformed Orthodox view of divine sovereignty is consistent with synchronically contingent freedom, and I do not believe that he succeeds in doing this.

There are a number of interrelated reasons for this. The first is that whenever the Reformed Orthodox (such as Twisse) use the term ‘indifference’, Bac not unnaturally assumes that the reference is to the Scotian synchronic contingency. But the evidence cited (p. 434; see also, e.g., p. 199) warrants only the less strong conclusion that God’s providence in which he ‘determines the creaturely world’ is consistent with the exercise of creaturely wills. Bac leaves himself with the problem of how libertarian freedom (which he believes the Reformed Orthodox reject) differs from the power to the contrary choice (which he thinks, wrongly in my view, that the Reformed accept).

A second reason is that at crucial places the author simply brushes aside modern work on the idea of freedom—libertarianism, determinism, compatibilism, and so forth. ‘The present debate on free will is much too simplified by the common distinctions of (in)determinism, (in)compatibilism, (non)libertarian freedom’ (p. 457). Yet he himself uses these terms. And in the passage that follows, the idea of dependent co-causality ‘grants human persons a rather libertarian kind of freedom, but at the same time enables a strong doctrine of providence’. What is this ‘rather’ libertarian freedom? No doubt there are differences between modern compatibilism and the essentialist compatibilism of the Reformed Orthodox (as I believe it to be employing a faculty psychology). Bac asserts, ‘The notion of superior and inferior cause allows creatures to be subject to God without losing their own causality’. No one doubts the essential superiority of divine intentionality. But is there an argument for the claim that transcendent divine causality is a causality that is consistent with synchronically contingent freedom that does not beg the question? As it stands I am afraid that these assertions amount to little more than a wish list. Success in showing the consistency of such a position, essential to successfully defending the distinctiveness of the Reformed Orthodox on the point, seems some way off.

It might appear churlish to complain of paucity in a work which provides so much, but the point is crucial. The Reformed view, with the centrality of the divine decree, is routinely charged with theological determinism and with making God the author of sin. If these charges are unfair because they fail to take account of the Reformed Orthodoxy’s adherence to synchronic contingency in its doctrine of God or that God’s primary causality is consistent with creaturely synchronic contingency, then Bac ought to show us why this is. His chapter on the issue of consistency cannot be regarded as a success.

It is not that the author is unfamiliar with modern discussion, for he devotes attention to the work of Alvin Plantinga and others on the problem of evil and has interesting things to say in comments on this. As the book progresses, the work moves increasingly from its original historical nexus to more general theological and philosophical discussions. Bac tells us, for example, that he personally espouses a version of Augustinian universalism, and he offers reasons for his view. The work would have been better integrated, and perhaps more persuasive, had he spent his expertise in showing why, say, the rather negative answer that William Rowe gives the question posed in the title of his work, Can God be Free? (Oxford University Press, 2004),is ill-judged. The book is not cited in Bac’s bibliography.

The third reason is that, as I mentioned earlier, Bac overstates the contribution of Reformed Orthodoxy to the topic of divine freedom and the contingency of the creation. Catholic Christianity has traditionally espoused the contingency of the creation. Why then single out Scotus and Reformed Orthodoxy for special mention? It may be that Bac and his confrères believe that the idea of divine synchronic contingency explains divine freedom in a way that has otherwise been kept from this catholic tradition. But far from explaining anything, the invocation of synchronic contingency reinforces the mystery. For God (for Scotus and Reformed Orthodoxy, to look no further) exists timelessly eternally. The various ‘moments’ of the divine life that Twisse, for example, makes use of, are distinctions of human reasoning designed to clarify our thinking about synchronic contingency. But there are no temporal moments to the divine life, only logical, structural ‘moments’. Twisse understood this, of course. It is one way that he has of drawing attention to divine aseity and self-sufficiency. But this goes no way to telling us how the divine mind works, nor how God might have had a good reason for creating some alternative state of affairs to the universe he created, any more than does the bald claim that there is no self-contradiction in supposing that God might have created otherwise than he did.

The great thing about Perfect Will Theology is that even if these criticisms are cogent, Bac has nonetheless successfully provided a rich vein of textual data not otherwise easily available, together with a skillful and interesting commentary on it, and a wide-ranging discussion of the consistency of these and allied matters, such as theodicy. There is enough that is right about the book to make the rest intensely interesting as well. We must be grateful to the author for all that.