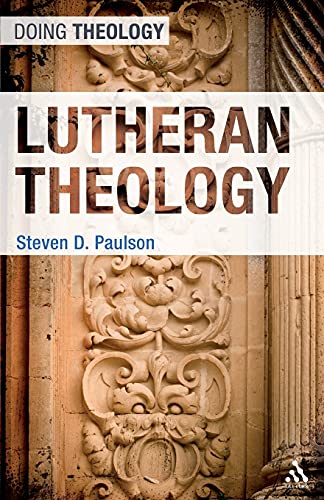 “When Lutheran theology is worth its salt it is always offensive and perverse” (p. 4). So states Steven Paulson, professor of systematic theology at Luther Seminary, about Lutheranism’s “attack on virtue”—though one senses Paulson would say that this is part and parcel of Lutheranism itself. In this volume, part of T&T Clark’s Doing Theology series, Paulson takes up the task of setting forth the distinctive theological vision that owes its name to the sixteenth-century reformer, Martin Luther. Luther was a polarizing, radical figure in his own day, and Paulson seeks to hold Lutheranism accountable to the radical edge in Luther’s thought, which has as its basis that God in Jesus Christ justifies the ungodly by faith alone, apart from works and law.

Paulson lays out the work in the classical style of loci, using Romans as a template for discussing doctrine, as Melanchthon famously did and others following him—that is, until modern biblical scholars argued that Romans was not a compendium of doctrine, but an historical document with a specific purpose. Paulson knows this challenge, but understands Lutheran theology as the “unfinished business” of “commentary on Paul’s letter to the Romans” (p. 15). Thus, for example, chapter 4 (Rom 3) focuses specifically on Christ’s atoning work and its foundation in the christological doctrine of the communication of attributes (communicatio idiomatum), chapter 8 (Rom 7) on freedom from the law and the Christian life as simul iustus et peccator, while chapter 12 (Rom 13–14) looks at the doctrine of the Two Kingdoms and how Christians are both to participate in and resist earthly, temporal authorities. The arrangement is straightforward, but gives a certain vibrancy to the flow of Paulson’s argument as he attempts to present Lutheran theology and navigate Paul’s letter in a coherent manner as the same task. It is not Paulson’s structure, however, that makes this book special, but rather his single-minded insistence on a number of themes important in the Lutheran tradition. I will briefly summarize a few of these.

First, justification by faith alone and the right distinction between law and gospel. As Paulson states, “The key to any theology, especially done the Lutheran way, is to ask what role the law plays in its system” (p. 4). The role law plays in Paulson’s presentation is twofold. Law’s “alien use is to preserve and sustain life in the old Aeon until the preacher arrives” (p. 172). In this role, law preserves by giving order, but does not give life. In its proper (or theological) use, however, law magnifies sin and exterminates any possibility for salvation other than Christ. These two uses simply are what law does, no more and no less. Paulson seeks throughout the book to point out the error of believers when they allow law and works to play any role in salvation by smuggling a “Legal Scheme” into the gospel. While avoiding and arguing against antinomianism, Paulson’s mission is to expound the “Lutheran passion on earth” (p. 5)—distinguishing between law and gospel.

Second is the role of the preacher and the Word. “Luther’s great discovery” was, according to Paulson, “that preaching has always and only been the thing that makes faith, and so justifies” (p. 9). Likewise, “Preachers do not come with information about an election done elsewhere, outside of time; preachers actually do the electing here and now, in the present” (p. 25). This emphasis rests on the belief that preachers announce the two-fold Word of God, which, in distinction to human words that merely signify, actually kills and recreates sinners. Preaching reveals Christ and makes a hidden God no longer hidden. For Paulson, time is split between the time before the preacher, during which the person is under God’s wrath, and the time with a preacher when Christ forgives sins (cf. p. 16). “Faith is created by a promise that comes externally, as an alien word” (p. 119)—externally through a preacher by the will of God.

Third is Luther and the history of Lutheranism. Paulson thankfully does not set up the work as a Lutherans-versus-Reformed-or-Catholics treatise—though distinctions necessarily happen here and there—but rather, in a surprising move, focuses his critique on his own tradition. Paulson sees the history of Lutheran theology as “an attempt to tame the wild animal of the end of the law, consequently an attempt to tame Luther himself” (p. 5). Paulson breaks up the history of Lutheran thought into four “episodes” (literal, allegorical, tropological, anagogical), with Luther representing the “literal” stage and the other three trying to figure out what to do with him; but the main solution is to readmit the law into God’s salvific act in Christ. Consequently, past Luther, no thinker is safe from Paulson’s critique. On the positive side, Paulson demonstrates the vitality of a tradition that is open to interpretation and thus self-critique. However, the negative effect this has is that the reader is left wondering which Lutherans, if any, can be trusted beyond Luther and Paulson.

But beyond this small quibble, which does not really detract from the work itself, I can speak only positively about the book. The occasional different theological judgment is to be expected, but Paulson sets about the task of explaining Lutheran theology not by rigidly moving from historical point A to theological point B, but by engaging with Paul and Luther and seeking to show the deeper logic behind why Lutherans believe what they do. And given Paulson’s high view of preaching, it is no surprise that this book reads as proclamation—very dense proclamation, of course. The result is engaging writing that will benefit the student, lay person, and scholar. Readers of any category could not ask for much more.