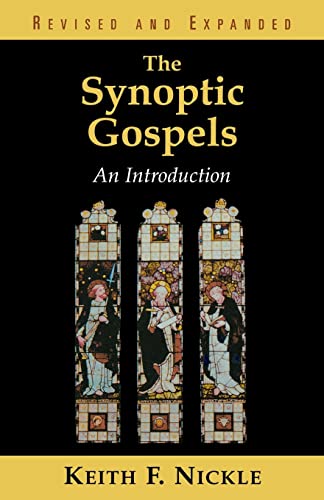 THE SYNOPTIC GOSPELS: AN INTRODUCTION

This second edition of the already popular Synoptic Gospels: An Introduction represents another addition to the burgeoning NT textbook market. It offers a very basic introduction, probably aimed at the first-year theological student. It has the great merit of being a clear guide to many of the basic issues in Gospels studies, although there are on the other hand a number of problems with the treatment of the Synoptics overall.

In terms of coverage of the basic territory, the book does a good comprehensive job. Chapter 1 consists of a discussion of the oral tradition underlying the Gospels. Nonetheless this is marred by the assumption that early Christians did not distinguish between sayings of the historical Jesus and oracles delivered by Spirit-inspired early Christian prophets. Nickle is also rather too impressed by the powers of form criticism, talking of the ‘tremendous assistance that the definition by form-critical scholars of categories of the oral tradition has provided for the study of Jesus traditions’ (27). The example is given of the forgiveness and healing of the paralytic (Mark 2:1–12), which according to Nickle originally consisted of two stories subsequently merged together. This reviewer at least finds such an explanation of Mark 2 neither convincing, nor of tremendous assistance.

Chapter 2, ‘In the Background of the Gospels’, is more useful, providing a brief account of some of the key aspects of the Jewish and Graeco-Roman context of the Gospels. Here there is something of a focus on the different groups within Second-Temple Judaism (Pharisees, Sadducees, etc.) at the expense of the equally important institutions (Law, Temple, etc.), but in general the material is solid. In particular, there are a number of very useful charts that enable quick consultation of dates of Jewish rulers, Roman emperors and governors.

In terms of Nickle’s material on the Synoptic Gospels themselves (chs 3, 4 and 5 on Mark, Matthew and Luke respectively), again the advantage is of clarity, with a mixture of exposition and useful data for reference, such as the proportions of Markan verses used by Matthew and Luke, a summary of the Lukan special material and so forth. However, there are also negative aspects. In the discussion of Mark, Nickle talks (unnecessarily) of a decrease of urgency in the message of Jesus which accompanies the transition from oral proclamation to writing (73–74). There is also a silly comment about Mark’s Greek style (105), in which his description of events in the present tense is likened to a child talking. (In fact the historic present was also used by a number of classical authors.) It is also highly questionable whether Mark was trying to correct or guard against a ‘divine man’ Christology (81). There is some confusion about Luke’s sources (147), and uncritical acceptance of the standard view of the Matthean, Markan, and Lukan ‘communities’ (e.g. 104, 159, 167). On a positive note, there are useful (detailed) outlines of the structures of each Gospel. After treating the Gospels, in chapter 6 Nickle briefly summarises the significance of the Apostolic Fathers, the NT Apocrypha and the Nag Hammadi library. The book closes with a discussion of the place of the Synoptic Gospels in the canon, and their authority.

Unfortunately, there are no indices of authors, subjects, or Scripture references, which limits the usefulness the volume somewhat. But while the book has the advantages of clarity and simplicity, students will be better serve by the more solidly evangelical introductory textbooks such as C. Blomberg’s Jesus and the Gospels, or S.Walton and D. Wenham’s Exploring the New Testament Vol. 1: Introducing the Gospels and Acts.